What Dad is doing

So I'm in Kansas City, and Dad showed me the ship he's making out of cardboard and duct tape. What you see is entirely cardboard and duck tape- absolutely no glue or any other material was used here. Dad says this represents about a month's worth of work: 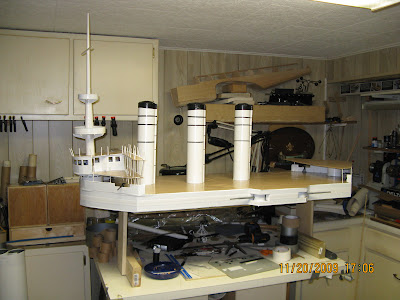 Back to the big scale (42mm Samurai) 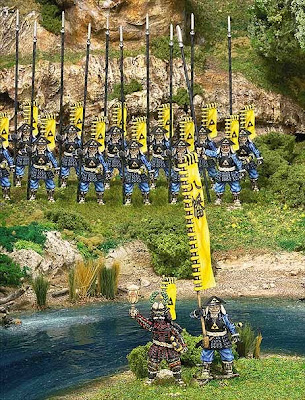 I've placed my order and should hopefully be getting started in the next couple weeks on a new period and scale: 42mm Samurai! Thank you to Steve Barber for allowing me to post a few of the photos from his web site. (Help me pay him back by dropping in and taking a look around his site- better yet, buy something! :) 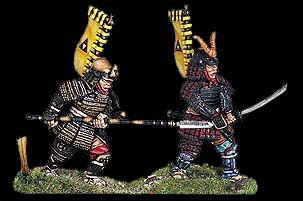 I'm looking forward to this; these will be the first samurai I've ever painted, any time or any scale. This will also be a chance to make some Japanese accessories -- pots, stick bundles, tools and implements, architecture, shrines etc. (anyone have ideas of what else a rural Japanese scene might include?), so now I have another reason to dig the Sculpey back out! I'm not sure if I want to build a Japanese Shinto Shrine or a farm house yet. The house will have more to it and be simpler to build, but the shrine will be smaller (where space is limited) but be a bit more difficult to build (curved wood corners/roof) and I would not have to furnish it.
Hmmm, I think I may go for the house- give me a chance to build a few items to go inside of it.

Hmmm, again, maybe skip the rural scene and build a gambling house; has anyone seen the latest Zatoichi film with the "lights out" fight inside the gambling house?
Well, I have some figures to paint first, so there will be plenty of time to think about it.

How could I forget about these: Steve Barber Samurai

So I was tromping through the internet, looking through all my old haunts, and I came across Steve Barber Models 42mm Samurai range- Holy cow, I love these figures! I remember seeing them when Steve first started selling them. In fact, when I decided to try 40mm scale figures, it came down to HLBS's old west figures, or Steve Barber's 42mm Samurai. I chose the Old west, and it still isn't a decision I regret; there was simply a greater range of figures from which to choose at that time.

But now I see Steve has added a lot more figures to the range since then! So I'll be counting my money, and ghost-shopping figures, working out how much this will cost me. I won't be buying a bunch of the samurai- not enough to make the Hojo Army battle Line seen at Steve's site- but I'll probably pick up between 10-20 figures for a good skirmish game using Two Hour Wargames' Chain Reaction Swordplay rules. Steve does offer up his own skirmish rules; if anyone has played them, leave a comment and let us know how well they play.

Also, with Samurai, I don't plan on building a Japanese town, at least not as extensive as my 40mm, scratchbuilt old west town. But I would like to make a nice little temple/shrine/tea house (something small like this) to place among my large trees (seen here being used in an old west game)- some pretty terrain for some honorable combat.

First thing's first; I have to buy some samurai figures (oh yes, and ninja too)
No comments:
Email ThisBlogThis!Share to TwitterShare to FacebookShare to Pinterest

Just wanted to let y'all know I'll be on vacation for a week or so; I'm gonna use the time to visit parents and get some short stories written up, so there won't be time for painting (and I don't plan on bringing any of my supplies along anyway.

But there is plenty of stuff to look at in the archives, so have a look through before you run off, and I'll be back and painting as soon as I can.

(For your viewing pleasure, here are my finished Games Workshop figures for display ... and some more that are waiting to get some color.

Here's one more for the display shelf. Not my best, but much better than he was. Sometime soon, I'll take an ensemble photo of all the display pieces. Looking back, I wish I had painted the figures to represent each of the city-states/provinces/states of the Empire (for you Warhammer fans who are in the know.) Maybe I'll go truckin' through eBay, and maybe they'll have a bunch of classic metal halberdiers that need some painting.

The other figure is the champion from the previous post after being rebased. MUCH better, I think. I only had to retouch his footwear. 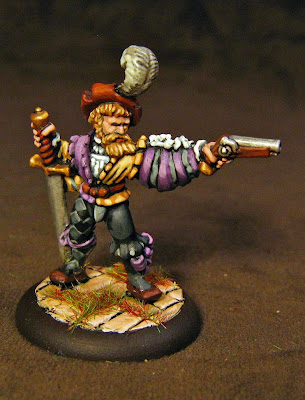 Here are another couple Games Workshop figures. Johann the Knife is a figure from the company's Mordheim range (still available.) I was looking for a figure to be a duelist for D&D and Johann fit the bill, with a minor conversion: I took the knife out of his left hand and replaced it with a cup-hilted rapier. The rapier blade was a length of brass rod I hammered out on a jeweler's anvil. The point was clipped and filed to shape. The cup hilt is simply some green stuff formed around the blade and hand after the blade had been glued in. Duelist!

The other figure is one of my favorite Empire hero minis. I have two of them, one that is captaining a handgunner regiment in my repainted army, and this one, which I will rebase to go along with my classic Empire mini museum. This is one of my better "early" (about 8 years ago) paint jobs. I'd like to preserve the paint during the rebasing process, but if anything goes horribly wrong, I'll have this photographic archive.
1 comment:
Email ThisBlogThis!Share to TwitterShare to FacebookShare to Pinterest

Woops- went a week without updating. No worries, I'm painting. On the table now is Johann the Knife from Games Workshop's Mordheim range. I've clipped the knife from his left hand (the one under the cape) and replaced it with a cup-guard rapier. I made the cup guard from greenstuff and the blade from brass rod hammered out on a jeweler's anvil. The figure will be a duelist rogue for D&D. It's also just a nice little figure to paint.

I reckon' I should get to it!
No comments:
Email ThisBlogThis!Share to TwitterShare to FacebookShare to Pinterest 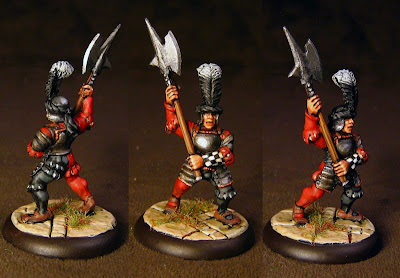 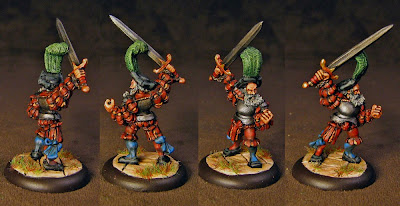 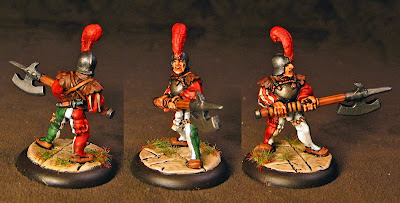 Here are a few figures I painted over the weekend. Nothing new. An armored Big Boris from Heresy, and a few classic Games Workshop Warhammer Empire figures for my Empire mini-museum display. Just a couple more Empire figures to go with that little batch.
Ugh. I have a regiment of 20 halberdiers sitting on my painting table. I need to force myself to start painting them. If I don't get to them, the coming winter should force me into boredom, enough to drive me to put brush to figure.
A quick note: That first halberdier is painted in the colors of my repainted Empire Army -- Red and black with one or two quarters either striped or checkered with white.
1 comment:
Email ThisBlogThis!Share to TwitterShare to FacebookShare to Pinterest
Newer Posts Older Posts Home
Subscribe to: Posts (Atom)