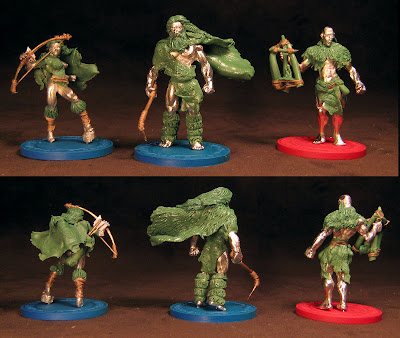 Here are the last (until I order more) figures of my tribe! From left to right, they are an archer (who will serve as the Chief's wife), the chief and the firemaker/holder.

I finally added flights/feathers to the archer's quiver of arrows. that was some frustrating tweezer action, but it got done and looks all right.

The chief still needs some bindings/straps around his waist and leggings, that will be finished as soon as the greenstuff cures. It's difficult to see his stone axe in these pics, but hopefully, you'll get a better view when I do my multiview photo after I've painted him.
For the inside of his fur cape, I plan to paint cave animals (Lascaux style). And the hide he is wearing will get a leopard print paint job.

The fire holder will be left bald (the "spiritual' are bald in my tribe) with a little bit of facepaint. It is difficult to see here, but his fire "lantern" has a little bit of sculpted fire in it. 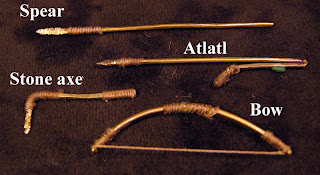 With my next order, I hope to find a decent throwing pose so I can use an atlatl. In fact, I've made some extra weapons including an atlatl I made from one piece of brass rod. I simply bent the rod around and carved out some nicks where the dart meets the thrower. Here, I have a better pic of a stone axe such as that being held by my chief.

So Monday and Tuesday will be priming days. These are the last pics you'll see of the greenstuff. Unfortunately, I won't get around to painting any of the tribe until next weekend at the earliest. But I am excited to get these painted up. I feel good about crafting my own tribe (at least crafting the clothing, equipment and weapons over Bronze Age's great sculpts.) And I think the paint is really gonna pull these conversions together.

I may pick up some more generics and try other things such as fantasy, medieval or sci-fi figures. I won't do whole groups or tribes, but simple one-off figures. And I still would like to add a few more figures to my Waiteri. My usual limit on the number of figures I get in one genre is the number of those figures I can fit into a Chessex figure case. I think the Waiteri, at 54mm, are already close...maybe I'll see how many can fill two Chessex cases.
Email ThisBlogThis!Share to TwitterShare to FacebookShare to Pinterest