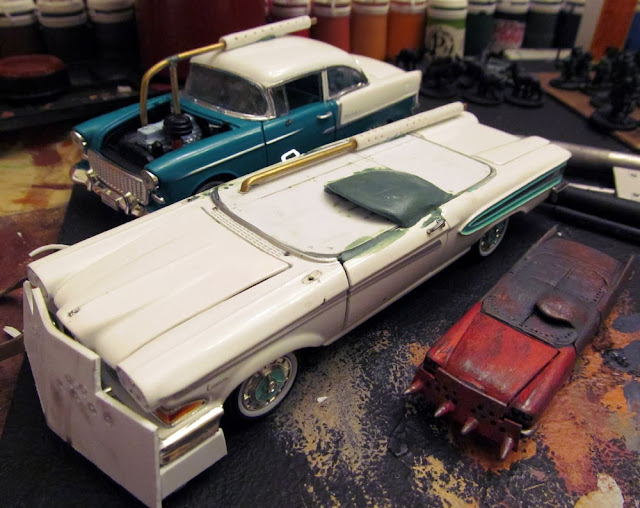 I started (and have almost finished) my last two cars for my 54mm Machinas project.
The first car is the redux of my "Ram" car. The original ram car was based on a Plymouth Adventurer, but I couldn't find one in 1:32 scale, so I chose to base my larger ram car on a 1958 Edsel. The Edsel provides some nice size to make the ram car that much more imposing. 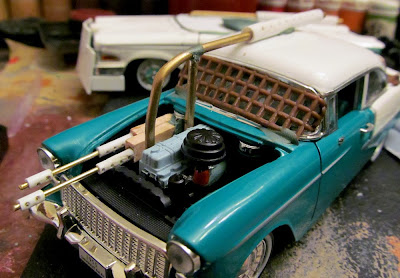 There are a couple other changes to the new ram car: I added a large exhaust tube over the body to help break up the lines. The other change will come later- instead of gray, I will do the body in silver. The car will retain its all-red forward section. I figure the new ram car will simply represent a different evolution

The second car will not be a reproduction of any of my smaller cars. I wanted to do something original at least once in the larger scale. This is a 2-door 1955 Chevy. The most notable addition is the exhaust passed in front of the windscreen and over the roof. I've also added a new engine block that was a little larger than the one that came with the car. And I've added a couple scratchbuilt heavy machine guns.

Though it's not a repro, I will still paint the Chevy in the same colors/scheme as one of my Running Gunners cars (which are almost entirely rust colored and covered with American Indian designs in white.)

Here are a few in-progress shots here. It's all mostly brass rod, plasticard, tubing and greenstuff. Read captions for details: