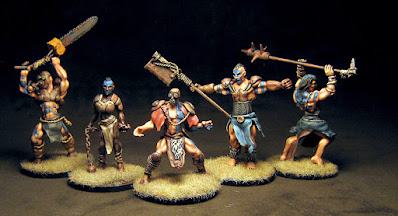 My wife and I have quite the board game collection, as well as a few tabletop miniatures games. She always says, rightly, that we shouldn't buy new games until we've played the old ones. So I've been looking through the old collection and finding all kinds of fun games that I have played (and that have graced this blog before), but that we BOTH have yet to play together: Space Hulk, Blood Bowl, Dreadball, my own Machinas, and this little gem: Qwik. 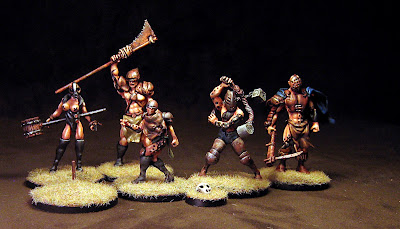 Qwik is a post-apocalyptic sports game (by Two Hour Wargames) based on the game, called Juggers, that is central to the Rutger Hauer (and Delroy Lindo and Hugh Keays-Byrne AND Vincent D'Onafio!) movie: "Blood of Heroes." The best way I can describe Qwik is Quidditch without the brooms and the snitch, or rugby with weapons, or maybe field hockey with gladiators? Check out the wiki for it; there are actual leagues of this game around the world. 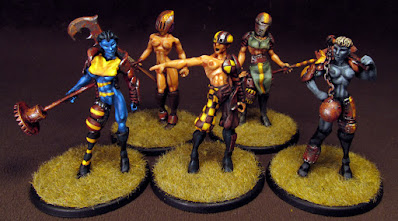 Incidentally, Qwik is not the name of the sport, but the name of the most important player: the qwik, who is the only player on your team who is allowed to handle the "ball," which happens to be a dog skull. There are the "drivers" who batter and attack the opposing team's qwik, as well as the "chain" who does the same but with a little more reach. That's it: Five players, one skull and one dirt-hard field to litter with bodies.
Email ThisBlogThis!Share to TwitterShare to FacebookShare to Pinterest