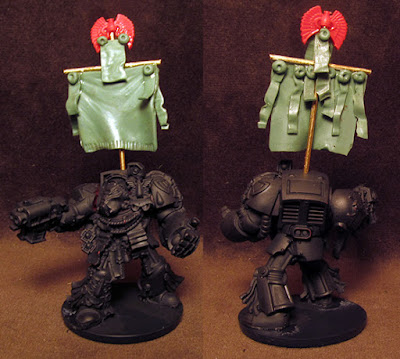 I was tentatively organizing my plethora of terminators last night into squads and realized that with the remaining figures I could probably put together a command squad (probably not GW legal, but will look fine anyway.) But the one figure I needed that I could start on right away was a banner carrier.

So I gathered a little bit of green stuff and rolled out a back banner, capped off with a broken-off Space Hulk bit. I also threw together a bunch of purity seals and parchment. Once everything cured, it all went together quickly.

To go along with the back story of the chapter, the purity seals are mostly kept on the back of the banner to represent the chapter's humility until it proves itself in a major campaign.
In fact, I'm also closing in on a representative icon for the chapter: It will incorporate the symbol of the Aurora chapter along with that of an upside-down eagle to represent the fall of Satys. I'll hopefully be able to paint that symbology on this banner -- it's been a while since I've free-handed it with the minis.

I also ordered some bits to make my own terminator chaplain. I still need to figure out a crozius for him, but he should have enough skulls on him (and self-made purity seals and parchments) anyway to get the point across to the other squad members that this Chaplain means business, crozius or no crozius.

My command squad will have a captain, banner carrier, librarian, chaplain and a fellow with an assault cannon why not.
Email ThisBlogThis!Share to TwitterShare to FacebookShare to Pinterest