To give all the figures a more hodge-podge apocalyptic look, I think I'll work on them one at a time. This will make the project go longer, but it will also help me to concentrate on one figure at a time.
Here, you can see I've added some straps to hold the armor together, and to hold the facemask on. I didn't have any old toothpaste tubes, but I did have this old Neosporin tube. All you need is an Exacto knife and a steady hand (or a straight edge.) It works really well!

The armor came out a little thick on this figure, making him look a bit larger than he should be; then again, he IS a hero of the wasteland, so there's nothing wrong with a bit of extra size. The armor is still a little too "clean" for my taste, so I think I will "wasteland" it up by adding some tatters of clothing, rags, ribbons or other random assortments of old fabric (using greenstuff.)

The weapon has a typical setup for the Driver (one of the player positions for Jugger/Qwik.) The back end (harder to see) with the wheel disk is the "driving" end, and the scythe-like blade is the "sweeping" end. I don't have plans for a "sweeping" end to all of my driver's weapons, but there'll be enough to give a general idea. 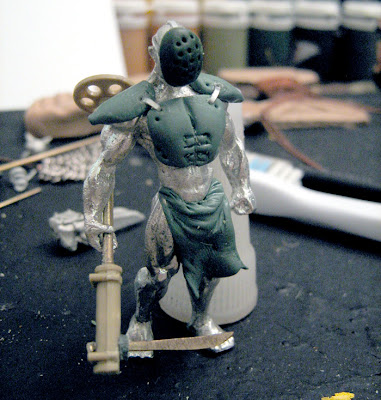 On this figure, I still have to do the backside loin cloth, a pair of boots/(with shinguards), maybe some arm bracers, a belt, a few more straps, and those aformentioned tattered rags hanging from the armor. But it's already been a long morning (and a long celebratory night with the bin Laden news,) so I'm going to have myself a little siesta, now.
Email ThisBlogThis!Share to TwitterShare to FacebookShare to Pinterest