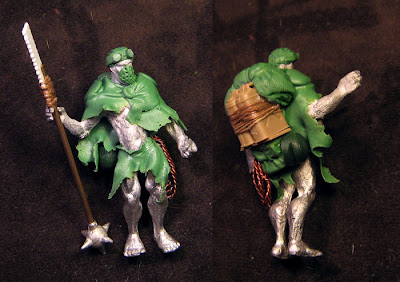 Here's my (nearly) complete freelance jugger Lorn Sands. Last night I finished his pack which is made up of a couple leftover jerry cans (for water) from a Tamiya kit, greenstuff bedroll and pack, some rope/cable (made with copper wire), and a jugger helmet made from Sculpey. To finish him off, I'm gonna have him wear a pair of fur-topped boots (since it's a fairly easy conversion to make.)

I originally wanted to have a dead rabbit hanging off the side of his pack, but I just couldn't get it right. I may try again tonight; there is still space on one side of the pack (above the rope.)

I think this one is my favorite of the bunch. I'm not so keen with the mace end of his driver weapon, so I may make him a new one, but I like everything else about the figure. I think the pack helped give him a better post-apocalyptic look than the others.

Lorn is my last jugger; I'm pleased with the "look" of the teams. My original intent was to have these players deep into the post-apocalypse, so there would be less actual clothing and more rags and skins; no guns (at least as scenic accessories since they wouldn't be used for Qwik), just melee; and I wanted these figures to matchup with my old Waiteri tribe.
Email ThisBlogThis!Share to TwitterShare to FacebookShare to Pinterest