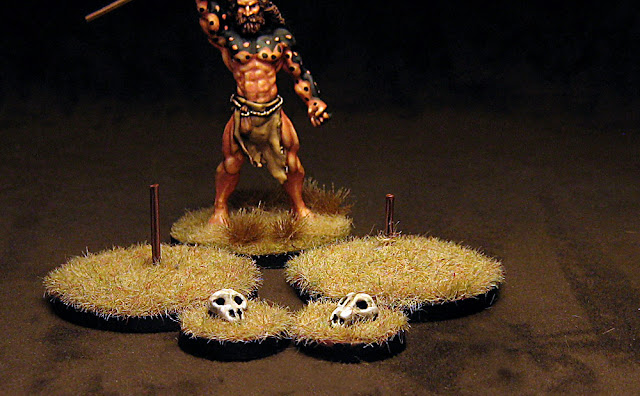 Nothing major here; While I waited for the primer to settle on the figures, I threw together a couple dog skulls (called "beans" in the game) and a couple stakes on which to score.

The stakes are made simply from brass rod driven into poker chip bases (to add some consistency with the rest of the figures.) The dog skulls are made from greenstuff. I mounted them on small 20mm bases, that way, I can drop the small base onto the larger base of the figure carrying the skull. I only needed one skull, but I had pulled a little more greenstuff out than I needed in one go. That, and it doesn't hurt to have an extra. I even had enough leftover to make a third (somewhat smaller) skull which I used to add some decoration to my freelance driver.

The glue under the static grass in these photos hasn't quite dried. When it does, I will add a tuft or two to the stake bases (the same tufts you can see on the figure in the background.)

With the primer dry, and the stakes, beans, field and some terrain finished, all that is left to do is paint the players!
Email ThisBlogThis!Share to TwitterShare to FacebookShare to Pinterest