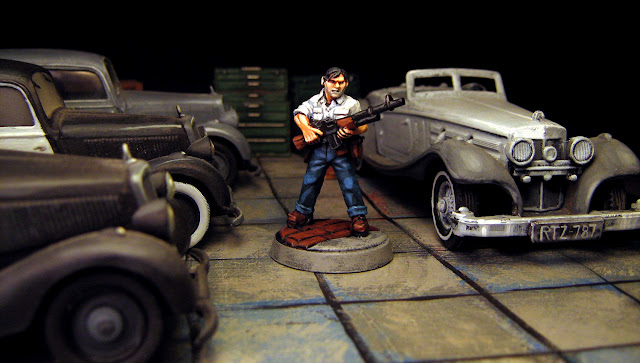 A couple more figures. The "mechanic" is actually one of the figures from the Dinosaur Hunters pack, from Copplestone's High Adventure range. I through him into denims, gave him a five o'clock shadow and decided that's all I needed to do to be able to call him a mechanic. And with his BAR, he's making sure someone isn't gonna line him and his crew up against the wall of a Chicago garage.

The other fellow will be one of my mob bosses. His white togs were difficult. The white turned out all right, but I'm still having difficulty making it look smooth. I think part of it is my lack of skill, and part of it is that the white I have (Foundry) is a little thin. I may have to learn to glaze with white to see if that helps. Still, the figure turned out nice, and he'll fit just fine with the rest of the group.

Photography
I've been asked a couple times recently about how I do my photos. So I figured I throw this together real quick to show. I figure a picture is better than words to explain how I go about it all. The only note I didn't put in this pick is that the drop cloth is one continuous piece (rather than a "ground" piece and a "wall" piece.) Also, the front light is an incandescent bulb, and the top light is a CFL (compact flourescent;) I set the camera's white balance on automatic, and later make small color corrections on Photoshop. 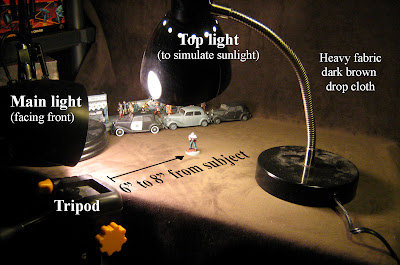