On to the next project! 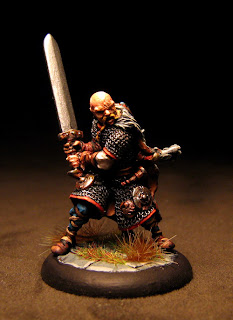 This figure is from defunct Rackham's Confrontation line. I don't have the package in in front of me, but I think he's a mercenary officer from the Dogs of War line. I've had him for a few years and only this week started painting him while taking short breaks from the Street Corner project.

I've decided that since 4th Edition D&D only has a couple extra character classes in the core rules (i.e., the first player's handbook), I might as well do them, too. So here's the Warlord class. This is a vanilla figure;l I didn't do any conversion work on him (except gave him an old stone floor base.)
He's missing an eye and has some scarring on it, but the sculpting is so delicate, I wasn't able to do it justice. Oh well. Maybe a few years down the road, this will be a figure I strip and repaint.

I still need a druid, warlock and a bard (and maybe a new monk) to complete the set. I have a sorcerer waiting to be primed.