Each wheeled infernal was treated as a religious relic, a gift from the Oppenheimer's saintly Friends. The priests knew these were gifts because most of the vehicles were embossed with the name of its giver. And many givers went further by giving a name to their gift. So all vehicles are named by the inscriptions fixed to them, such as Saint Plymouth's Fury, (or with variants of the names, such as The Sting of Saint Hudson.

When the infernals started rolling into Oak Street Church's storage, the diverse nature of the models of vehicles amazed the priests, and having a culture that mixes religious with empirical thinking, they wished to further classify the vehicles. But  they weren't quite sure how to the taxonomy. The vehicles all had four wheels; they were all made of mostly metal; they all had the infernal engine. But every vehicle in the church had different lines, contours and dimensions, with only one or two being at least noticeably similar (usually those of the same saint).

The break for church came with the advent of the Machinas races. Instead of classifying the vehicles based on shape or size, the High Priest Brother Eon (who was also the founder of the Oak Street Church Garage) proposed classifying the vehicles based on armament. The Council of Brothers approved, and the system has been used ever since. Here are a few of the main classes of vehicles used in the Machinas: 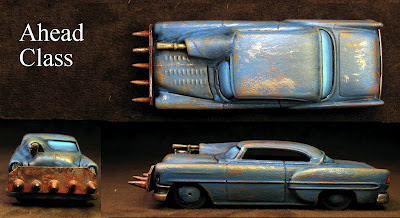 The Aheads are so named because all of their weaponry are focused ahead. Some of the weapons might have some rotational ability, but they are limited to no more than 30 degree from the centerline of the vehicle. The Aheads are the most common class seen in the Machinas. There are also a few subclasses of the Ahead, the most common being the Heavy Ahead. 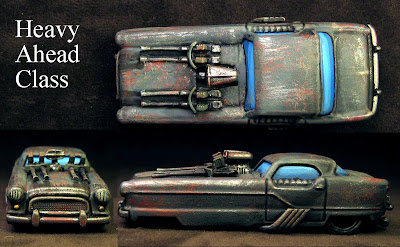 The Heavy Aheads are the same as the main Ahead class except that the weapons are either of a very large caliber or are able to deliver a blistering rate of firepower. The forward weapons are usually a Heavy Ahead's only weaponry, since the vehicle is otherwise trying to save weight  to make space for the weapons or the huge amount of ammunition. 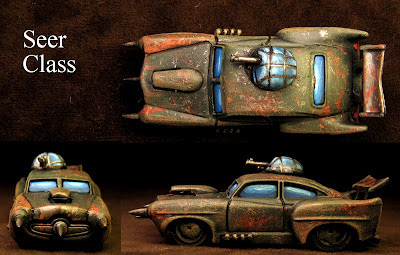 The Seers are those vehicles whose main weapon is turret-mounted, or otherwise able to rotate to cover at least 3/4 of the area around the vehicle. They are called Seers because the weapon is able to "see" all around. The weapon can either be a gun, cannon or missile. So long as the weapon is able to rotate more than 270 degrees, the class of vehicle is Seer. A few rare vehicles are turret-mounted with a heavy cannon or missile salvo; these vehicles for the small subclass called the Thunder Seers. These are among the crowd favorites, vehicle mounted with weaponry that is slow to load and rarely strikes its mark, but that fills the air with the sound of thunder (The sound of thunder is a blessing among the Septimontiums; they say thunder is the echo of when the Oppenheimer brought light to the world.)
The vehicles include those armed mostly with missiles, rockets, sometimes large mortars, cannon. 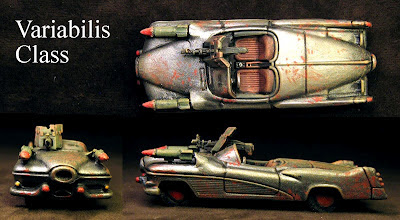 These are the multirole vehicles. They have a mix of weaponry that always include one or two guns (either forward-firing or turreted) and either a small cannon or a pair of missiles or rockets.
Email ThisBlogThis!Share to TwitterShare to FacebookShare to Pinterest