Around the Metae: Charioteer! 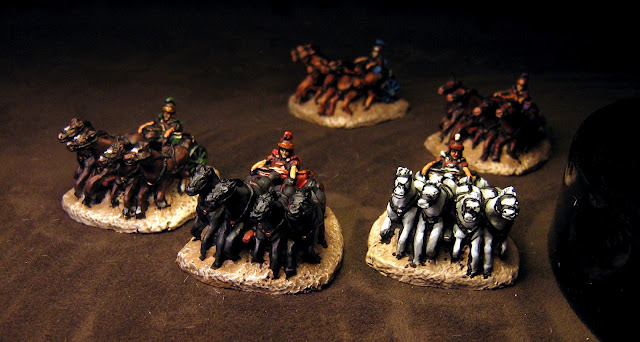 I stayed up late last night finishing the rest of my chariots. I think these will make my games of Charioteer even more exciting. I have each of the four color factions represented plus purple (which I read was actually a faction, along with the Golds, for a short time during the time of Emperor Domition; So my colors are all good.)

My track here is made from a scrap of VFF suede (the same stuff I use for my Red Sand Black Moon arenas.) Along one side I have a painted wall marked with sections of race track to determine race progress using a glass bead (read below). I also have on my track Roman numerals to keep track of laps. 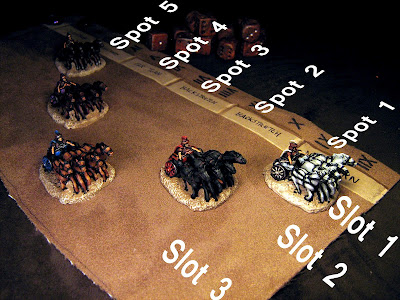 Charioteer: The game Charioteer is fun, but it's different than your average racing game. For one, you don't actually race your models over a model or map of the entire circus. The area where you place your chariot miniatures/counters is of one section of the race track upon which your chariots jostle for position within the pack. A marker is moved along a small diagram of the track, indicating where on the track the pack of chariots is currently racing (either on the straightaways or on the turns.)

The pack mechanic is also advantageous because it requires very little table space (my track is 4" x 12" using 15mm chariots.) And since the footprint is small, you can use much larger chariot models. A dining room table should easily accommodate Games Workshop or any other 28mm chariots, for example.

This section of track is divided into Slots and Spots. Think of Slots as lanes across the track, and spots as racing positions (first, second, third etc.) A basic game will have three slots and as many spots as you have chariots (so games can be as large and unwieldy as you want them ;) I like this pack mechanic because it doesn't allow a player to take a huge lead, or let a player drop back too far out of contention; Everyone is in the race ... until folks start crashing.

There are only three stats, Savvy, Strength and Speed. Savvy and Strength are stats held by the driver, while speed is the stat of your horses (so drivers and horse teams can be mixed and matched in a campaign game. There is also an auction mechanic that can be introduced in which players, between races, can play as owners vying for ownership of the best teams or drivers.)

Savvy represents your general knowledge of racing and is used to determine your success in passing other chariots (or in trying to cause them to crash!)

Strength is needed if you prefer to make passing attempts in the turns, or to whip your opponents, or to gain control of your chariot if it's in danger of crashing.

You roll dice based on your stats and cross reference a few tables (there are only four short tables -- we're not talking huge Avalon Hill lakes of numbers.) There is a lot of dice rolling, and, for the most part, the chariots are balanced for the course of the race (unless you decide to race with more or less total stat points for handicapping etc.) But there are also (a limited pool) bonus dice for each player, which represent stamina and/or momentum. The player can choose when to use these dice during the race to gain advantage.

That's the gist of it all. It's a light game (light, but not beer-and-pretzels) and it's quite fun. You can race as few or as many laps as you want. To some, it feels like it's just dice rolling, but there is definite strategy, especially in regards to bonus dice (and when you blow the wad to make that final pass.) I also enjoy it because you can play it solo against non-player chariots.