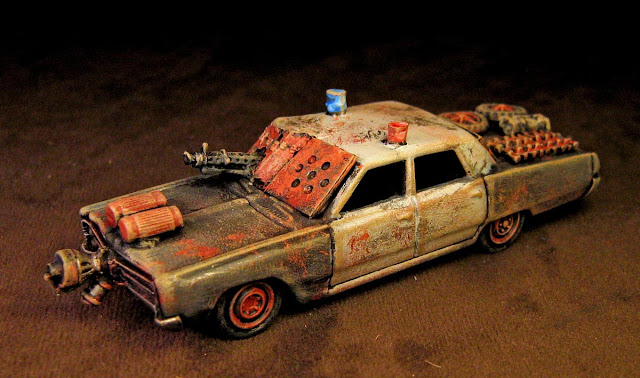 I guess even if I post two cars at once, there's no slowing down, so don't forget to check the last few posts to make sure you haven't missed anything.

The first car here is a Plymouth Fury II. I probably wouldn't have picked this car up had I been thinking at the time and realized all the other cars were 40s and 50s; this one seems just a little out of place style-wise, but it's no less post-apocalyptic. But it turned out a little less Color-gothic post apoc and a little more traditional Road Warrior post apoc.

Yep- that's a flamethrower on the front; Any car with the name "Fury" has to have a flamethrower.
Another thing I noticed is that this car (though the wrong year and model) reminds me of the Bluesmobile. Hmm, I wonder if Hot Wheels makes a 1974 Dodge Monaco? The other car it reminds me of is the Deathmobile from Animal House (that one being a 66 Lincoln Continental ... modified just a touch, of course.) I wouldn't mind adding one or both cars to my collection. Especially the Bluesmobile, with a big megaphone on the roof, so I can randomly yell, "You two girls!" 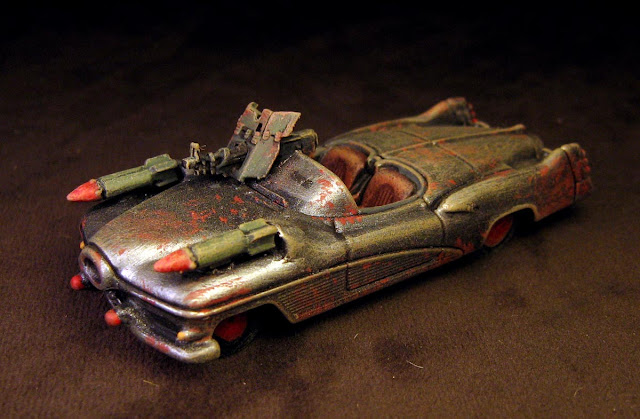 The other car here is a Buick Le Sabre concept car (hence the "Conception" in its name.) It's my favorite of the bunch. The most difficult part of this conversion was adding the blast shields behind the missiles and shaping them to conform to the lines of the car. But they turned out just fine. (I used green stuff. The car is rounded out with a couple rockets from GW orc bommerz, an M-60 from Foundry's Street Violence range, and a gun shield from Flames of War/Battlefront.
It's hard to see in my photo, but the whole car has been painted silver.
I have just two more cars sitting on the table. Should I buy more? I'm thinking at least one more; I have 11 cars, and 12 would be a nice round number.
Email ThisBlogThis!Share to TwitterShare to FacebookShare to Pinterest