"Machinas?"
Yep, it will all be explained later. I've worked out a narrative to tie in this current project into my post-apocalyptic Septimontium universe (Personally, I think the tie-in is pretty cool -- for one thing, all the drivers are nameless priests who are all referred to simply as "Brother Pilot.") But explanations all in good time. 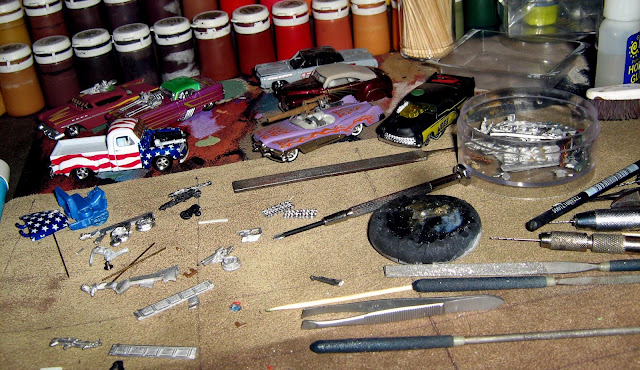 Here is the first batch of my cars (in the pic below), all converted and primed (the second batch still has wet primer.) These didn't get converted as fast as you might think. Sure, I bought these only Sunday, but since then, I've spent all of my time working on these cars. The only other things I've been doing is sleeping, eating, going to work, and going to the bathroom. No TV time (except as background noise), no reading, and no computer time (except for a little research and inspiration-searching for this project.) 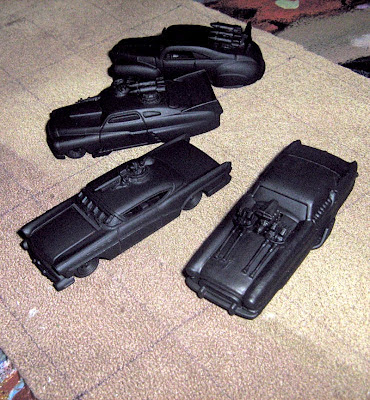 It was tough to figure out what to do with these cars. There was a lot of trial and error. A lot of test- and dry-fitting a variety of parts in countless combinations. I didn't start hitting on some ideas until I started throwing the green stuff around a little more liberally. Then the plasticard came out, and I was off.

I ended up having all the bits I needed; I didn't have to order anything (which would have sucked- I hate waiting, and I'm totally into doing this project right now.) I raided my humble collection of Flames of War stuff (never put together; I got it all in trade for my old 28mm Old West figures) as well as my War Rocket stuff (I only repurposed some torpedoes into missiles.)

Plasticard formed a few extra armor plates, and green stuff helped make gun blisters, turrets, missile blast shields. and spikes. I tried not to go TOO over-the-top. Though it's a post-apoc setting, I wanted to tone down the swaths of armor plating, rusty fenders and survival stowage, and focus more on the gothic(??) aspect of the cars' designs. Sure, these cars will get a healthy coating of rust, but they will have (I PLAN to have) a good covering of color. They won't be pearlescent or glossy with flames and skulls, but they'll certainly have some color.
Email ThisBlogThis!Share to TwitterShare to FacebookShare to Pinterest