Machinas: Up next in a few days

I ordered a few more vehicles and picked one up at Walmart while I was doing other shopping. The Hudson Hornet (above) is the car I picked up today. I think I will put a hatch over the driver side roof, a fixed mount machine gun on the passenger side roof, and a ram with spikes on the front (I had some extra spikes left over.) Not sure what color I'll go with this one yet, but I'm thinking another two-tone vehicle would be nice.

The other vehicles I ordered online. I was spending time on the Hot Wheels wiki page looking for appropriate 1950s-style cars I could add to my collection. That's where I discovered both the 53 Cadillac custom (looks like a retro-retro el Camino.) That's a tiny plastic gravity cart in the back of the Caddy (fixed, not a separate vehicle.) I don't have the tools (Dremel) to break the rivet heads to take apart the cars, so I'll leave the cart int he back of the Caddy, and perhaps incorporate it into the base of a weapons mount (though, I'm not quite sure what I'll do with the Caddy yet.) 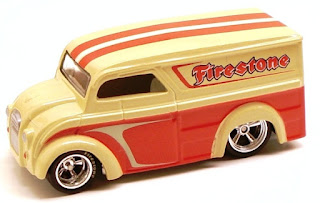 The other car is simply called "Evil Twin," which is also based on a 50s Cadillac model. I'm keeping the engines and probably going to mount some sort of heavy machine gun between them, though, that sloping back end is just asking for some rockets - if I had any left. (I'm almost out of scale weapons, so I'm gonna have to start making my own.)

And to make shipping reasonable with this order, I threw in one more vehicle; I wanted something a little different, so I sought out a van and found this nice little Dairy Delivery van which sticks to my 1950s preferred style. I'm thinking of doing armored plate across the front window, with a ball-mounted machine gun cut into the armor. I don't want to mount anything on top of the van since it is already a taller vehicle (I'm trying to plan out storage options, so I'm trying to keep the vehicles close in size.)

That should be it for the post-apoc cars for a while. I actually only needed 5 or 6 vehicles to play my converted "Charioteer" game, but I like to give my players options. And maybe one day, we'll do a grand  battle race with all 13 vehicles.
Email ThisBlogThis!Share to TwitterShare to FacebookShare to Pinterest