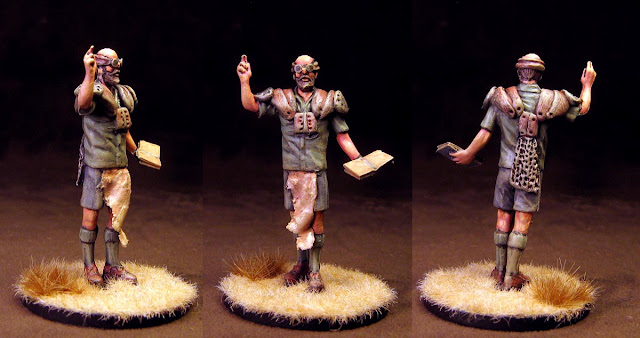 Here's the last of my post-apoc stuff for a few days (I do have one item on the way.) The first is another priest, a low-level Oak Street missionary. He was made from another Marx figure. He completes my collection  of "clergy." I'd still like to get a figure to represent a "gene" priest (the last branch of the Septimontium church which I don't have represented.) In due time.

The other figure was actually an impulse buy. I had yet to try out a figure from Reaper's new Bones collection, and my local game store had a couple. So I picked up the purple worm (only $2.95!) 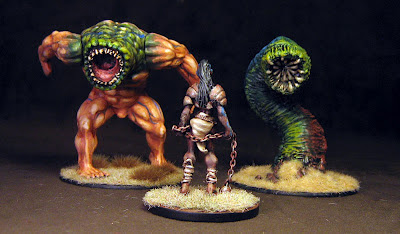 It's made up of essentially the same material as my dinosaurs, so I used the same technique as on my dinosaurs to paint this worm. The material remains tacky with a spray primer, but takes and holds an acrylic base coat just fine.

I'm calling this beasty a Tadpole. I'm letting the figure dictate a little bit of my setting (in this case, biology.) I'm calling it a Tadpole, because it is the young of a Froggy. As it ages, it will lose its digging teeth and grow limbs, at which time it will emerge from underground to live the rest of its life hunting angrily around the Wasteland.