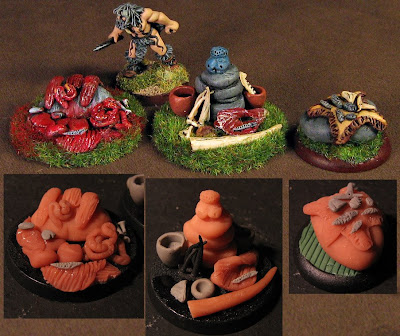 Here are, from left, a base of meat and organs (gloss varnished to make the meat look "fresher"), an idol on a stack of rocks surrounded by tribute (including a fire"lantern," meat, bone etc), and a selection of tools resting on an animal hide upon a rock.
Everything except the bases themselves was made from either Super Sculpey (which appears pink in the unpainted photos) or Super Sculpey Firm (which appears gray.)
Despite the batch being a little bit old, and somewhat flakey and dry, the Super Sculpey Firm is excellent for work in a tiny scale. The tools, as small as they are, were not difficult at all to create. They were a tad bit fiddly, but they took the details nicely. The lines inscribed in the meat and impressed into the tools was made by a needle.
The tools are really only inspired by actual tools; this collection was for practice. I have some reference material from which to recreate actual knives, scrapers and points in 28mm using the Sculpey. That'll all come later once my eyes become uncrossed!
Note: The figure is a Copplestone caveman (to give scale.) The bases of the meat and idol are 40mm, and the base with the tools is a 30mm display base.
No comments:
Email ThisBlogThis!Share to TwitterShare to FacebookShare to Pinterest 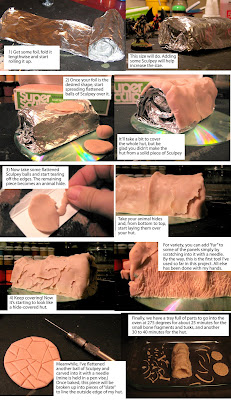 I put the hut on a base, and primed the whole thing black (Testors matte black 1249). I chose three different shades of brown and painted each of the hide panels one of the shades. I also painted some of the furs gray to add variety. The tusks were painted an off white- don't worry too much about coverage; you don't want the tusks to be TOO bright.
A light shade of each brown and gray was roughly drybrushed on the appropriate areas. The tusks were given a lighter highlight of ivory, and the base was flocked. Time from painting to end of flocking: About an hour and a half. So, from start to finish, this prehistorc hut took three hours to make. Now my cavemen have a place to hide when smilodons are about.

A couple projects I've had in mind are now fully possible: One would be a burial scene (to serve as an objective marker?) involving a dead cro magnon wrapped in hides laid in a shallow bit lined with more hides, stones, bones and idols. I can remember seeing a lifesize diorama of a prehistoric burial scene at the Museum of Natural History in Washington, D.C., and I'd like to recreate this.
The other project I want to do is to take either a toy Mammoth with which to modify, or start entirely from scratch to make a dead/recently killed mammoth. Some of his skin would be peeled back revealing a rib cage and organs as if a tribe had just begun to harvest their kill. This second project is still a little ambitious, but by the time I get to it, i may have the skill enough to simply sculpt it entirely from scratch. Since it will be lying down, an armature would not be required; the construction would be very similar to the prehistoric hut shown here.
1 comment:
Email ThisBlogThis!Share to TwitterShare to FacebookShare to Pinterest 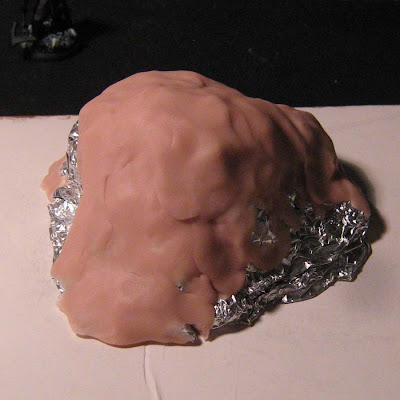 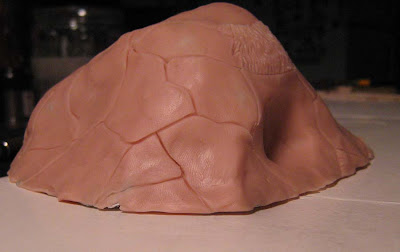 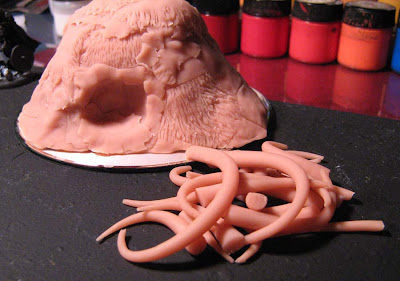 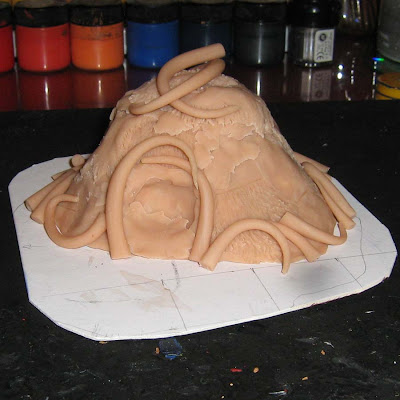 No pics, but just a quick update: I'm on vacation and my Dad (a fine modeler himself) has introduced me to Super Sculpey. I was actually fully aware of this polymer clay before, I just never had the gumption to spend money to try it out myself. Well, Dad had some, and I gave it a whirl.

Super Sculpey is a polymer clay that, once you have finished your sculpture, can be baked in a regular oven to harden the clay. The result, in my opinion, is close to a resin finish. There are two Sculpeys out there, Sculpey and Super Sculpey. As far as I can tell, the Super is chip and shatter resistant. Keep in mind, resistant does not mean indestructible. The thicker pieces I made are strong, but the smaller pieces (such as thin bases) will snap if you apply enough pressure.

But, holy cow, the possibilities. Imagine working with green stuff, except your sculpt doesn't pick up your fingerprints, and doesn't dry until you bake it allowing to you to work and rework your sculpt at your convenience through the week.

It does have it's drawbacks: Since you have to bake it, that precludes you from using it to fill gaps or add parts to metal miniatures. Also, it's difficult if not impossible to sculpt hard edges while it's soft, BUT it can be polished, sanded and filed once it has hardened after baking, so hard edges are achieveable.

I say go buy a block. A 1-pound block will cost between $10-$14 (cost varying with region.) But places like Michael's and Hobby Lobby always have 40 percent off coupons.

If you try it and don't like it, give it to the kids and let them have fun, it's (advertised as) non-toxic (though the box says to be careful of the fumes when baking.)
No comments:
Email ThisBlogThis!Share to TwitterShare to FacebookShare to Pinterest
Newer Posts Older Posts Home
Subscribe to: Posts (Atom)