Zombicide: Some survivors and some storage

Here are the first of the survivors from my acquisition of Season 1. They were pretty straight forward to paint. I also ordered some Battlefoam. It won't be nearly enough to hold all of my zombies, but it'll be plenty to hold my survivors from the previous two seasons and probably the third season.

For priming, I'm using Testors Flat Black (1249,) and it must have been formulated specifically for the kind of plastic used for Zombicide: It's about the most durable combination I've experienced. I gave it the old "finger nail" scratch test, and that primer just won't come off!

OK, it will come off, but it takes some serious scratching, much more than will be encountered on the casual game board. This is just the Flat Black I'm using as primer; the paint is not AS durable, but it's still much better than anything else I have on the shelf. I kind of wish all my figures were molded in this type of plastic now.

So what does this mean? Well, I'm still going to drop my survivors into the Battlefoam for added (and pretty much redundant) protection, but the zombies get to be dropped straight into an extra box! No more searching for expensive options to house 300 zombies. The primer and paint will hold, and if it doesn't, well, these are a breeze to paint. I'm good to go.
8 comments:
Email ThisBlogThis!Share to TwitterShare to FacebookShare to Pinterest

Here  are all my zombies painted with a simplified monochromatic technique (mostly just drybrushing the three or four colors.) Simplifying the process allowed me to paint all of these figures in a total of about six hours.

I guess I should add an asterisk: I still have to paint the zombies I just recently acquired from Jeff. These that are painted represent at least those from my original collection. All of Jeff's are standard (gray) zombies; They'll get painted for sure, eventually.

Yes, I'll play some Zombicide with these figures, but it's also nice to know that I have a good reserve of zombies should I want to play any other zombie game (of the skirmish variety.)

8 comments:
Email ThisBlogThis!Share to TwitterShare to FacebookShare to Pinterest 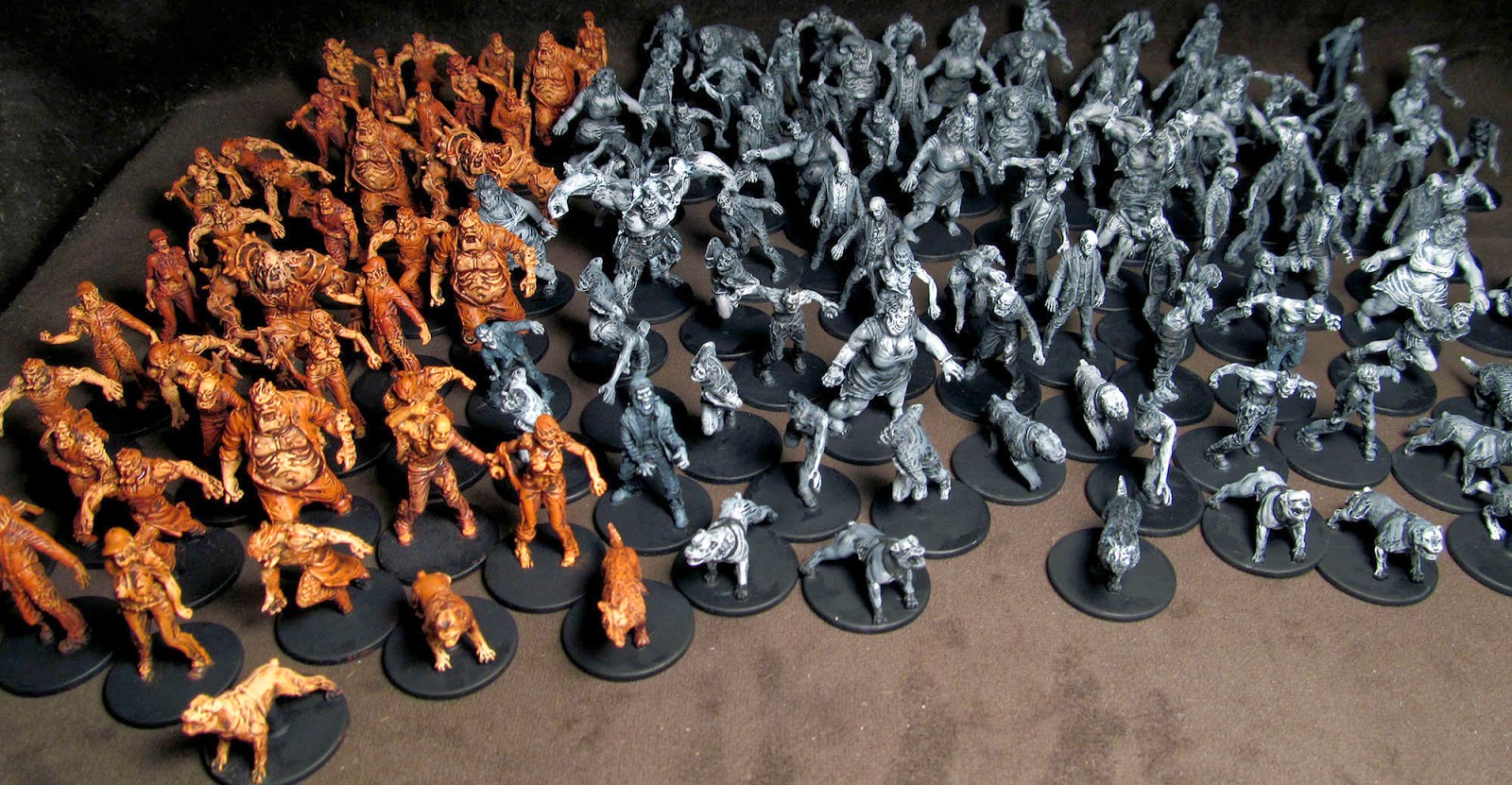 I finished the rest of my normal zombies, picked up some more from my friend Jeff, primed my toxic zombies and finished all of my berserkers. The picture above represents about 4 hours painting total. I'm thinking the toxic zombies, once primed, will take another two hours. The process is easy- just a couple layers of drybrushing, and a couple layers of lightening up the skin.

I'm holding off for now on painting the new zombies I picked up today from Jeff. Since I have a glut of them, I may use the new bunch for a few conversions; I may do something as simple as take a few apart so I can have crawling torsos and shambling legs if only to darken the landscape a little more. Or I may just pant them up so that everything is done (and I can get ready for samurai.)

And yes, those are some dogs painted in berserker colors.
2 comments:
Email ThisBlogThis!Share to TwitterShare to FacebookShare to Pinterest 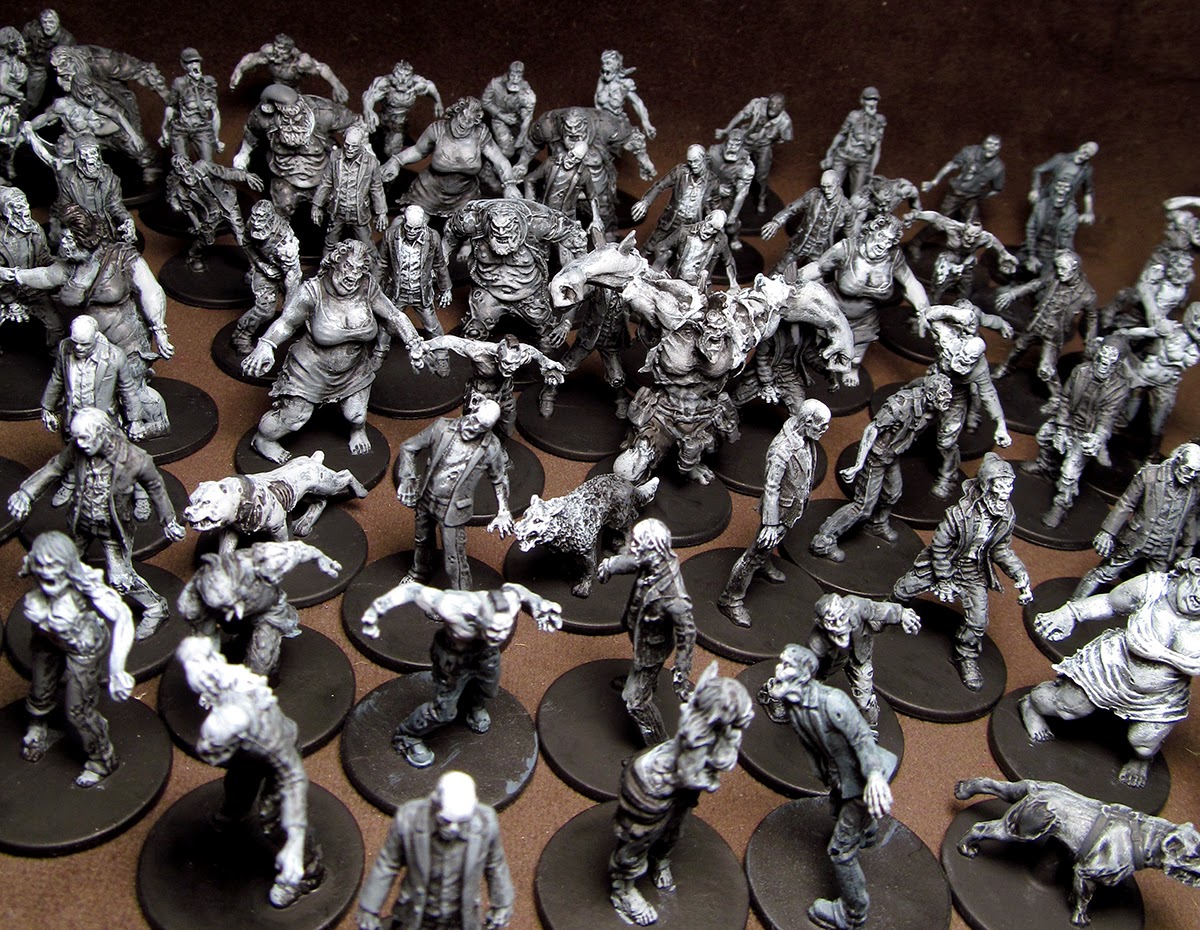 While I await some brand-spanking new samurai, I've returned to painting some of my Zombicide zombies. I painted my latest bunch (30-40 figures) in about two hours. I simplified my process to three greys and white for white clothing, which helped keep the painting time down. I have some runners, dogs and fatties yet to do for the standard zombies. (Though, I'm also buying a copy of the Season 1 box, so I'll have all the standard zombies I'll ever need.)

I'm hoping to get all my zombies painted before the next Kickstarter (or at least the standard zombies done before the new samurai arrive). I also still have plenty of zombivors to paint.
3 comments:
Email ThisBlogThis!Share to TwitterShare to FacebookShare to Pinterest 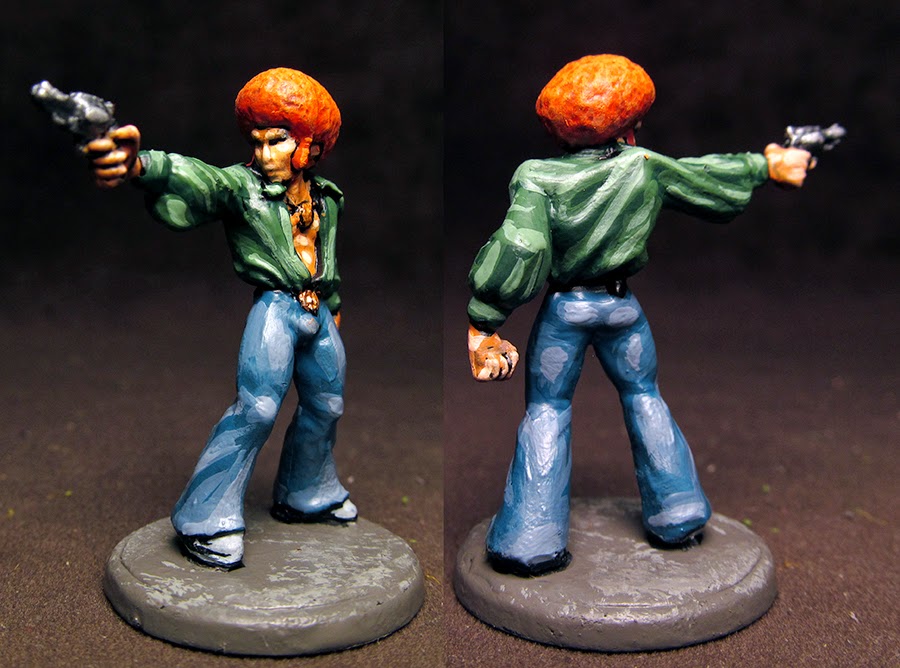 I had been looking for a copy of this (Reaper Bones) figure since I painted one for Jeff; I wanted my own to use when playing Zombicide.

The figure doesn't have a lot of detail, so he was easy and fun to paint. Instead of the cliche Afro-American pimp, I decided to go in a slightly different direction with the palette. I still gave him a pimp name, though:
Ginger Snap.

He'll also be nice to use in Zed or Alive (hint, hint)

He's based on a Proxie Models 25mm round, which I've filled in with a little bit of green stuff.
1 comment:
Email ThisBlogThis!Share to TwitterShare to FacebookShare to Pinterest

My friends the Rust Devils have began their Kickstarter campaign for a zombie skirmish game (using the lovely Savage Worlds Showdown rules.) So head over and check out their Zed or Alive Kickstarter!

And how do I know the Rust Devils? They took my Mutie Beauty concept and made it awesome.

I usually don't go this long without a post, so for your enjoyment, here are a few random photos from my collection: 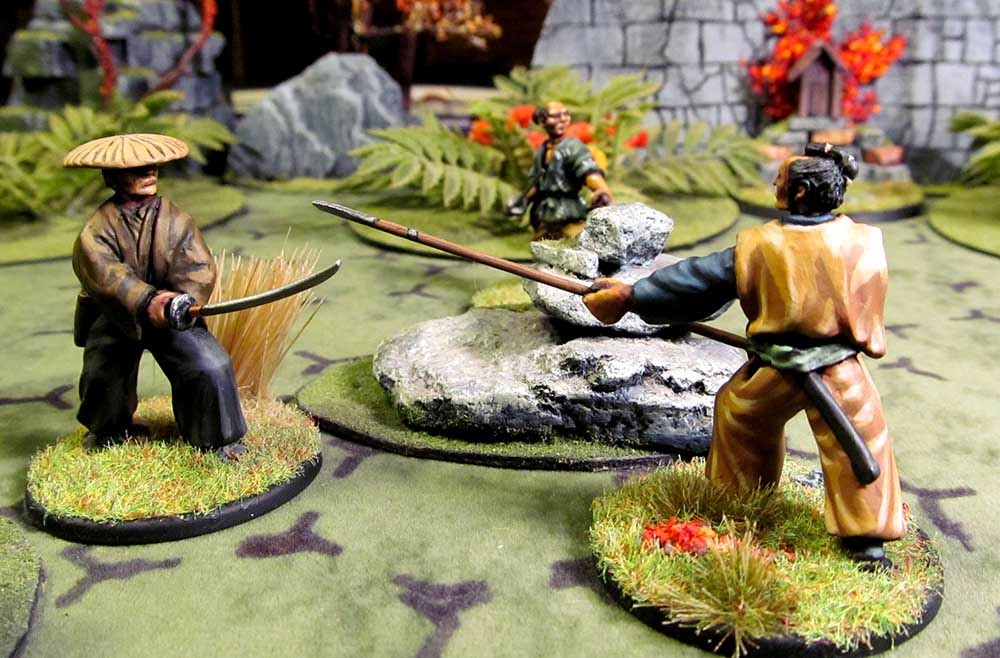 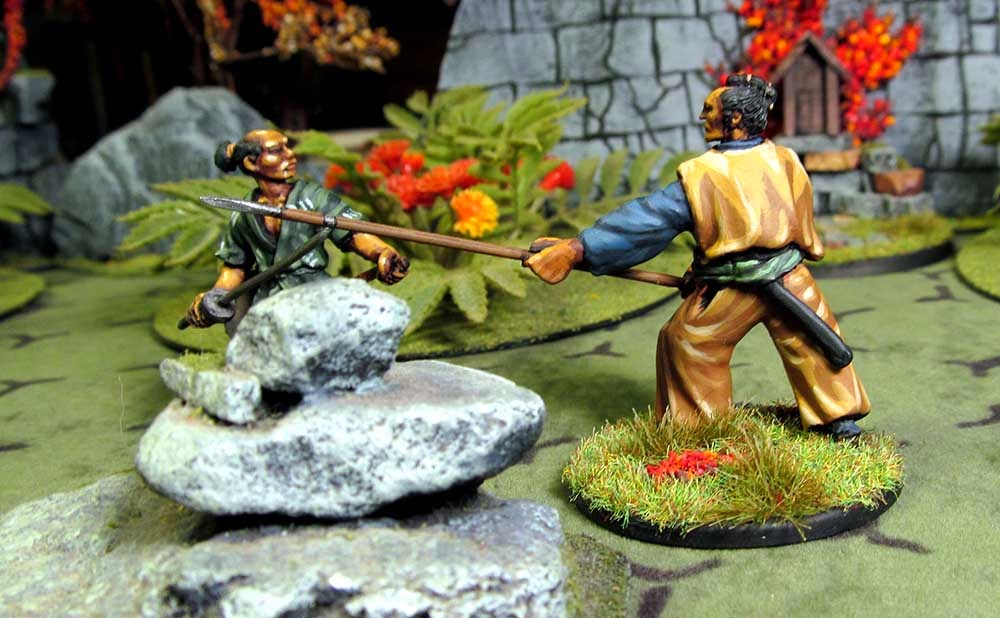 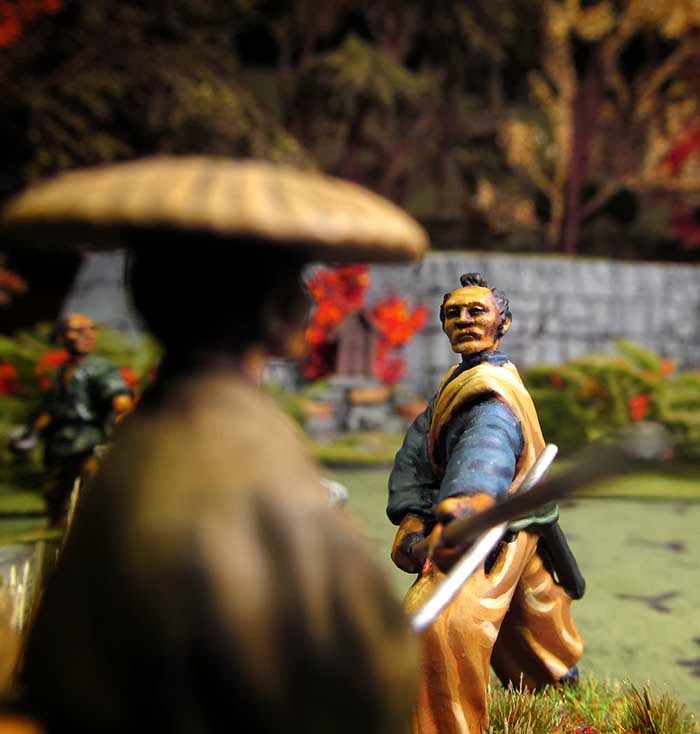 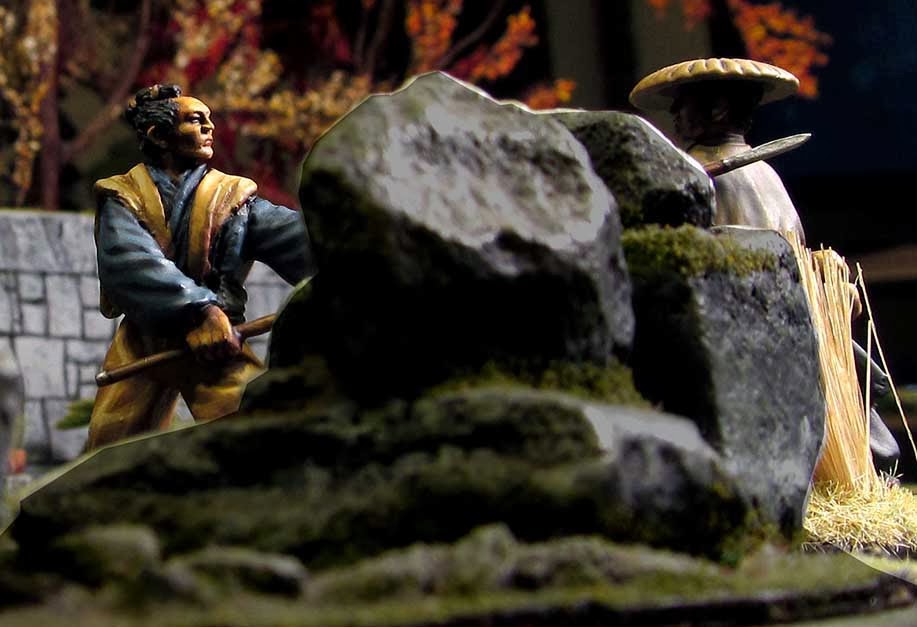 Why I prefer 42mm

40-42mm seems to be a traditional toy soldier scale, but has been overwhelmingly overtaken by 28mm, which takes up less of a footprint in large battle games. Lately, skirmish games have made somewhat of a resurgence. Even still, 28mm (and the more "heroic" 33-35mm) figures are here to stay and will probably remain popular for years to come. So why do I prefer 42mm? 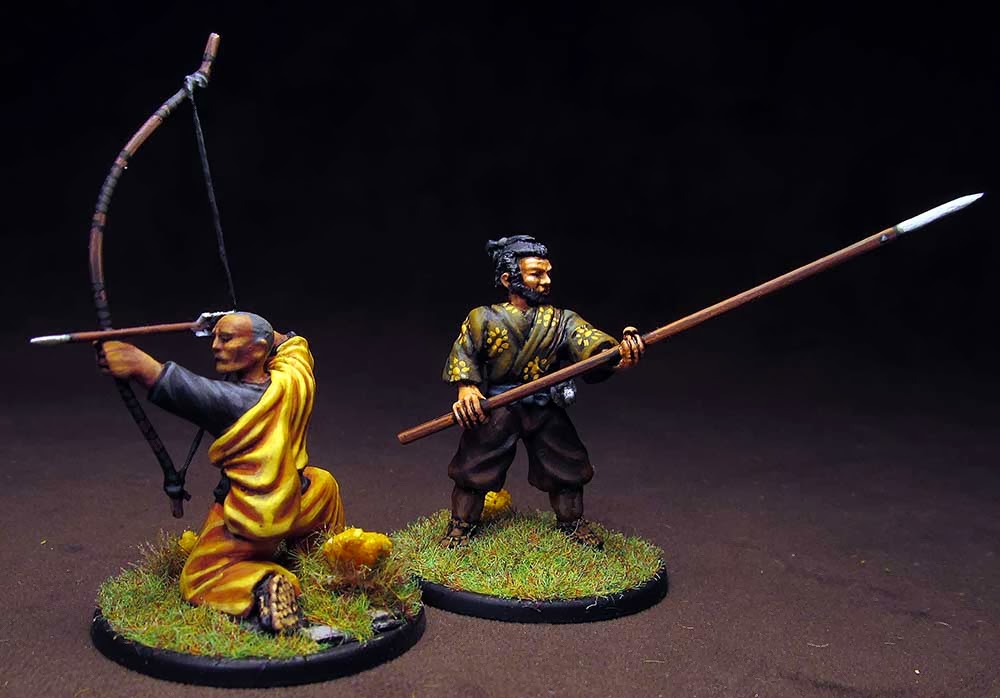 Mostly because they're just damn pretty. When I started this hobby, I did it to paint. The game was Warhammer (of course,) and my friends and I played many games. But we spent more hours painting than we did playing. And, in any case, I'm an artist first (I have a bachelor's degree in medical/scientific illustration,) so I'm going to always prefer the art side of the game. So the painter took over, and the gamer took a break.

Miniatures companies produce some beautiful 28mm figures, many of which I still paint, but I prefer a larger canvas, and 42mm figures provide that. Being easier to paint adds to a more relaxing experience. The larger size also allows me to try out some sculpting conversions, and scenic base ideas that would have otherwise been too fiddly or difficult at a smaller scale. I've improved, and I've ported over some of those conversion skills to my 28mm stuff, but it might never have happened if I hadn't tried it out on my 42mm (and 54mm) figures first. 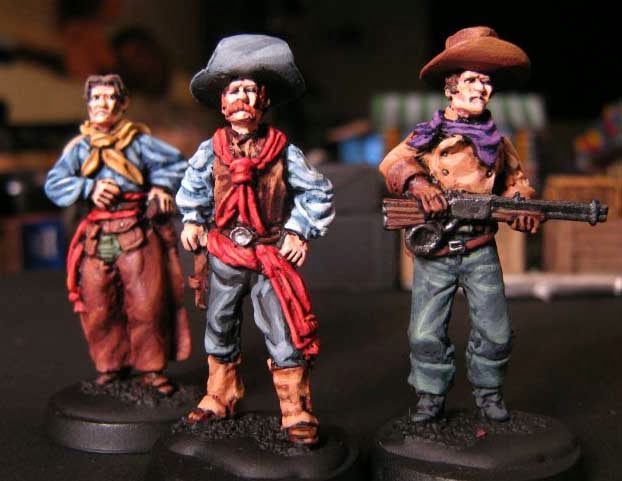 My friends aren't the biggest fans of minis game (they prefer the board variety,) but after discovering Two Hour Wargames (and an excellent solo game in the "Red Sands" series,) the samurai are great to play skirmish games with. And when they are on the table with large trees and rocks and other terrain, they are -- just like I said -- just damn pretty!

How about some Pros and Cons for 40-42mm figures

Pros
-- Easy to paint
-- Easy to convert
-- Look gorgeous on the table (especially at conventions if you're trying to woo new players)
-- Larger scale does not come with a larger price; some 42s cost just as much per figure as 28s.
-- A good selection of figures across time periods (Ancients, Samurai, Medieval, Vikings, European wars, Pirates, AWI, Civil War, Old West, Moderns come to mind right away)
-- Great for skirmish games

Cons
-- Need extra space for large battles
-- Few players use 40mm for mainstream games/Difficult to find opponents
-- Many periods are represented, but ranges are limited (due to limited popularity)
-- Limited available terrain on the market (especially buildings)

Final word: If you like skirmish games and don't have an extensive collection of 28s yet to play, I recommend you check out what's out there for 40-42mm figures. Or if you have some shelf space, try out a few 42mm figures just to paint for fun. You can use the more relaxing experience as sort of a mental cleanser from painting smaller figures, and a few 42s will look nice (and will be noticeable from a distance) in a living room or library.

(I didn't include 54mm figures, because most are much too expensive to buy enough for a game, though, there are plenty of 54mm plastic figures out there. Bronze Age Miniatures does put out a few that are not too costly. And yes, I do love my 54mm post-apocalypse figures, too.)
4 comments:
Email ThisBlogThis!Share to TwitterShare to FacebookShare to Pinterest
Newer Posts Older Posts Home
Subscribe to: Posts (Atom)