A few more finished survivors from Zombicide Rue Morgue. They are all painting up fast; just three more survivors left to paint up, and then I'll move on to the skinner zombies.

It will be nice to have them all finished before the rest of my Zombicide stuff (Angry Neighbors and a few extras) arrives in a couple months. If that stuff arrives on time, I'll be able to get everything painted and ready to go for my friends' Zombie Jesus Day celebrations (Easter.) We go to a place called Zombie Burger in Des Moines, Iowa, and then we return home to play Zombicide. At least, that's what we've done the past couple years.
6 comments:
Email ThisBlogThis!Share to TwitterShare to FacebookShare to Pinterest 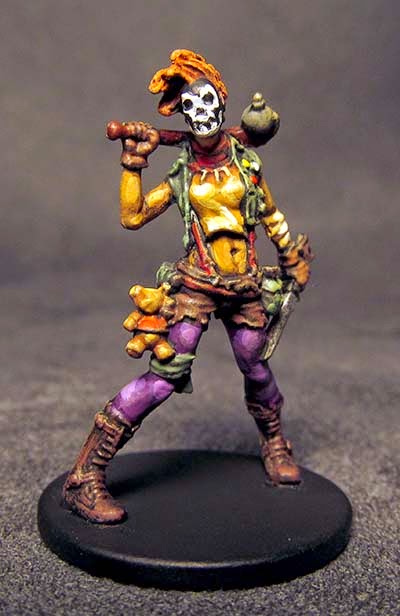 It'll be a while until I get the whole tribe finished (I plan on doing 6 or 7) because a couple of the figures I want to use are in the Angry Neighbors box. But once they're done, it'll be fun to run the tribe through the Badlands (I'll have to houserule some radiation rules and use lots of Toxic zombies.)
4 comments:
Email ThisBlogThis!Share to TwitterShare to FacebookShare to Pinterest

Here are my first survivors from the recent release of Zombicide: Rue Morgue. I think the figures have just been getting better and better with each new season of Zombicide. These have some great detail and were easy to paint. I love the cowgirl figure; she's a tall drink of water. Even without the hat, she's a millimeter or two taller than most of the other figures.

Something new I'm trying to help tone down the colors and unify the survivors is to drybrush all of the figures with a grayish-sand color. This weathers the figure and pulls all of the colors together.

So the gamma on my computer monitor is a little out of whack (this is the setting that controls the intensity/saturation of white/color(?) on the monitor. I was able to readjust it to compensate, but I'm not sure if I've adequately recompensated the toning of my minis photos. If you leave a comment here, could you also mention if these photos were too dark or too light? It'll help me recalibrate everything. Thanks much!

7 comments:
Email ThisBlogThis!Share to TwitterShare to FacebookShare to Pinterest

Here's the last of the heroes from Downwood Tales, Ditty the shrew. I took a little extra time with her since she had a couple details that needed a patient brush (the fiddle and the flower.) 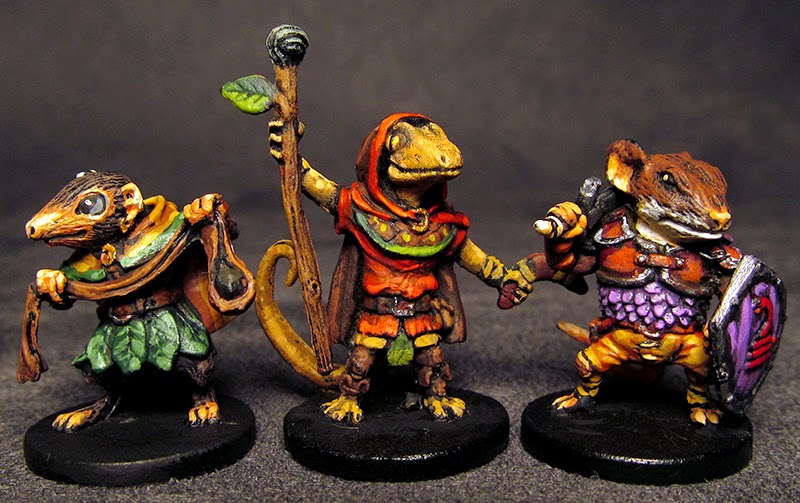 After Christmas, I plan on getting the Heart of Glorm expansion so I can complete the full set of heroes by adding Nere the shaman(?) I've began painting a couple of the bullfroglodytes.

I also return to work tomorrow after a week off, so the painting might slow down a bit. (Though, I seem to be more productive with my painting sometimes when I'm busiest at work; we'll see.)
1 comment:
Email ThisBlogThis!Share to TwitterShare to FacebookShare to Pinterest

Here's another of my 54mm figures. Of all the conversions, this one was my least favorite, but after applying this alien-esque camouflage, her stock has risen, and she will be readily welcomed into the collection.

Just a couple more 54mmm Rogue Planet figures to go. I also have some Mice and Mystics figures in progress, and I'm in the process of priming my new Zombicide figures. As long as I don't get any new Kickstarter boxes in early, I should be set for projects for the next couple months.

I finished another one this evening. I added the tail and the head fin using green stuff. Simple enough.

My early shipment of Zombicide: Rue Morgue arrived today, so I primed up a few volunteer figures and did a quick, monochrome color test. The original plastic has an interesting color; the color -- to me -- looked almost yellow ochre in the KS photos (as well as under certain lights at home,) but are actually a subtle light green (not as neon as the Toxic zombies from Toxic City Mall.)

Instead of fighting with my greens to find a palette that would differ enough from the TCM zombies, I went ahead and chose the more ochre/beige palette. The colors here are actually Foundry's Buff Leather triad with a final highlight of Linen (on the skin.) I like the colors, and they contrast nicely against my other monochromatic zombies.

When the Seeker zombies arrive, I plan on doing them in either purple or blue (probably blue.) They come molded in black, but that would be too close to my gray zombies. I thought about using Foundry's Storm Blue, but that might also stray a little close to the gray palette. As for the skinners, I may try one or two more ideas along the lines of light brown, but I very much like my first choice here.

Mice and Mystics: Downwood Tales
I got a nice start on my Downwood Tales figures, finishing heroes Ansel and Jakobe, and the minion Molox. I kept the colors consistent with the illustrations on the cards and in the book, except for Jakobe. Jakobe is a gecko and is described as having bright green skin, but I chose ochre (must be my ochre week) for his skin, copying the color scheme of a gecko owned by a friend of mine (Jeff, who commissions a bunch of my minis painting.)

I've started a couple other figures, but I imagine my Mice and Mystics figures will be my filler figures (I rarely get to play, so there is no hurry to paint them.) I should be able to get my zombies done in one or two settings, so I may return to the Mice and Mystics before too long. And yes, I still have a few Rogue Planet figures, but that's all -- just three projects.


9 comments:
Email ThisBlogThis!Share to TwitterShare to FacebookShare to Pinterest

A while back, I purchased an extra set of Mice and Mystics miniatures (available direct from Plaid Hat Games.) I only purchased them to get some more minions (so as to try out some conversion work and to make myself a Captain Vurst.)

I've had these extra heroes from that set sitting about, so I went ahead and painted them up in some alternates colors -- colors different than from the game illustrations. These were fun to paint as usual but I have no use for more heroes (I'm sure I COULD find a use), so I'll probably sell these to fund the purchase of the Mice and Mystics: Heart of Glorm expansion.

These were somewhat rushed (the Downwood Tales box shipped quicker than expected,) but they still look great, and will certainly look fine on someone's table.

The urge to paint these was triggered with my purchase of the Downwood Tales expansion; as if I needed yet another distraction from finishing up my Rogue Planet figures. And I will get back to Rogue Planet -- I'll also need to somehow not let the early delivery of Zombicide 3 distract me, because I will certainly be eager to paint some more monochromatic zombies.
1 comment:
Email ThisBlogThis!Share to TwitterShare to FacebookShare to Pinterest

I had meant to paint this figure last, among the Rogue Planet figures, because it's my favorite. But I wanted to test a skin triad on it; I followed up by painting all of the rusty armor. All that was left was the loin cloth and the rocket pack, and, before I knew it, it was done.

I love all the different genres mixed here: Ancient gladiator, post-apocalyptic rust, retro-future rocket pack, modern minigun. I love it all on this figure.

This one was fun to put together and paint. The helmet was something I had actually sculpted myself a couple years ago. I didn't have any use for them (I have two or three) until now. I think it turned out great. All of the rest of the armor is simply green stuff thrown on, pushed around and flattened out. The minigun was made using brass rod carefully driven through disks of cured green stuff.

Oh, and the flesh triad I used on this one (all Vallejo):
Base: 875 Beige Brown
Mid: 876 Brown Sand
1st highlight: 860 Medium Flesh
Final highlight: 955 Flat Flesh
4 comments:
Email ThisBlogThis!Share to TwitterShare to FacebookShare to Pinterest

Here's another Rogue Planet figure. She's carrying the Rocket Explosive Deliverer (also known as RED.) I kept the figure basic because I had to put in a little extra work on the rocket launcher itself, even though RED is just a collection of sections of cured green stuff, cut and fitted together. The handle and shoulder rest was made by first hammering a length of brass rod fairly flat, then bending it to fit. It took me a couple pieces of brass rod to get this part right.

I still have four more Rogue Planet figures to go. I've been painting other stuff, so the energy is there, I just need to focus.
5 comments:
Email ThisBlogThis!Share to TwitterShare to FacebookShare to Pinterest 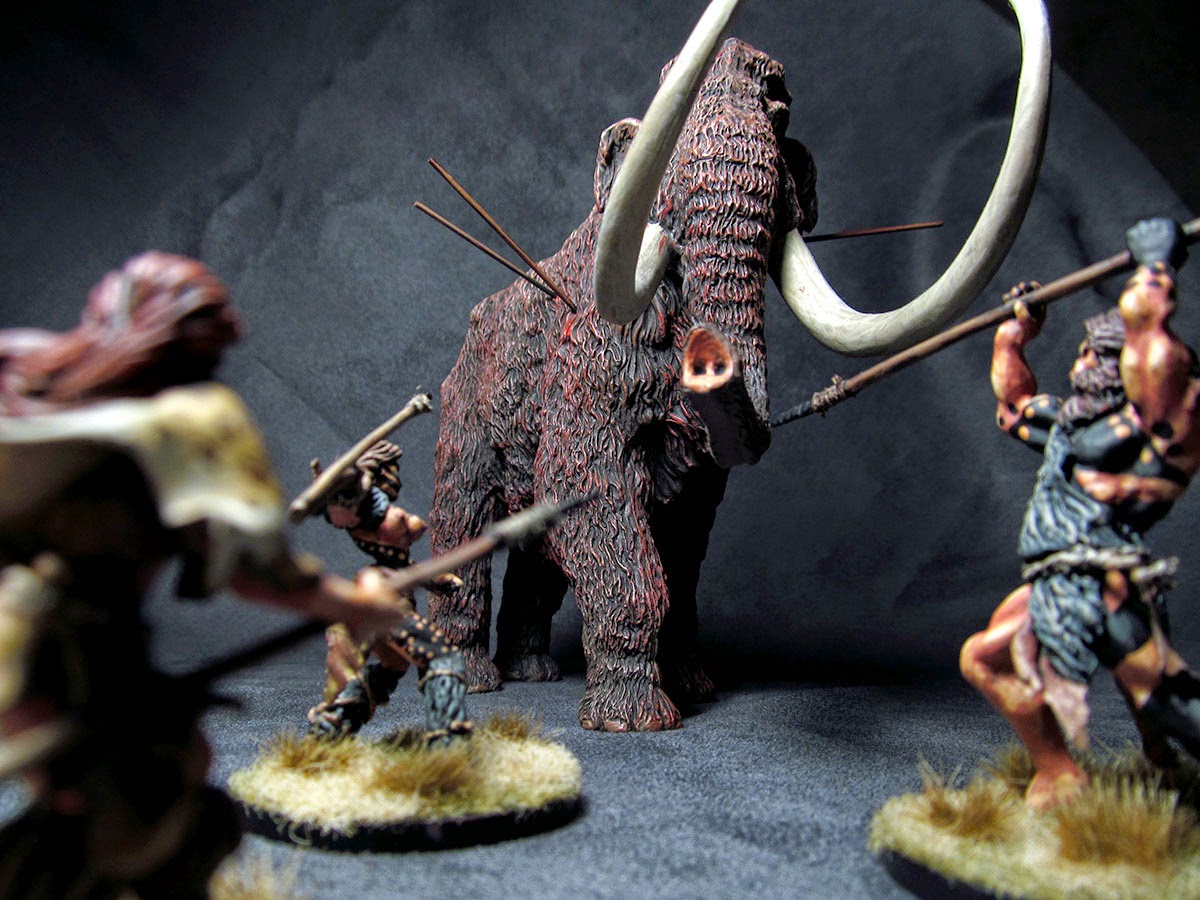 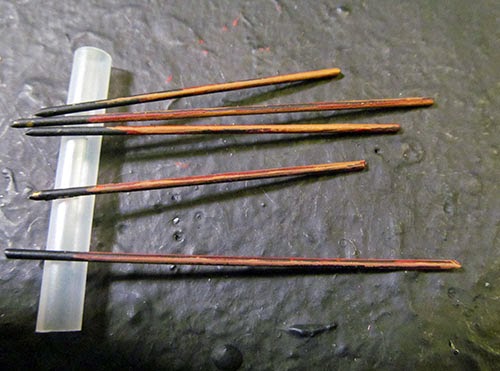 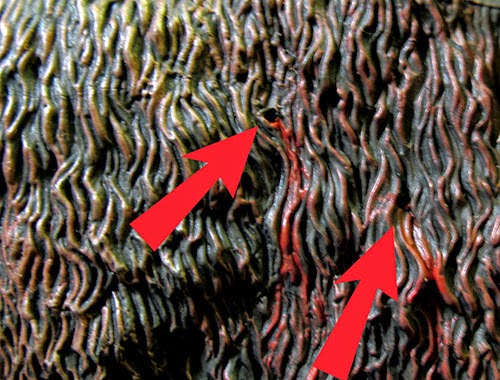 Simple! Now, I need to find some more 54mm/1:32 prehistoric mammals to hunt.
10 comments:
Email ThisBlogThis!Share to TwitterShare to FacebookShare to Pinterest

I decided since I demoted most of my zombivors to zombies, I could promote a zombie to survivor.
"Come at Me, Bro" is the result, a ragged punk armed with nothing but grit and fists.
I also promoted Bones' zombivor to full survivor here. I like his pose; it reminds me a little of "El Mariachi."

Tramping around the internet, I found a Swedish metal band named Sabaton, and they just happened to have a lead singer with a mohawk, and guitarists with long hair. So I figured this pair of figures would be fun to represent the surviving members of that band.

Painting these went well. I may dig out more zombivors over the next few days and paint them up proper. I also still have some Rogue Planet figures I need to finish.
6 comments:
Email ThisBlogThis!Share to TwitterShare to FacebookShare to Pinterest
Newer Posts Older Posts Home
Subscribe to: Posts (Atom)