This is why my new professor figure has a new faceplate on his head; accidents happen when you're trying to tame a sentinel.
Other parts of this conversion include a new control panel (over the tools) on the professor figure, as well as a control unit fitted to the back of the sentinel (made from random bits.)

For fellow space cadet players out there, For house rules, I'm thinking of something along the lines of this: The professor can use each of his actions to give the sentinel an action. But first, he must pass an IQ roll. Each overkill is +1 action. A fail, and the sentinel attacks in his tile (as well as adds the terror effect). Luckily the professor's control has a range of 2.
1 comment:
Email ThisBlogThis!Share to TwitterShare to FacebookShare to Pinterest 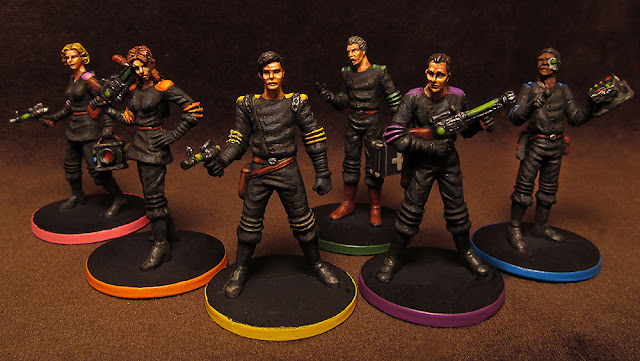 Here is my second set of the Space Cadets Rocketeer crew painted up in my "special operations" scheme. The professor had an accident while I was using a lighter to heat some plastic back to shape (his face melted off,) so I had to find a replacement head. I also gave him a control tablet instead of his tools -- what will he be controlling?
No comments:
Email ThisBlogThis!Share to TwitterShare to FacebookShare to Pinterest

When I pledged for the Space Cadets kickstarter, I added a second set of the plastic figures, so I could have extras and also play with painting. Here is the first of those.
For my second set of Rocketeers, I'm going for a more advanced-looking special operations look. To help identify the character, I'll be painting their color across the top of their shoulders and on the elbow connector rings. (And yes, the click-on base also helps :)

I kept the leather (belt and holster) brown to keep him grounded in his retro setting.

I'm not sure what I'll do with the remainder aliens -- maybe I'll paint them in monochrome as was my original plan? Maybe I'll do them full color but in a different scheme? I have plenty of time to figure that out since I already have enough to play the game. All in good time.

It's been a while, but this is the first figure in months that I've actually enjoyed painting. The past few months, I've gone through the motions to get stuff done, worked out solutions to minor painting problems, and have finished quite a few figures. I didn't hate doing all that painting -- it helped pass the time -- but this was the first figure in a very long while that I truly enjoyed painting. This was also the first in a while that I actually sat down with purpose, used a good brush and took my time (OK, it took me all of an hour to do him, but he was already primed in black, so most of the work was done.)
5 comments:
Email ThisBlogThis!Share to TwitterShare to FacebookShare to Pinterest 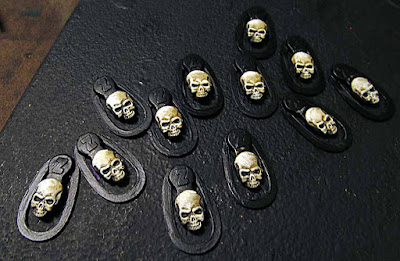 Apologies to the person who painted his first and posted them on Facebook somewhere; I was going to give your name, but I can't find the original post!

Anyway, what a great and fun idea he had to paint the skull markers for Zombicide. They're easy to paint (it took me 20 minutes to paint these 12), and they look good, even if they're only use is to pimp out the game.

I primed with Army Painter. Drybrushed a dark khaki color, followed by drk. khaki+white, adding a little more white to the mix for two or three more layers of overbrushing/drybrushing.
When I drybrushed, I stroked in the direction from the top left of the skull to the bottom right. This helped to simulate a light source to give the skull a little more depth.

I'll probably paint the other 20 or 30 skull markers I have, now.
5 comments:
Email ThisBlogThis!Share to TwitterShare to FacebookShare to Pinterest

I finished painting figures to represent a new samurai clan in my Steve Barber collection. Nothing new here, but it's nice to finally get these guys off the table so I can finish painting the new 40mm samurai figures (including my kago.) I guess there is one minor conversion here; on the yamabushi monk (second from right) I've taken away his staff, which would normally be in his back hand, and added the sword to his front hand. This was part of my original conversion intentions when I first commissioned this sculpt.