This is a tiny figure, especially since I'm painting 42mm samurai right now. The face was difficult to paint; I dug out some tiny brushes I hadn't used in a while to get the job done.
I've been wanting to play a goblin as my next D&D character, and this sculpt won out (I like my characters to have a nautical theme.) I wanted him to be a fighter/thief, and that's why I gave him a rapier instead of the cutlass. Oh- the orange skin: The original editions of D&D described goblins as having skin tones ranging from deep red to orange to yellow -- no green here. It was nice and refreshing to do a skin color I hadn't done before.
2 comments:
Email ThisBlogThis!Share to TwitterShare to FacebookShare to Pinterest

I started painting the new batch of samurai. I've finished applying the flesh layers as well as almost finishing my swordmaster. I was thinking about what I could use for Asian flesh tones (I forgot what I used last time; I need to start taking notes- or look for the notes I took a few years ago.) In the end, I simply used what I use for caucasian flesh tones- I just left off the last highlight. I think it looks just fine.

I'm fully happy with the head swap, too. The neck seams are mostly hidden, and the heads seem to fit their new bodies well- especially the fellow with the nagimaki at the ready, yelling his war cry as he prepares to receive the enemy.

I also still plan on doing this ninja in a red get-up, though, I may tone it down just a touch by doing her mostly in brown but with red highlights.

The next batch of 42mm samurai arrived from Steve Barber today. I got right to work. The unarmoured samurai has had his fan replaced with a katana hammered out of brass rod (with a handguard made from greenstuff.) The peasants have had their heads swapped. I've made a nagimaki for one of them (just to change things up a bit from all the spears/yari.
The ninja was not changed in any way. I just included it for completeness' sake. It is a female ninja using a small blowgun. I think I may paint her with a more fantastical red scheme. 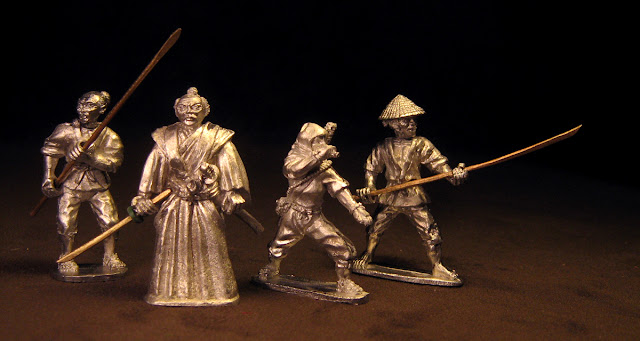 Since I didn't have anything lined up after my samurai- and since I was actually in the mood to paint, I grabbed a couple random figures off the old lead mountain. First up is a 32mm heroic scale samurai/ronin from Warcrow(?) He's been sitting around for a couple years. If I had known how easy and fast he would paint up, he'd have been done faster (it only took about an hour and a half to finish both figures here). Oh well; he's done now. I'll use him as yet another character/figure for playing D&D.

Next up is an older 40mm cowboy from HLBS (the range long since discontinued.) I think I have a couple more 40mm old west figures lying around needing to be painted- one each from HLBS and Knuckleduster. Hmm, I should go check out to see what Knuckleduster has been up to. I had been meaning to pick up a few more of their civilians.

Any new old west figures will be for later. I think I'm settled in with the Steve Barber samurai (I've ordered a few more, with another small order planned for late February/March.) The current order is for a couple more of the peasants (which I will do a headswap on), another ninja (female with a blowdart- I haven't seen photos, but it sounded intriguing), and an unarmoured samurai whose fan I will replace with a sword (katana for those of you who want me to "get it right!")
I will take my time with this next round of samurai (like the last round) with the possibility of more Japanese accessories/buildings during the paint. Any ideas for Japanese "stuff?" More goods, roadside shrine, small temple, small bridge? (And yes, I'm trying to keep everything "small" for this collection.)
No comments:
Email ThisBlogThis!Share to TwitterShare to FacebookShare to Pinterest

I finished a couple figures in one sitting. First up is the last of my 42mm samurai (should I buy more?) from the second group I started a few weeks ago. I like how the sashimono (with the skull) turned out. It was about the easiest part of the whole thing to paint. If I get any more samurai, I think I'm finished with red samurai. It's difficult for me to paint without muddying up everything with my impatiently thick layers. Maybe a yellow samurai next time? I do enjoy Foundry's yellow ochre triad (the color of this guy's sashimono).

Next up is a Reaper figure I painted up almost as an afterthought -- Usually, when I paint a figure, I'll have one or two random figures off to the side to paint while I wait for layers on my main figure to dry. This barbarian was that figure off to the side while I finished my last samurai. The figure is Reaper Warlord figure No. 14620 Barbarian Axeman of Icingstead. I like the sculpt except for the face. On the Reaper site, the face looks great, but in person, it's a bit small, and there's not a lot of detail; it was a bit of a challenge to paint. But the rest of the figure painted up great, and I like the simple, no-frills pose so that he will not stand out too much on the D&D table when the DM is looking for someone to take out his frustrations on.

And here's the hut complete with thatched roof (which is not quite dry; I was impatient.) I went with a longer-haired fake fur (as opposed to toweling) to better suit the larger scale figures. 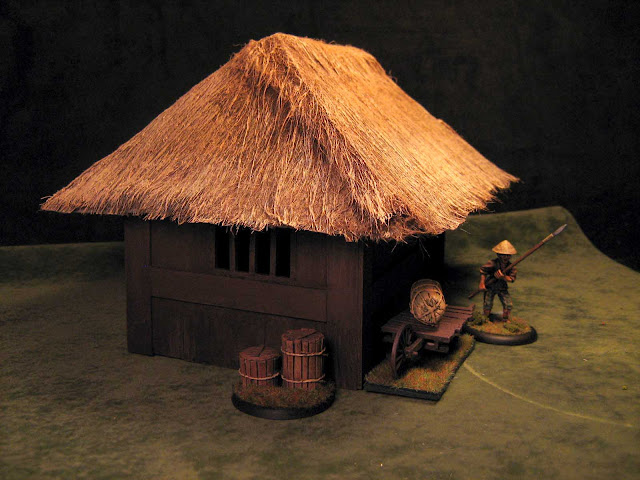 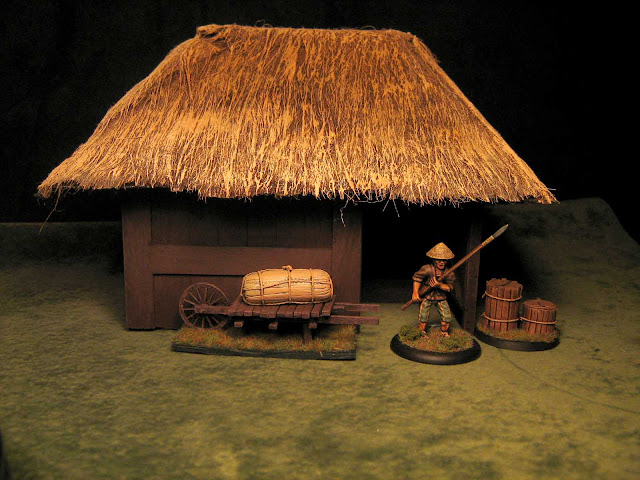 I'm making great progress on my peasants hut- the "fur" thatch on the roof is drying; it looks good for my first try at thatching. I've also added a couple details to my samurai.

I've also found a little time to doodle up some more envelopes for letters to friends: 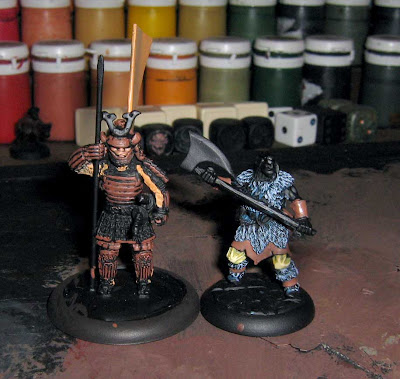 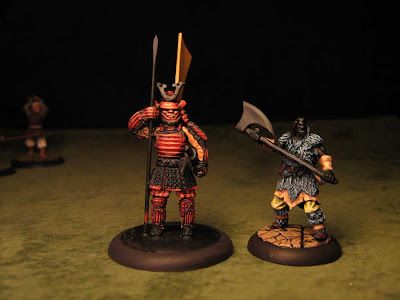