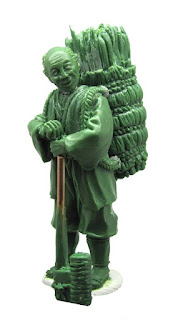 Over the past few months, I've commissioned three more figures through Steve Barber Models. I look forward to adding them to my 40mm Japanese collection.
I have plenty of samurai, so the last few (and next couple) commissions have been of civilians. The first of these recent three is a woodsman resting with his ax to the ground, bound with a protective, woven blade cover. All those other samurai have plenty of grimacing and other war faces expressed in their sculpting, so I chose to have my woodsman smiling.

I've also commissioned a peasant women carrying a pack. I always look for opportunities for conversions with these commissions, so the woman will have a separate, empty-handed arm, so that a tool or bucket can be placed in it. Steve and I also talked and mentioned she could be holding the hand of a young child. Always plenty of ideas.

Steve also sculpted two separate different pack options for her: A basket full of persimmons to be sold at market, or a bundle of firewood (with which she could make a good companion piece with the woodsman.) The woodsman also has a separate pack that can probably be used with the peasant woman. So between the pack options and the open hand, you could get three or four of these figures, and convert each one into a completely different personage. 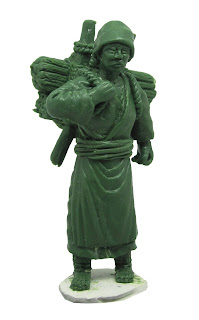 Next up will be a figure commonly seen in most Japanese/samurai miniature collections: The Komuso Monk. Now here's the thing. It seems there are quite a few 28mm komuso (and Komuso in gaming/pulp art) who carry a sword -- one of the monks in the upcoming Rising Tides game, for example. As the legend/myth goes, the costume was a great way for samurai/ninja/operatives to sneak up or observe the enemy unnoticed.

No, I want my komuso to actually be a monk, simply zenning out on his shakuhachi. All my other monks are already armed to the teeth, so I'm letting this fellow walk in peace. No sword will be included.

(Maybe I'm way off course here; Any historians out there? Did some Komuso carry a sword? It also seems, if you're using the costume as a disguise, the sword might give you away. Really, I'm only going on what I've seen -- I admittedly haven't read to much on the subject. But I know enough that the sculpt without a sword will be just fine.)

And here are some more photos of my current collection for you to enjoy :) 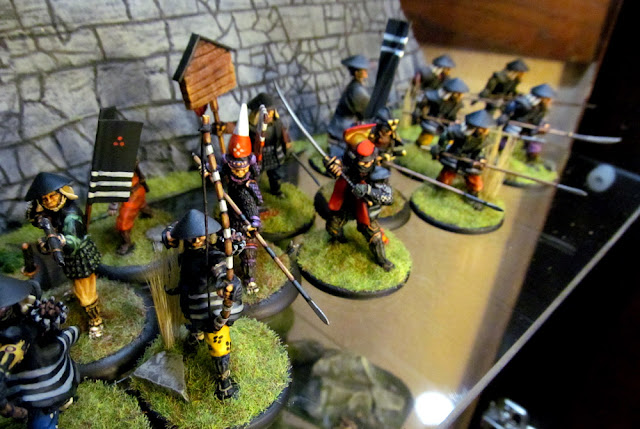 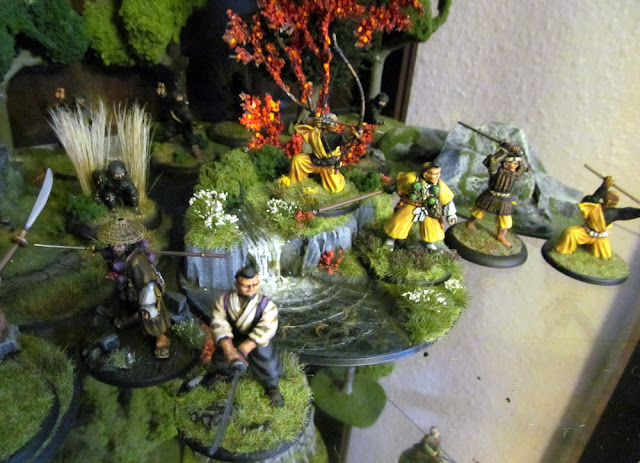 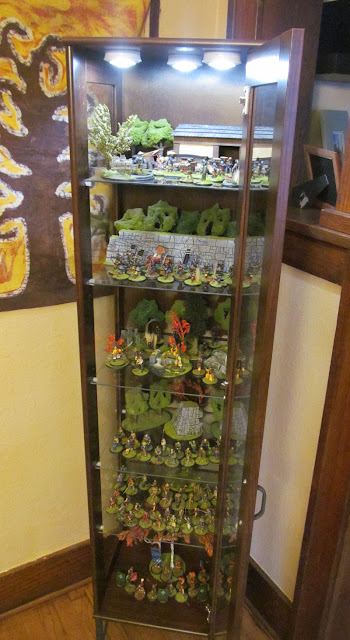 Except for the 40mm samurai I get from Steve Barber Models, I've only been painting plastic figures these days, and mostly those from board games; it's nice to actually get to use your creations sometimes rather than letting them get dusty on display (my 40mm metal samurai are in a closed case; no dust for them!)
A lot of these boardgames I've been painting or painted (Conan, Zombicide, Mice and Mystics, Space Cadets Away Missions) have a nice group of heroes and usually a ton of enemy minions to paint. It's the minions that are usually the daunting part to paint.

Zombicide was easy -- It was just a lot of drybrushing a few layers of gray; 300 figures finished in about 4 hours (over a couple sittings.) With Space Cadets, I went a little more hybrid, painting a monochromatic hue, but painting heads and hands green to add a splash of color to the aliens. Mice and Mystics had fewer minions, so I actually took a little extra time with them (and that collection looks great for the patience.)

With Conan, I'm using the same drybrushing technique as with Zombicide, but that is simply to lay down the basic/dominant colors. Next, I will use black paint to clean up the edges, and then I'll paint the skin in three or four layers (as per my usual basic technique), and details such as belts, bags, weapons, and such. It will take a little longer than usual, but that first two or three layers of drybrushing the dominant color certainly jumpstarts the process.

And what I'm finding out about myself is that I'm more willing to paint a figure that already has color on it than one that is sitting, covered with nothing but primer.
No comments:
Email ThisBlogThis!Share to TwitterShare to FacebookShare to Pinterest
Newer Posts Older Posts Home
Subscribe to: Posts (Atom)