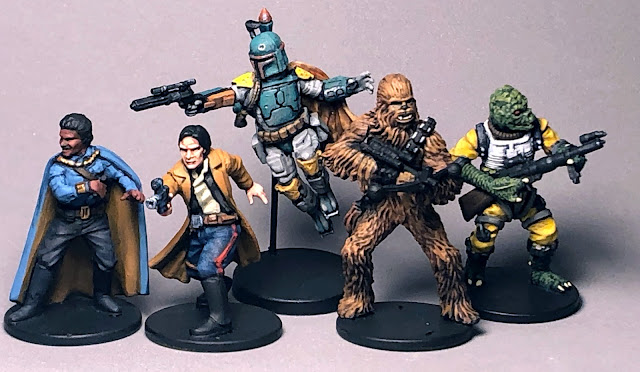 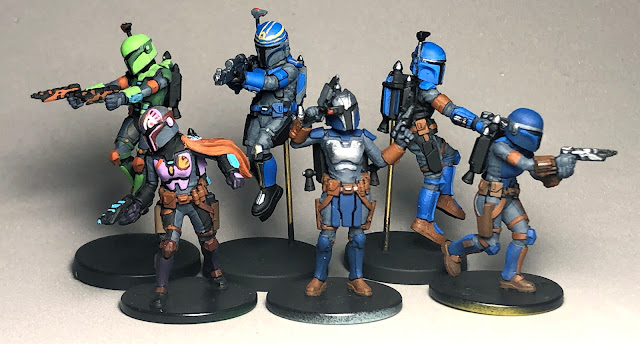 Last Christmas, I couldn't resist getting some Star Wars Legion minis -- My wife and I don't play SW Legion, but we do play Zombicide Invader. So we've got these two teams (plus one more yet unpainted) to use as alternative survivors for the game (I still need to make custom cards!)

My wife had fun painting all the Mandalorians (except Boba Fett who I got to paint), and I enjoyed painting the classic characters.

Nothing special to mention about the painting or assembly of these figures. They assemble very easily, and there's no conversion work. I'm still hoping Legion comes out with one more bounty hunter or rogue who will fit in with Jabba's pre-New Hope gang here so I can make it a full 6-survivor team.

Dreadball: New teams (to us anyway)

My wife and I painted up a couple new Dreadball teams to play!

She did a great job with a full team of mechanites -- The Loose Cogs.
I assembled them for her, and expected to help out painting a few, but she took over and did a great job. She did it all: She "built" each team member on paper; organized her strikers, jacks and guards; and chose colors to reflect that organization (mostly green are guards, tan/beige/gold are the strikers, and blue are the jacks.)

And then she painted all of them, and despite the different colors for different roles, she used a nice limited palette to keep the team unified. I'm proud of my sweety -- and also scared of her team; I'm pretty sure my hobgoblins are going to take a beating.

Speaking of which, I painted myself the "Hobgob Scachens." Not much to say about them except they were fun to paint! Also, I painted up the team captain, Graggot. He's one of my first all-resin figures, so I'm a little daunted, but I haven't chipped any pieces off yet! But he painted up just fine. 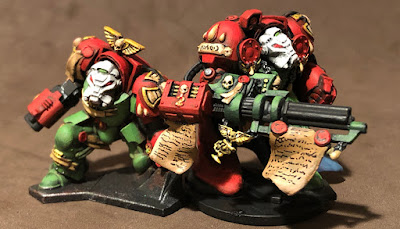 Here are most of the minions from the Conan game. These also represent the first collaborative/assembly line-painted minis between my wife and me (with a couple exceptions, such as with the Aesir and frost giant ((by my wife)) and the Stygian assassins ((by me)). 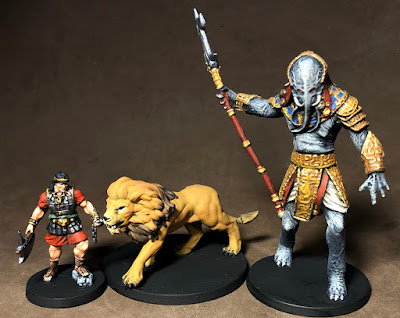 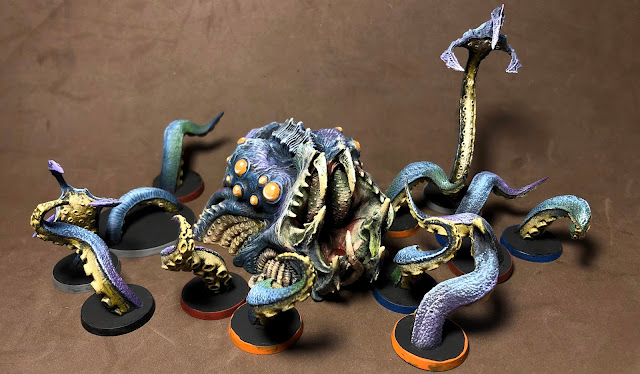 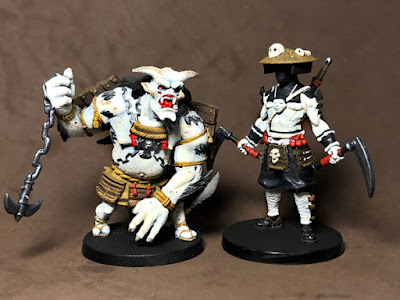 Okko is the most recent game that we have started painting. By "we" I mean Elizabeth -- my wife.

I got lucky finding her. She is a monster (in a good way) at the painting table -- with a better paint-work ethic than me. We've divided up the figures between us to lighten the load, and she has finished most of hers from the previous games mentioned earlier on this blog -- so she's moved on to Okko, a nice-looking 1-vs-many miniatures board game based on the comic of the same name.

Elizabeth only has a few things painted, having only started two or three weeks ago, but it's a few things more than I have done. The images here are all her painting. I still have stuff from Rise of Moloch to paint! 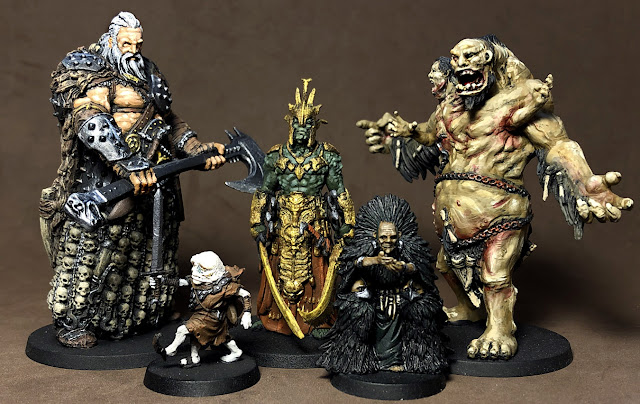 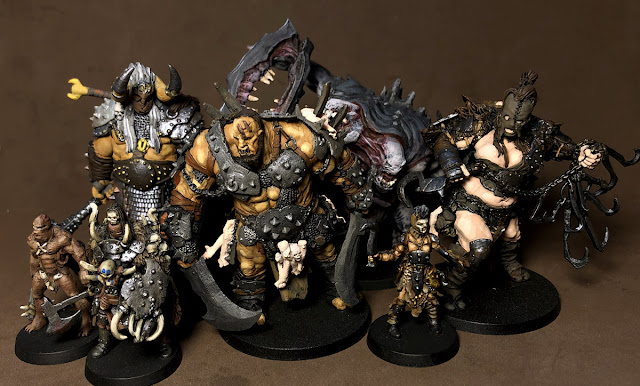 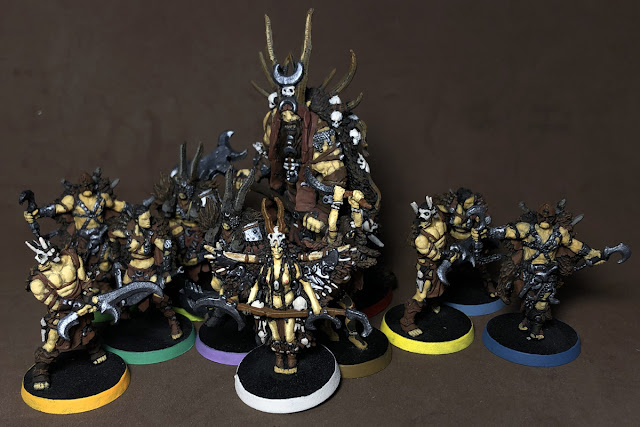 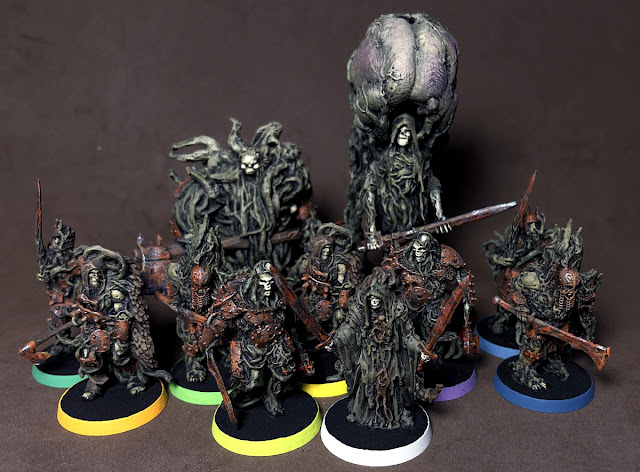 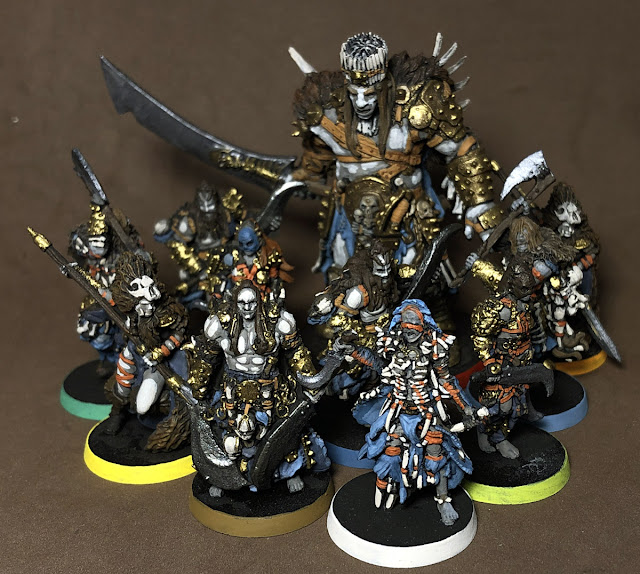 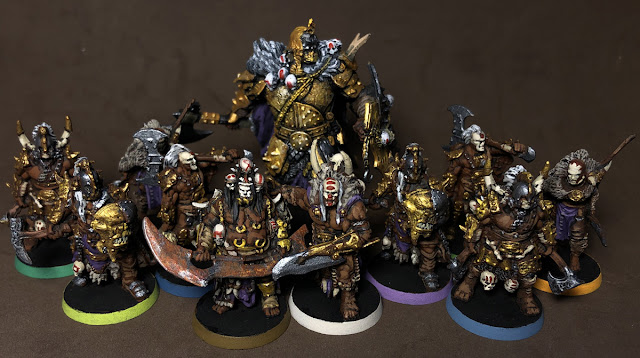 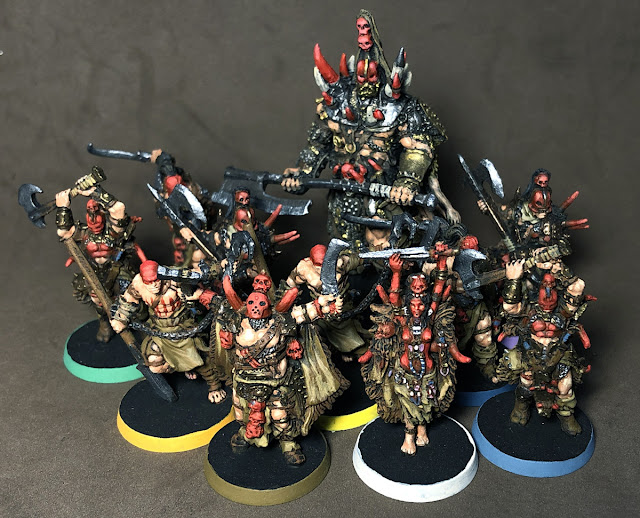 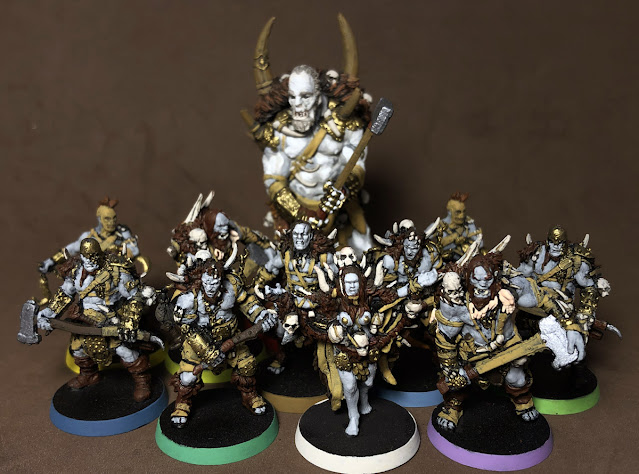 Zombicide Invader was the first Zombicide Kickstarter my wife and I decided to get, and the painting seems to have gone a little faster with this one. We have a majority of the survivors finished, but still have plenty of xenos and abominations to complete.
This isn't everything, just the most recently finished figures. I've also included the bots, sentry guns, and some custom objective markers taken from various manufacturers. 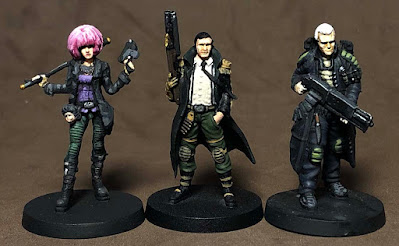 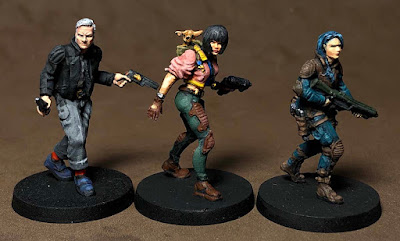 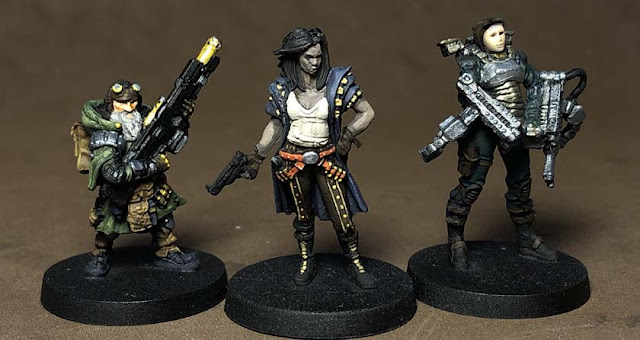 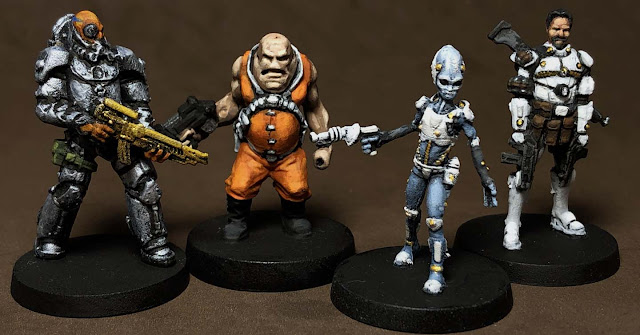 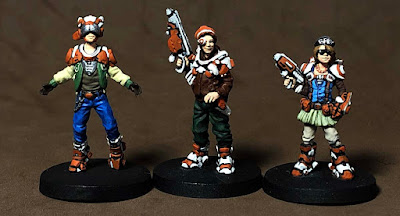 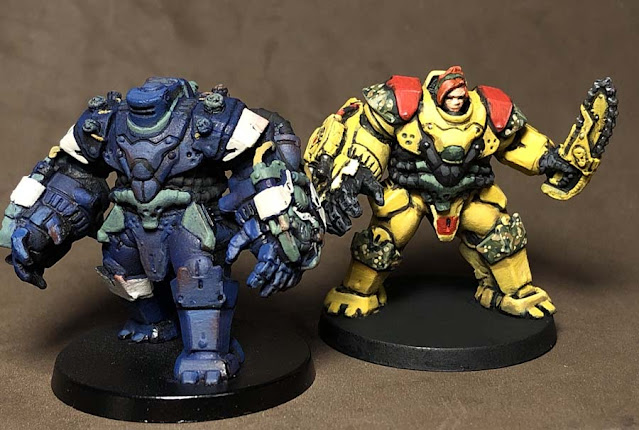 Catching Up: Smog, the Rise of Moloch 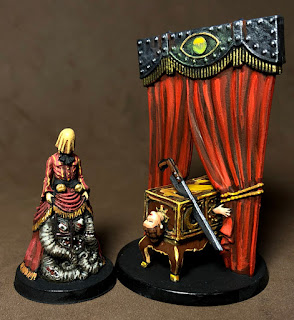 This was the first Kickstarter game my wife and I chose together. She was into the Victorian theme whereas I just enjoyed the sheer freakiness of the whole ensemble. We're still painting it on and off; we haven't played it in a long while, but I think we're getting close to finished with it.
I already posted a huge array of what we finished in our first bout with the game a couple years ago (3 years??) Here are a few more random figures that have been finished over the past few months/year. 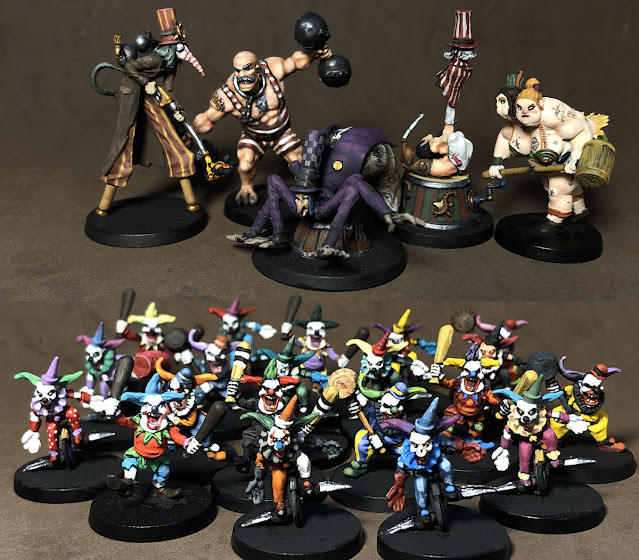 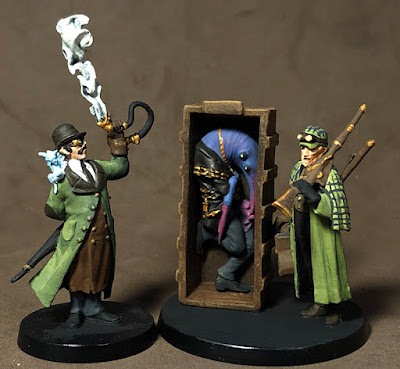 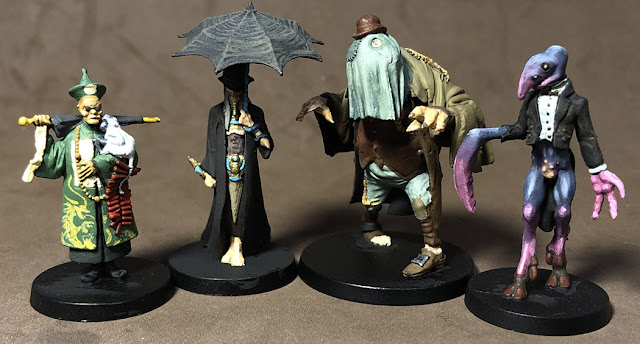 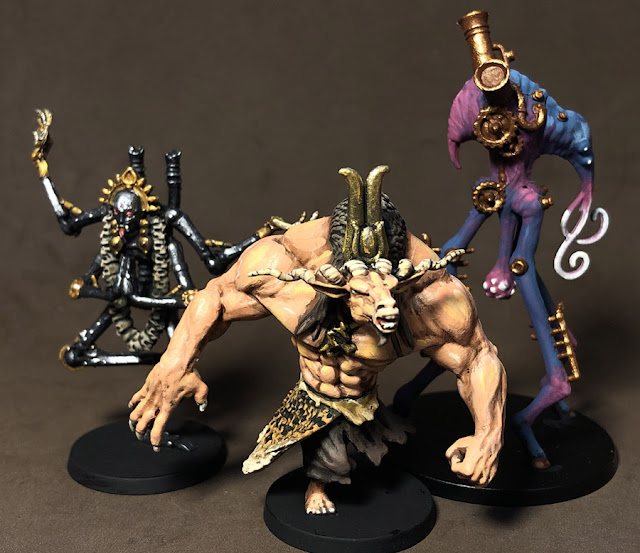 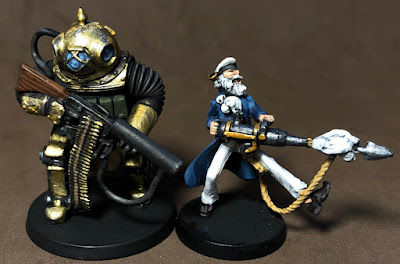 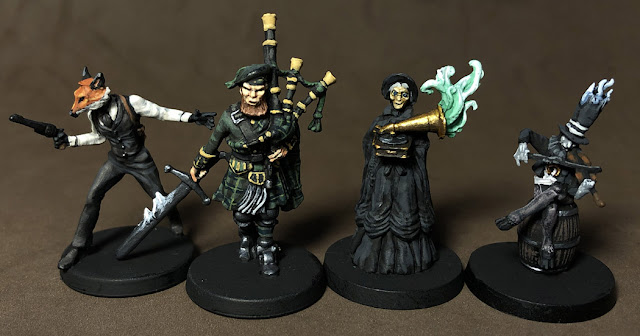