Well, I've painted a couple things, and now I'm having creative block; anyone have any suggestions of what they would like to see next on the blog? Another figure painted? Specific genre of figure to be painted? Small piece of terrain? Sculpey project?

I do have another mini I need to paint: Tobias Winterthorn, half-elf druid (from Reaper.) I'll post it when it's finished, of course, I'm just looking for something else.

In other areas of the hobby, I ust finished a session of D&D had fun, My goliath barbarian did a rage strike armed only with a broom handle - and rolled a crit. So it was a good start for my new mini :)
I also will be using that mini for playing Red Sand, Blue Sky by Two Hour Wargames, my favorite gladiator game. I enjoy Two Hour Wargame's games because you can play them solo. Sometimes, friends are just busy, or it's the middle of the week, and I need to make some puppets dance! On the THW Yahoo group, they've announced a free version of some basic swordplay rules will be released next week. I urge everyone to try the rules out!

For my (40mm) Old West fans, I'd like to direct you to Knuckleduster's new blog at knuckleduster40mm.blogspot.com/. Forrest shows off some of his sculpts there and offers thoughts about his work. Good stuff.

I've seen some EXCELLENT dinosaur greens over at the Dazed Miniatures Yahoo Group. You'll have to join to see them ( I think.) Bob over at RLBPS has something special with Dazed Minatures. I think this will become the premier range of 28mm prehistoric and modern animals (at least after HLBS sells off the rest of its fantastic animals- I hope all those sculpts get bought up by others; HLBS's animals deserve better in the future than just another image at Stuff of Legends.) But go take a look at what Dazed has already done over at RLBPS. And maybe HLBS has some animals left over yet. If not, check out their 40mm catalogue of fun!

And finally, for those of you looking for something new to paint, try Copplestone's Glory of the Sun range. I can't imagine what I would need an army of these for, but I'd certainly enjoy painting one or two of these; As I've mentioned early in this blog, Copplestone sculpts are some of the most painter-friendly I've ever painted.

And no, none of these folks sponsor me; I'm not shilling for them on purpose. These are just companies, blogs and games I like, personally. So, until I can get something new on this blog, go check these others out for the time being.
6 comments:
Email ThisBlogThis!Share to TwitterShare to FacebookShare to Pinterest

Nothing you haven't seen already

Just a quick post for linking to other forums I frequent for showing off :) Carry on.
No comments:
Email ThisBlogThis!Share to TwitterShare to FacebookShare to Pinterest 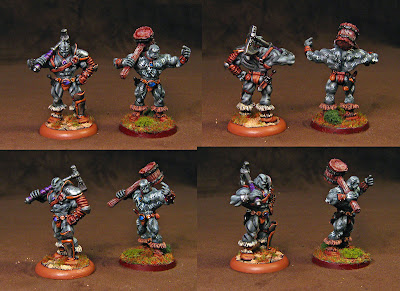 Here's them Goliaths all finished up! They look all right, I reckon'. I wasn't looking for a great paint job; I did these more for the practice with conversion work as well as for new characters in our D&D game. For you D&Ders, the figure to the right is to be a Goliath warden; and the figure to the left (my character) is a Goliath Barbarian (and former gladiator, hence the hodge podge of armor ((and only one greave)).)
I should have set a 28mm mini next to these for comaprison: These figures stand 40mm tall -- perfect as goliaths at 28mm scale.
No comments:
Email ThisBlogThis!Share to TwitterShare to FacebookShare to Pinterest

I finally started painting the goliaths. I'm content with the painting. The goliath to the right in the final picture is covered in tally marks. You'll see the rest of the marks all over his body when I post final pics.
The photography isn't up to par, mostly because I took the shots sitting at the work table. The glossiness of the Foundry paints didn't help either. Maybe this is why I stopped doing other step-by-steps? I may just take pics of these goliaths when they are finished rather than more step-by-steps.
Would folks still prefer step-by-step photos, or would you prefer what I've been doing: Pics of the finished product with a post-mortem description of what I've done? I would prefer the latter; most of the techniques I use are well-known already; I'm not showing anything new (with the painting anyway; I'm still proud of my greenstuff and sculpey conversions and creations.)
No comments:
Email ThisBlogThis!Share to TwitterShare to FacebookShare to Pinterest

It's not all about minis

I was sick this weekend, so I didn't get to any of the painting I had planned. Today, I still didn't have the bug, but I still needed to get my art on. So I went to the horse farms over at Iowa State University and did some sketches. My supplies were a brush, a pen, some water and about an hour of time. This is three pages of stuff; I had one more page of "notes," really rough gestural sketches and such.
I think miniature painters -- or any artist -- should have one or two other media to partake in. It helps to rest the mind, I think. It doesn't have to be painting or drawing; it could be music or writing. Even reading is an excellent way to relax the brain.
1 comment:
Email ThisBlogThis!Share to TwitterShare to FacebookShare to Pinterest 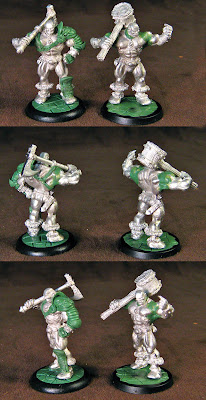 UPDATE: I've torn the greave off; I'm gonna have another go at it. Luckily I didn't get too far- just gotta re-prime a little bit.
No comments:
Email ThisBlogThis!Share to TwitterShare to FacebookShare to Pinterest
Newer Posts Older Posts Home
Subscribe to: Posts (Atom)