And here are my Rocketeers for Space Cadets: Away Missions. Nothing much innovated here; I painted them up just like on the box.

I'm happy that I got everything painted up so fast. It's nice to get a project cleared off the table before the next one arrives (I have two minis games "scheduled" to arrive in October -- Dragon Tides and Mercs.) In the interim, I should be able to finish up some older 40mm samurai (and maybe the newer palanquin retinue, too.)
6 comments:
Email ThisBlogThis!Share to TwitterShare to FacebookShare to Pinterest

You need brains to play Space Cadets: Away Missions 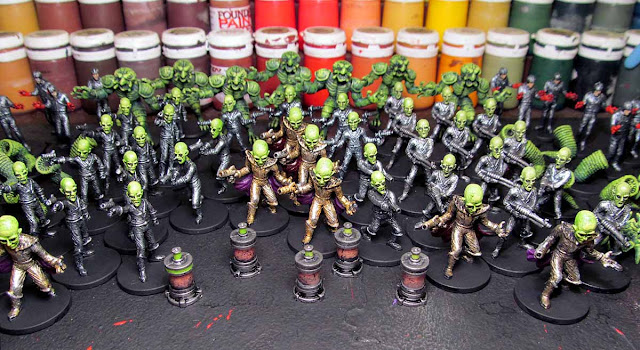 I didn't count the hours (let's say it was three,) but I painted my entire alien force in two sittings for the new board game, Space Cadets Away Missions.

For Zombicide, there were three main factors steering me toward monochrome zombies:
-- If they were full color, the survivor figures would have blended in with the zombies on the board.
-- I wanted to pay tribute to the first Romero movie (Night of the Living Dead.)
-- I wanted to get everything painted fast.

Well, for Space Cadets, I certainly wanted to get everything done fast, but I wasn't sure at the last moment if I wanted to go monochrome. So I compromised. I drybrushed the uniforms and weapons in silver. The I drybrushed the heads in three shades of green (starting with light green, highlighting with yellow.) The effect was good enough for me!
I did do the leeches, bugs and sentinels in monochrome green, though. Instead of tying everything together with one monochromatic color, I tied them altogether with the simple scheme: Green/silver.
I think it worked. Everything is in "full color," and everything is easily identifiable.

How I did the brains/step-by-step

The tinted resin serves the double purpose of looking like liquid and keeping the jar glued together. And it's pretty easy to do.

Paint and Primer: Use Army Painter Black matte primer (best for pvc plastics, I think) and then whatever acrylic paint you prefer

1: Mask of the clear cylinders so that you don't get primer on the clear portion. Be sure to pinch off the bottom of the tape so that any primer won't sneak in through the bottom.
2: Prime everything. Keep the tape on and paint the top portion of the jar. Once dry, go ahead and peel off your masking tape.
3: Go ahead and prime and paint the bottom portion of the brain in jar (the pedestal and the brain.)
4: Prepare some two-part epoxy resin (I like five-minute). Now place just a TOUCH of red paint into your resin, just enough to tint it. It's an unbelievably small amount you'll need.
5: Use a toothpick to gently drop some of the resin into the jars. It's difficult to gauge, but I try to fill them about half way -- remember that there will be some brain filling the remainder of the jar.
6: Place the jar over the base and push together. They should slip/snap right in.

To scratch the Zombicide itch while I (we) wait for the Black Plague pledge manager, I finished up a few more survivors from the last KS campaign. These are most of the film and TV survivors. It was fun to get back and paint survivors again.

I still have samurai, Mice and Mystics, and Space Cadets on the way. Plenty to paint! I also don't have internet at home anymore, so these posts might slow down a little. Might; I've already slowed a bit the past few months as my painting mojo weakened. It's slowly building again though. Hopefully, my Space Cadets will arrive in the next few days: I have vacation starting this weekend, and I'll be staying home, so I'll have plenty of painting time. Space Cadets equals more monochromatic fun!
3 comments:
Email ThisBlogThis!Share to TwitterShare to FacebookShare to Pinterest
Newer Posts Older Posts Home
Subscribe to: Posts (Atom)