Apocalators: Heat in the Wasteland

Here's the last of my Apocalators for a long while. I'll probably use him as an enforcer in the arena, making sure the other combatants don't stand around catching their breath for too long.

I chose green skin, as I mentioned before, as a little homage to the green screamers from the short story "A Boy and His Dog." The screamers were irradiated mutants who could burn you with just a touch. Hence, my screamer can also burn you.

The shield is a Tamiya 1/32 scale figure base with the wheel from a 1/35 scale kettenkrad (seen as post-apoc terrain elsewhere in this blog.) The flame thrower is a cut-down WWII machine gun ( I forget what kind), with a German WWII gas mask container as the muzzle (and a hose made from rolled and cured greenstuff). All of these items were leftover bits from my kettenkrad kit.

Now I can go off and begin the first fights of the Pompay Portico....

By the way, just to show a bit of the versatility of the Bronze Age generic figures, here are the four figures I created using the same pose. On the last figure (my apocalator), I reposed the arm a bit (simply bent it a little):

Here's another freelance driver for playing Qwik. I gave her an extra-large blade so that she can also take to the Pompeii Portico.

So that leaves one more 54mm Qwik/Apocalator to go -- the flamethrower. After he's done, I was thinking about painting up a couple more pulp figures; I think I may have a couple unfinished figures tucked away in a case somewhere.
3 comments:
Email ThisBlogThis!Share to TwitterShare to FacebookShare to Pinterest

Holy shit, I finished a couple figures finally. These are my first official "Apocalators;" figures specifically converted for post-apoc combat. Legarius is at the top and Sextius beneath. Not much to say about them. The Stop sign turned out better than I thought it would, but the Children at play sign still feels a bit rough. Maybe a bit more weathering will cover up the roughness.

After seeing these finished, I'm thinking I should have taken the head off Sextius. I sculpted the helmet around the figure's head, but I could have sculpted the helmet around a simple armature and saved the sculpted head for potential conversion work. A casualty of sculpting/converting without a plan. Oh well, live and learn. I still got two nice figures out of it all.
2 comments:
Email ThisBlogThis!Share to TwitterShare to FacebookShare to Pinterest

I've added a couple more colors to my apocalators (honestly, I could finish one or two tonight if I get off my lazy, overworked ass... I'll give it a go.)

In the meantime, I've dipped my toes into boardgame design. I'm not sure if I can say what it's about or with which company just yet- the idea and proposal were sent only yesterday (and met with enthusiastic reaction.) So I'm going to see if I can develop my idea to fruition. If it's ok with the company, I'll start keeping a design diary at this blog.

Ok, let me go see if I can pull away from the TV and grab a paintbrush....
No comments:
Email ThisBlogThis!Share to TwitterShare to FacebookShare to Pinterest 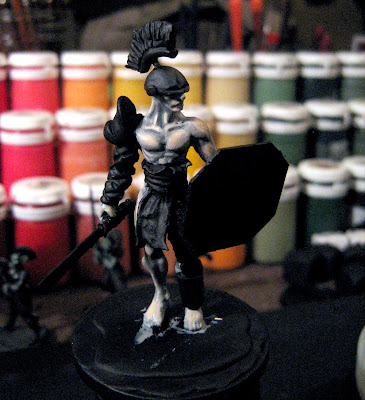 I didn't think my work week would be this bad. I managed to get some skin painted on this apocalator last weekend, and only tonight had enough time to get a quick photo to show everybody I'm still around. Not sure when I'll get some more paint thrown onto these figures.

For this figure, I went the "Brom" route in color selection. Besides the stop sign, this figure was feeling too "ancient" for my taste, so I wanted to do something to help bring him back to the apocalypse. Hence, the Brom paint job.

I may do something totally different for one of the other apocalators as well -- perhaps a sickly green for my flamethrower (let's call him "Burner.") Burner's green skin would be my homage to A Boy and His Dog (in reference to the burnpit screamers.)
1 comment:
Email ThisBlogThis!Share to TwitterShare to FacebookShare to Pinterest

Just a quick reminder that Flash Point: Fire Rescue is still available for "preorder" over at Kickstarter.
I guess it's not really preorder, but rather a chance to throw in a little money to help back the project's start. And this is no print-and-play; the quality of the prototype looks very professional.

Also, I think buy purchasing/backing through Kickstarter, that will be your only opportunity to get a second, mounted promo map, as well as some little firemeeples* (*provided the Kickstart funds reach $30,000.)

If you want to take a look at the game, there is an active entry over at BGG. Click here.
And if you want to throw some money about, you can do that at the Kickstarter website here.

I'm just bringing this up because there's only a few days left if you want the extras (the mounted map boards and maybe some firemeeples.) I know I usually hang back on stuff like this, then forget about it before it's too late.


Apocalators update:
Nothing new on that front yet. Haven't had a chance to throw any color on. It's not that work has been too bad actually; the afternoons have been a lot cooler outside, so I've been taking advantage and getting in some good walking and hiking time. In fact, on one of my hikes, I found an old-fashioned water pump. So I had me a drink of water. Sounds simple here, but it was perfect zen at the time.
No comments:
Email ThisBlogThis!Share to TwitterShare to FacebookShare to Pinterest 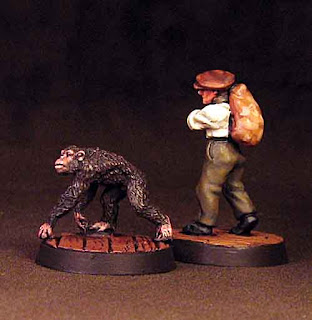 I don't know why I didn't paint this little guy up earlier; it took me a shorter time to paint him than it took to prepare him. I wanted to keep his hair relatively dark, so I only did one pass of the drybrush with a dark brown. I mixed the brown with a bit of flesh as a base coat for all the fleshy bits, adding successive amounts of flesh as I added layers. Done!
No comments:
Email ThisBlogThis!Share to TwitterShare to FacebookShare to Pinterest 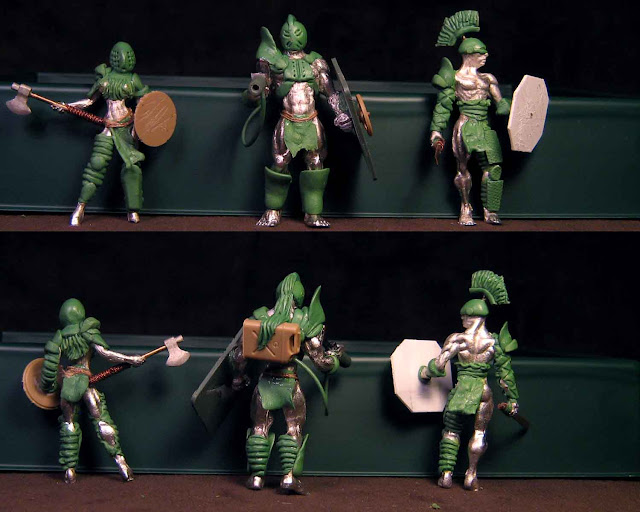 I've finished all the sculpt work for my apocalators. I start priming tonight. Painting might not start for a while; I might get a color or two thrown on during the week, then a few more layers next weekend. (It's gonna be one of those weeks at work.)

I thought of an idea for my flamethrower guy: One of the options granted a gladiator on the attack tables (or was it maneuver?) in Red Sands Blue Sky is the ability to step back and catch one's breath. Well, last time I played (I acted as referee, actually), the players were taking this option an aweful lot. It slowed the game way down. That's where flamey comes in; I'm gonna make him my enforcer, someone to motivate the other fighters. Wanna catch your breath? Not today, not when the crowd demands blood.

And yes, the fellow on the right is gonna get a stop sign shield. I've given him the informal name of "Crossing Guard" for the time being. The lady with the axe will also get a "sign" shield of some sort. I'm not sure which. Perhaps it will be children playing sign, or a European speed limit sign.

Knowing myself, it'll probably just be a circle of rust.
3 comments:
Email ThisBlogThis!Share to TwitterShare to FacebookShare to Pinterest 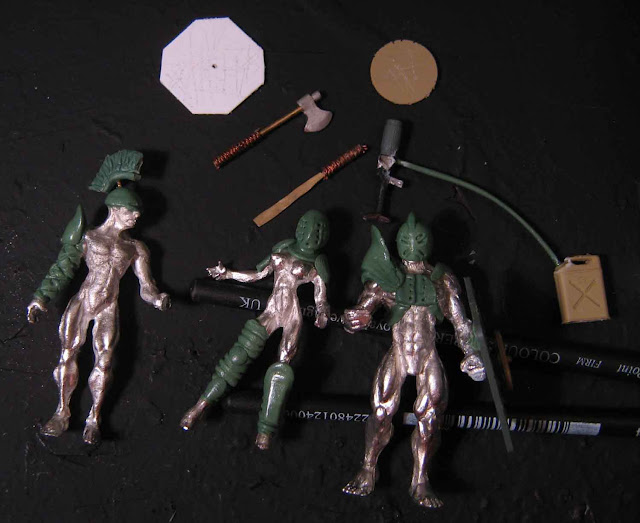 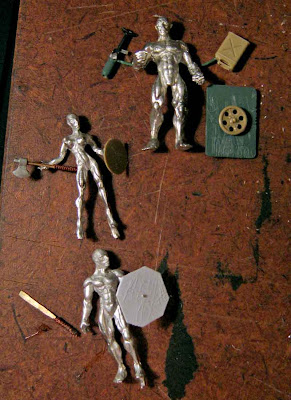 I've finally begun working on my apocalators (post-apocalyptic gladiators for those who aren't regular visitors to my blog.) Two of these figures will have the basic sword-and-shield setup, the female close to a thraex in her armor combo, and the male (with the octagon shield) will essentially be a murmillo. My Qwik figures will serve as a filler fighters with two-handed weapons, chains, etc.; These current figures are simply to give more options to my post-apoc gladiatorial combats.

The fellow with the bulkhead for a shield will be armed with a hand flamethrower. And no, I don't have any rules for it yet, but when I asked for some ideas for post-apoc weaponry, someone at my local gamestore said one of the fighters should have a flamethrower. I thought how unfair that would be to the other fighters: Perfect.

You might also notice I'm not at Gencon. My ride fell through; too long of a story. But I've saved myself transportation and hotel money, and still got the week off. I've spent a little bit of money on boardgames this week, picking up Shogun (Queen's Games version), Factory Fun (think Galaxy Trucker+Factory Floor), Nemo's War and Zulu's on the Ramparts (both from Victory Point Games ... Have you visited them yet?)

When hell at work dies down in February (or if I win the lottery), I should have time to play some boardgames.
3 comments:
Email ThisBlogThis!Share to TwitterShare to FacebookShare to Pinterest

While I'm on the subject of games by micro-publishers, I happened across a little yet-to-be published gem over at Boardgame Geek. The game is called Flash Point: Fire Rescue, and it satisfies a couple conditions that have been drawing me to certain games lately -- smalltime publisher, solitaire suitable, and a theme not usually seen in the boardgame world. And that theme, of course, is firefighters vs. fire. The only other (non-abstract) firefighter game I can think of right off is Smokejumpers.

In Flash Point, your team of firefighters not only must battle smoke and flames, but they must search for victims and be wary of hazardous/volatile materials. The game board is a gridded map of a home. The players spend action points so that their firefighter(s) can accomplish specific tasks. Some firefighters are specialists, able to do some actions for free or for fewer AP. That's the quick basics of the game.

Now here's the rub: The game is VERY indie, and has yet to be published. Mostly because the designer is currently seeking funding for the game. He set an original goal ($5,000 I think?) which was quickly met, but the maps were to be unmounted at that point, and folks were requesting mounted maps. Well, the designer decided to set a new goal that would fund mounted maps. That new goal is $15,000. A couple weeks ago, I saw this new goal and thought it would be difficult to reach. Today, I looked, and the funding level is almost to $14,000! So I'm helping to spread the word (nope, I'm not getting anything in return for this effort; this post wasn't solicited.)

Anyway, go take a look at the funding page here. The rules are also available for download at that link so that you can see how the game plays before deciding if you want to back it.
You can also learn more about the game at Board Game Geek here.
No comments:
Email ThisBlogThis!Share to TwitterShare to FacebookShare to Pinterest
Newer Posts Older Posts Home
Subscribe to: Posts (Atom)