I've been without internet for a while (a couple months), and it's not so bad; I've been getting reacquainted with some TV, been getting outside for some nice long walks, and I've been getting back to the painting table and canvas. I just haven't been able to update the blog as often as I'd like.

Actually, the past couple weeks, I've slowed a touch on the minis painting, but I still sit down to add a layer or two to whatever is at hand. I hope to have my 40mm samurai baggage carriers and kago bearers finished soo
n, now that I've finally settled on a simple scheme/palette.

I still need to paint the kago/palanquin (which has been started,) but it will take a little more time. It's not difficult to paint, but it will still take a patient hand.

I've also put in a small order from Bronze Age Miniatures for a few more of the 54mm generics; I figured it was time to add to the 54mm post-apoc collection. I have some ideas (which are sketched out on the Posdt-It notes behind my Japanese figures in the photo.)

In the meantime, here's a photo of a Mouse painting I did on my jacket. I was bored and I saw that my jacket was somewhat plain. 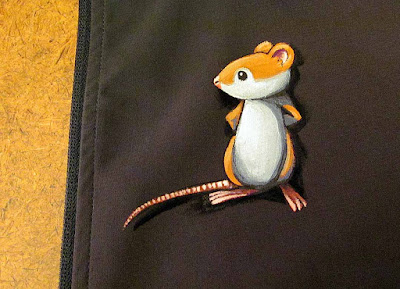