Reaper No. 02568: D'Khul, Bathalian (And Gamma World introduces me to puberty)


Here's another one of Jeff's figures. I had to reprime some of Rob's Warmachine minis, so while they were drying, I finished up this Bathalian figure. He was pretty easy. The trim and ornamentation was simply drybrushed with a couple shades of blue (Foundry Storm blue 21c and Sky Blue 39c). The yellows are all Foundry Ochre 4A-C, straight out of the pot with no intermediary mixes.

Yep, this figure was pretty straightforward. Rob's Warmachine are next (and I actually have already added a couple colors here and there; Re-priming is finished.) After Rob's stuff, I have some Gamma World minis to paint -- They came today! Great looking figures, but only a few are actually true 25mm. The rest are in a variety of sizes from 25mm to 35mm! I like this variety because, in the future when I add more figures, it will be easy to cull from different manufacturers without worrying if anything is going to match.

There was a little bit of lead rot on a couple of the minis, not enough to have eaten too much away, though. I filed away as much as I could, then washed the figures in some Simple Green. That seems to have dealt with the rot I could find. Hopefully, the priming and painting will slow or stop anything I couldn't see. But most of the figures were in excellent condition, especially for being from 1983, the year I started playing Gamma World (or was that 1982?)

Interesting story about my first Gamma World session; it wasn't so much the session, but who was playing. I was 9-years-old at the time (ah- 1983), and I had a 16-year-old (hot) baby sitter named Jackie. Jackie's 18-year-old sister (I forget her name) had just purchased a copy of Gamma World apparently (I was unawares at the time.) I had never heard of any kind of game beyond Monopoly or Stratego (not even Risk!)

SO, hot Jackie, one day, asks me, "Hey, you want to come over tonight? My sister and I want you to come over and try out a new game with us. It's called a (she said it slowly) 'roleplaying' game."

The only other thing I remember about playing Gamma World in those days was that I was a big cat man. And that was the last time I played any nerdly games with beautiful women.

Thank you, Gamma World, for introducing me to puberty and all the mutations I would suffer as a result.
No comments:
Email ThisBlogThis!Share to TwitterShare to FacebookShare to Pinterest

Angry pigs looking for gateways into other worlds; giant cockroaches with assault rifles; swarms of birds spreading radiation; scientist that appear when you just add water -- I think it's a winner. 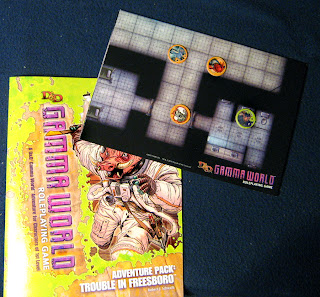 Also, during the D&D/Gamma World gameday, we used the tokens that came with the game; I actually enjoyed using the tokens, enough that I may not use miniatures for this game. That pretty much negates the dilemma of whether to use 15mm or 28mm figures.
But I may still use minis for the characters. And, really, since there are so many possibilities as to what the players could be, the figures would be more avatars rather than small representations of what the characters were actually playing. With this in mind, the selection of figures will be easy.
If I go 15mm, I'll get a small selection of Khurasan minis; if 28mm, I'll do a mix of Dark Age (though, they are pricey) and Reaper Chronoscope.
Until then, I may pick up another copy of the box set in Amazon (or eBay to see if anyone is just selling components), just for the extra tokens (though, having another copy of the rulebook wouldn't hurt; I'd sell off the extra cards.) 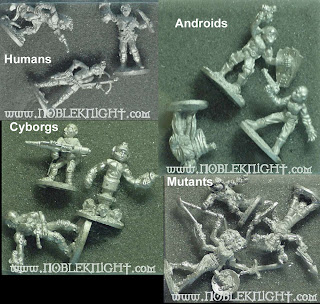 UPDATE: Oh, how could I have forgotten these. Sorry to all the other minis manufacturers, but I found a compromise over at NobleKnight Games: TSR Gamma World figures from the 1980s. Sometimes, I do just love that old school look, a look that will fit the new game very well. And these will be a nice median between 15mm and 28-30mm: I'm pretty sure these will be true 25mm figures. I also have a TSR box set of (Ral Partha) D&D fantasy minis that Jeff gave me. I think I will throw them into the gamma mix as well.


Oh boy- all this old-school talk is getting me into the mood to paint. Still have a few warmachine things for Rob, and a couple Reaper things for Jeff, and now some true 25s for me.

Here is the Witch Coven of Garlghast I painted for Rob. I thought those witches were going to be easy to paint, but they were fiddly, tiny little details here and there. I guess I've spoiled myself painting the larger scale figures. But they got painted, so that's what counts.

It might be a while until I paint more; I'm stressing out a bit since our newspaper got sold; I'm not sure if I'll have a job, or if the new owners will pay us enough to be worth a damn. Painting helps to reduce my stress, but I find it difficult to pick up a brush when I'm this stressed.
5 comments:
Email ThisBlogThis!Share to TwitterShare to FacebookShare to Pinterest

Believe me- I'm working on stuff!

Posts have slowed down a lot here- but I AM working on stuff (mostly assembly and priming). I still have a few Warmachine things to paint, as well as a few more Reaper figures. I'm going to try to start painting the Warmachine stuff Sunday evening.

I'm glad I didn't get into Warmachine- that's a crap-ton of heavy assembly there!

Anyway, just wanted to say I hadn't forgotten you all.

I got a copy of the new Gamma World (it's wacky, apocalyptic sweetness!) and have been working on my Dark Sun campaign. I DO have a good supply of minis to paint now, including a few of Jeff's Reaper figures, and a witches coven of some sort for Warmachine for Rob, who owns the local game store in town. I'll be gettin' to all/most of that this upcoming week. Gonna take a couple days for assembly and priming, but hopefully, I'll have stuff finished toward the end of the week.
No comments:
Email ThisBlogThis!Share to TwitterShare to FacebookShare to Pinterest

Here are a couple of Jeff's figures I've had for a little too long. The first is No. 2832 Ogre Chieftain. He was actually kinda fun to paint. He had a lot of stuff to paint, but I kept it simple by using the same base brown for almost everything; I simply took the highlighting further on some items (such as the leg wrappings, for example.)

The other figure is actually one of three figures in a pack, No. 2765 Astral Reavers. And, AND, I had that skin painted blue long before anyone knew what "Avatar" was. But Jeff loved the movie, so he'll probably enjoy this figure.I like the look of these reavers. I was thinking of getting a pack for myself for playing "Fairy Meat." There's nothing of note to mention about painting this figure. It did have a few tiny details, but the figure was simple enough otherwise.

I enjoyed painting both of these. I think part of it is because I'm getting back into the 28mm painting groove after a long stint with 42s, 54s, awesome little rocketships, and some adventures in sculpting. I'm sure I'll be back to doing all of that stuff, though. But, for now, a few more fantasy figures. Maybe I'll find some Dark Sun and Gamma World stuff to do later.

Here's a dragonman/born figure painted for Jeff. He had me remove the bell on the staff and replace it with an orb (which will get a gloss varnish to help the effect). This figure was ok to paint; it had a lot of different things to paint.Usually, when I dig a color out, I'm able to use it on multiple parts of a mini, saving time, but this dragonman just had too much sculpt on it, for my tastes. (I think this is one of the reasons some of my favorite sculpts come from Copplestone- his figures seem to have just the right amount of detail for me.)
On another note, one thing I think I will change in my normal painting routine is to paint smaller metallic objects using a simple non-metallic metal technique. I think it helps clarify what you're looking at without the distraction of actual reflecting light. For example, the large buckle plate, I painted with gold metallics, but it's difficult to see what it is. Maybe another solution would be for me to carefully layer the metallics? I'll give both methods a try in the future.
Now on to an astral reaver! (Jeff, the reaver is yours, too.)

Here are a few figures for Jeff's group. I don't have the numbers or names right off, but they are all Reaper figures. The bases are 25mm square from my bitz box.
I think these look all right, but I definitely felt rusty. After I finished them, I felt better about them. It's been a while since I've painted some straight-up heroic scale figures. I still have a dragonborn magic user to paint up (from this first batch of Jeff's figures.) I'll try to finish that one in the next couple days. That figure has a lot of stuff going on. 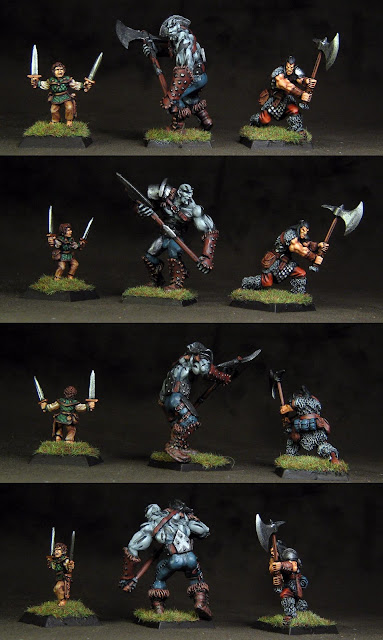 Well, I'll be headin' home soon. Back to work, but also back to painting minis. I've been checkin' up on the blog, and I'm glad see that folks are still stopping by to see what there is to see. Heck, I even picked up a couple new followers during my vacation (Welcome to the blog!)

Not much to report from vacation; it's in Nebraska-- I wanted a place to go where there was nothing to do, nothing to occupy the mind, something a little more zen than airport stress and busy beaches. I did a tiny bit of sketchin' out here, too. Plenty of time out here to do a lot of nothing; Oh man, how many minis I could have painted this week had I brought my stuff along. Oh well.