Here are my finished survivors from Zombicide: Black Plague. It was a long process, taking me weeks of on-and-off painting (while I work on my children's book/illustrations.)

It had been a while since I had painted medieval/fantasy figures; I forgot the amount of detail sculptors like to cram into those figures. Ugh. The modern Zombicide figures were great to paint fast -- Shirt, pants, shoes and gun, done -- but the fantasy figures: belts, baldric, armor, satchels, swords, daggers, scabbards, jerkin, boots, overload! But they do look pretty if I can get everything painted properly; half of my problem is identifying many of those details.

Now, I have a bunch of zombies to get done fast (my friends and I are playing on Sunday.) But they'll be getting the monochromatic treatment, so they shouldn't take more than a long afternoon. I'm going to try out brown for my monochromatic base color, and go from there. 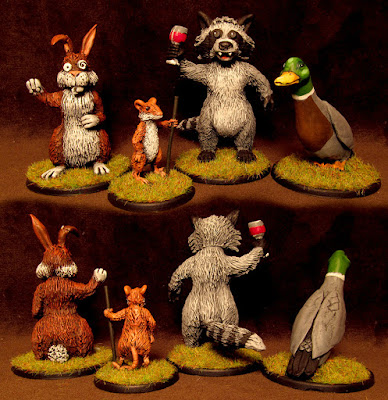 Oh right, speaking of the children's book I'm working on -- as a little vanity project, I commissioned Steve Barber (of Steve Barber Models) to sculpt me my little friends who are the subjects of my book. I showed the assembled sculpts in my previous post, but here they are all painted! I have a few more vinyl animals to paint and a couple more sets of Raccoon, Rabbit, Mouse and Duck yet to paint.

I better get them done fast (after my zombies): Just put into the mail are my copy of Soccer City, along with three teams worth of minis. They look a little bit more cartoony, so painting might go quick. I'll get a better idea once I see them in person.
10 comments:
Email ThisBlogThis!Share to TwitterShare to FacebookShare to Pinterest

Took a break from the miniatures and started up on some animals. These are the vinyl toys that stand around -- you know, I don't know what scale these are -- but I've been repainting many of these to stand in as reference for illustrating my first children's book (which begins with the line, "Mouse! Mouse! Your piano flew away!")

Actually, most of these animals won't be in the book, but I DO have some actual figures for my characters sculpted (by Steve Barber of Steve Barber Models) and painted. I'll photograph them once I get them based ... hey. here's a pic of the sculpts (and yes, they're meant to be cartoony.)

I see this question a lot -- how do you paint soft plastic. Reaper says it's Bones minis don't need to be primed, which I think is perfectly true -- if you don't mind your paint chipping away like gangbusters. The problem -- My problem is that I use Testors to prime my figures, but on soft plastic, Testors (and a few other Walmart brands) always dry with a very sticky surface. Even Fusion brand which is supposed to be formulated for plastic dries very tacky.

After a few trials and experiments I hit upon my own method for getting soft plastic figures (and vinyl, which includes all those cool dinosaurs!)
Army Painter Primer. It sucks on metal (will chip away,) but it's about the most perfect plastic primer on the market. Now, it still has a minor issue: The stuff I get is labelled "matte," but it always dries with a glossy sheen. And this layer still doesn't hold a layer of paint as well as I would like. So after I prime a figure, I'll give it a brush layer of black craft paint -- Delta Ceramcoat Black to be specific.
Then paint as usual.

I did my first monochromatic zombies from Zombicide using this method. All of those zombies were thrown into a box together and have been stored like that for a couple years, and still no chips.
Granted, I still take care of my figures (I don't shake that box very much), but the AP+craft base layers still holds up well. If you already have Army Painter Primer, grab some Delta Ceramcoat and give this a try!

If you use a Walmart brand without any issues, let us know specifically which (specific) brand you use.
I wouldn't mind using the Walmart stuff -- Army Painter isn't cheap -- I just don't know which brand to try. "That 99 cent stuff" isn't an answer (that's about the only answer I can find on different forums.)
2 comments:
Email ThisBlogThis!Share to TwitterShare to FacebookShare to Pinterest
Newer Posts Older Posts Home
Subscribe to: Posts (Atom)