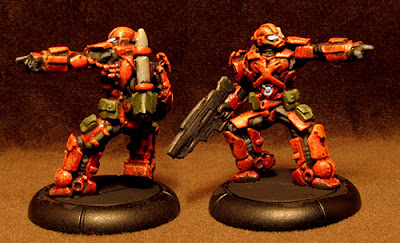 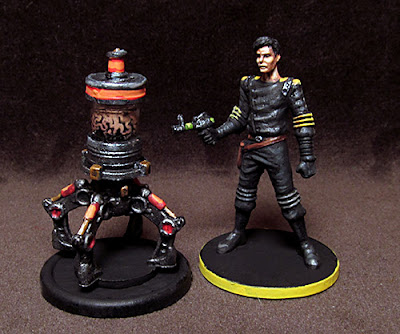 Just a quick random from the table. This is a brain in a jar from my copy of Space Cadets: Away Missions (a very fun game, by the way!) I've mounted this brain, however, on a set of robotic legs from my mechanite team (from Dreadball Xtreme.)

Hmm, just a thought, I have other robotic legs (and wheels) from the team and extra brains; I could mount all the brains and make a fun little brain-racing mini game.

All in good time, I've started painting my Mercs Recon figures. I'm trying out some speed-painting techniques. For example, for my Security Force (Secfor) figures, I've drybrushed a dark olive base, then drybrushed from top down with a light olive for a simple highlight. One layer and a highlight for the faces and hands. Black gloves, boots and guns and done! It took me about a half hour to do my 10 secfor figures. Should be faster for the next 10 or 20 when they arrive.

I did a similar technique with one of my Mercs (from the Waza group,) and it seemed to work well. Shouldn't take too long to get everything painted to at least boardgame quality -- and I'll certainly post pics of my Mercs stuff when I get a bunch done.
3 comments:
Email ThisBlogThis!Share to TwitterShare to FacebookShare to Pinterest

Well, that was fast; all of the figures from my core box of Dragon Tides are done -- and just when I was starting to have fun. Oh well, I guess I still have Zombicide and some 40mm samurai yet to paint.

Again, it was difficult to paint certain aspects of these figures -- faces and small details -- because the plastic bloated the original sculpts a little bit, but these are still some fun figures with plenty of character, and I hope to get in some games of Dragon Tides soon!
5 comments:
Email ThisBlogThis!Share to TwitterShare to FacebookShare to Pinterest 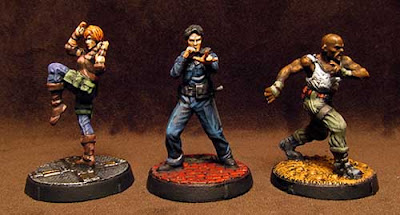 To my surprise, my copy of Dragon Tides arrived last week. Dragon Tides is a simple, fun, arcade- and campy-kung fu-movie-inspired board game of martial arts action. It's also the very first officially licensed game that includes Bruce and Brandon Lee.

Here, I've painted the first three of the eight figures that come with the core box (I will also be getting figures from add-ons (henchmen to beat up on!) and Kick Starter exclusives. I forget the names of these figures right off -- the two on the left and right are generic heroes created for the game. But the center figure is Brandon Lee dressed as a cop.

Coming up, there are not-Dolph Lundgren, Jet Li, Donnie Yen and Bolo Yeung! So yes, a nice collection of great personalities (who are all oddly treated as villains -- Lundgren and Yeung, I guess are OK to be bad, but I want to play Donnie Yen as a good guy). That's just who's in the core box. Yet to come are (not versions of) Steven Segal, Chuck Norris, Brandon Lee as the Crow, Jackie Chan, and Jean Claude Gosh Darn.

Figure quality:
Good and bad. The material is a solid, soft plastic -- something between Reaper Bones and Zombicide. It feels tough and solid enough to it will bend a little but not snap; in the end, I like the material -- it works well. I use Army Painter primer and paint as usual; no issues at all.

The quality of the sculpts are OK. My only complaint are that some of the faces and the details are a little shallow, poorly defined. But it's nothing some good, patient painting can't handle. Major areas such as folds in clothes are much better and provide some nice areas to layer that paint into high-contrast highlights.
A side note: the bases are integral and solid. Each base also has some artistic features unique to each character, all simply for art's sake. I have no issues with the bases, but if you like to rebase your figures, you'll need some patience and a steady hand to cut away the original base.

Despite a couple of those shortcomings (mostly in the smaller details), these figures have attitude! It's nice to have some great martial arts minis finally. I am glad to have them in the collection, and I think they will end up being one of those collections that I will take joy in painting.

One last note on the figures: They are tall. Taller than even heroic scale Reaper figures. The Brandon Lee figure measures 40mm from his feet to the top of his head -- yeah, that tall. So they won't really fit that Zombicide game. But, with the addition of a box or two of henchman (I got two), these masters will have plenty of asses to kick up and down the streets. It would be nice to have slightly smaller figures I could use in other games, but at least the taller sculpts make for some easier painting.

Game: I have yet to play the game, but the general since I get from reviews is that it's a simple, action game with little depth, lots of randomness and plenty of fun. 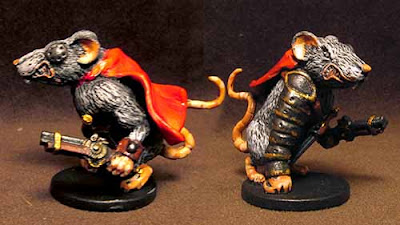 I finished painting the riders from Tail Feathers. Here they are in all their glory! Next up on my table are some Zombicide: Black Plague figures. The survivors may take a little while (with my up-and-down schedule,) but the zombies will take all of an hour :) 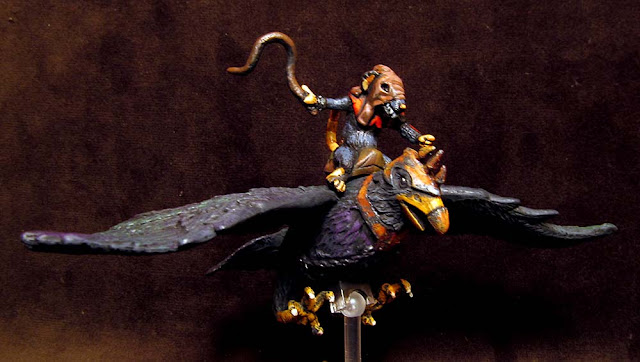 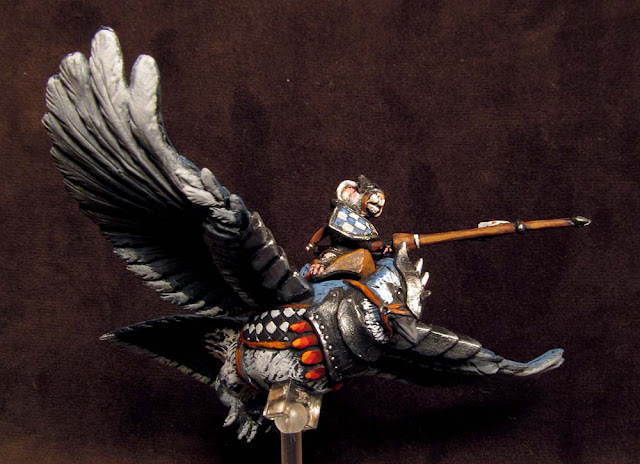 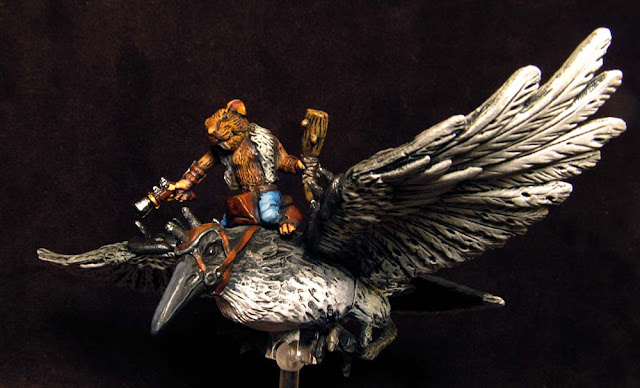 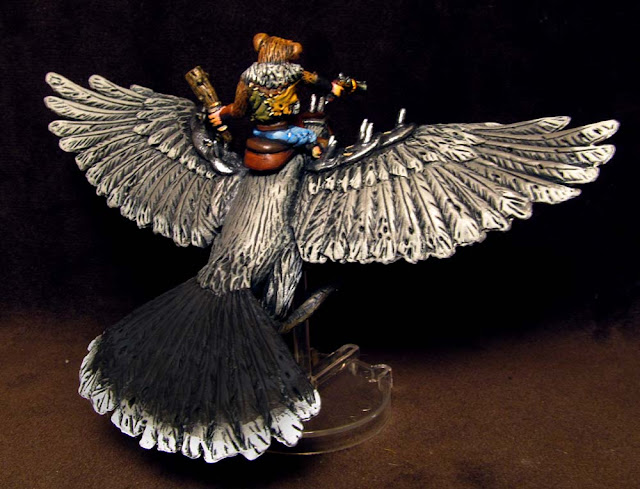 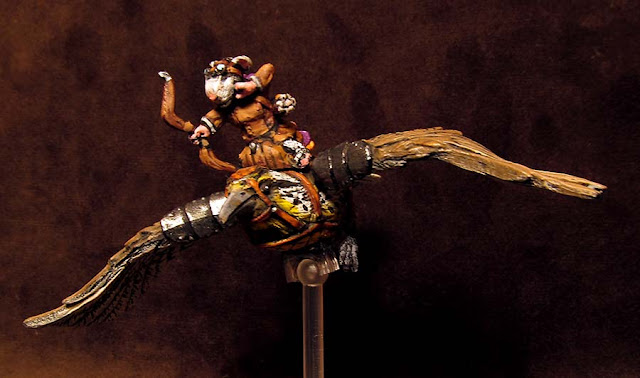 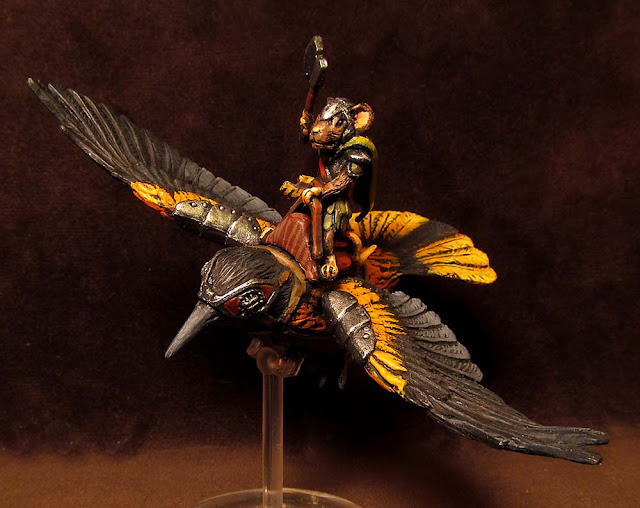 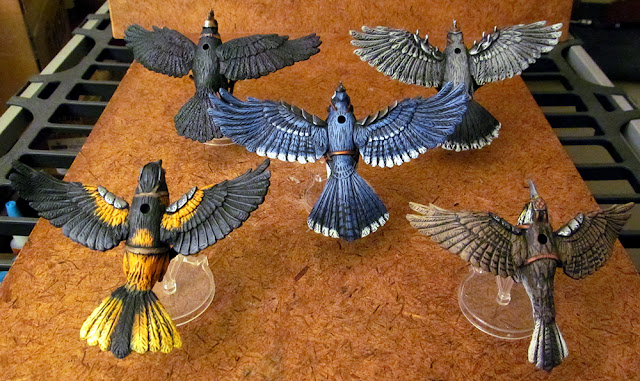 It's been a busy holiday season, and I've actually been getting quite a bit of painting done. I still have three riders yet to finish before completing my Tail Feathers collection. I'm still debating whether to purchase a second copy -- it probably won't get a lot of plays with my circle of friends, but I really do enjoy painting those birds (and I'm sure I could house rule some of those Oak Guard into Mice and Mystics.)

In the meantime, I'm conjuring up some ways to store my M&M figures in foam (that will fit one of the base boxes.) I'll let you all know how that goes when I solve the problem. (It's actually mostly solved -- I found some pluck foam with 10mm squares, which makes things much easier to organize.)

I also got some of the most fun figures I've seen in a while: Break dancers. These are 54mm, Little Green Army Men size (and the same soft plastic.) Thanks to Army Painter primer (Testors dries tacky on most soft plastics), I can paint these!

I had such a good chuckle when I first got my hands on these that my new Zombicide: Black Plague figures got pushed to the back of the table (no worries, Z-cide will move up fast.)

These are just a few of the figures I have; there are around 20 in the collection (two of each pose.) They also came with three separate boom boxes (I painted them already: one is black, one silver and one in construction yellow.)