Flashpoint; Fire Rescue will soon be shipping; that was my first venture with becoming a backer on Kickstarter. Such a fantastic way of discovering (and helping to fruition) cottage industry board games. 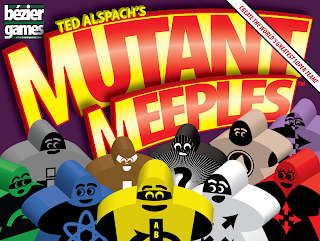 Anyway, the new game I've backed is called Mutant Meeples. It's much like Ricochet Robots except each meeple (which take the places of the robots) has a special power modifying his movement. Also, once you've reached the target location, you can no longer use the meeple with which you reached the target. This gives players who are behind an advantage to those who are ahead.

There are 8 (supersized) meeples, as well as an expansion adding two new meeples and some tiles to modify the board.

That's the incomplete gist of it; head over to Mutant Meeples' Kickstarter page and check it out for yourselves. (The video is cute, too) : http://www.kickstarter.com/projects/tedalspach/mutant-meeples

Information at Boardgamegeek (Not a lot there yet): http://boardgamegeek.com/boardgame/109969/mutant-meeples

Note: Bezier Games (who created Mutant Meeples) didn't pay me for any advertising. In fact, no company I mention ever pays me to solicit for them. I just enjoy posting about things and games I like, or, in this case, new games I think are good to support.
Email ThisBlogThis!Share to TwitterShare to FacebookShare to Pinterest