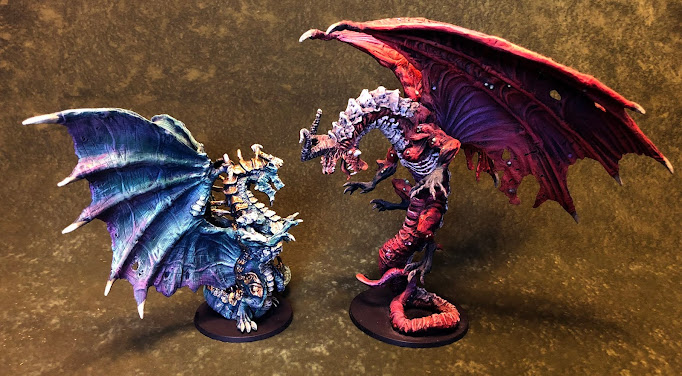 Both dragons were heavily drybrushed in layers (going from dark to light). To add some vareity to the skin tones, I drybrushed some purple, trying to blend the edges as best I could into the base skin color below. I blocked in the boney plates (drybrushing the highlights) on the necro dragon and the metal armor on the feral dragon. Then the details (teeth, eyes etc) were added carefully later.

They make quite the display on the Zombicide (Black Plague) board, and add an element of gameplay that isn't too overwhelming. My wife and I looove the Zombicide series; despite its shortcomings -- lack of variety in missions, simple gameplay, repetitive nature -- we still love it for its co-op nature, and as a vehicle to allow us to field epic characters, moving, slaying, and laying waste to the hordes of walkers, runners and fatties.

We've even made several custom characters -- including cards -- to add to our collection, which is still not yet finished being painted (but it's close!!!) Her favorite survivors/teams are the dwarves, while my favorites are the barbarians and bug guys. We're also partial to elves and good old-fashioned, run-of-the-mill, medieval fighters.