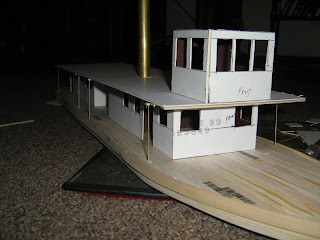 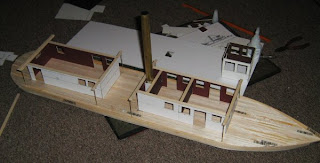 OK, so as far as it is coming, the class of ship my recent project most resembles, I would say, is that of a turn-of-the-century Nile river steamer. But this one is meant for rivers across the world including the Congo, the Yangtze and the Amazon.
I ordered a few extra bits- liferings, hatches, wheel and anchor- that will be arriving in he next few days. I still need to hunt down a gun for the foredeck, and a couple machineguns. I'd like some Lewis guns, but it looks like my best bet will be maxim machineguns. I hope to be able to get the armament from Copplestone Castings.
She still has no name, but I have a few ideas: Fleuve Perdu (French for Lost River); Kurtz (after the famous Heart of Darkenss character); S.S. Reckless, a good pulp name; S.S. Daring- also pulpish; and the Sophie, just a nice woman's name.
Email ThisBlogThis!Share to TwitterShare to FacebookShare to Pinterest