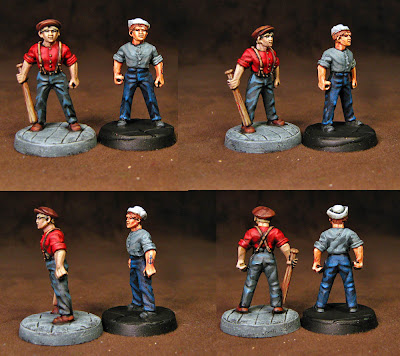 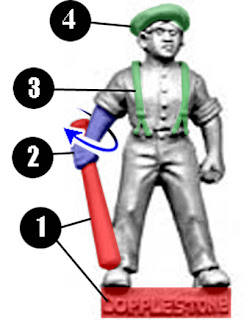 I began the conversion by (1) clipping away the slot tab (since I'd be pinning the figure to a homemade urban base) and the bat (since the game is about fighting with fists, not cheating with weapons.)
(2) The next step was important: With the bat cut away, the arm was in an akward pose. I needed to rotate it into a more believeable position. This was accomplised by wrapping the arm with a thin piece of heavy paper (so that my pliers would not ruin the surface of the mini) and carefully rotating the arm with a pair of needle nose pliers. MUCH better; now my sailor looks like he's puffing his chest out and clinching his fist, challenging other fighters to come forward and get their blocks knocked off!
(3) Not many sailors wear suspenders (or old sports caps), so these were simply filed off. The suspenders on the baclk of the mini were more diffulcult to remove because the mini's back is concave where my files could not reach. I solved this problem by filing as much as I could, and covering up the remainder with greenstuff. At this point, I also made the sailor's hat. Surprisingly, this was a difficult shape to make for as simple as it looks. Plus, I had to make sure it was the right size.
I did not saw off the mini's orginal hat (4), because even a razor saw will remove extra material, and I needed as much head and hair on the mini as possible to make the sailor hat look good (and look correct.) So I filed the hat down to the ears and at an angle. When I reached the ears, I used needle files to clean up any excess metal. The sailor hat was glued on, and that was it!! Painting was easy, though, I'm a little out of practice; I've been teaching myself to sculpt and convert and build. It's time I get back to painting with patience.
Still, the sailor came out better than I thought it would, and he will make a nice addition to my collection of fighters.
Email ThisBlogThis!Share to TwitterShare to FacebookShare to Pinterest