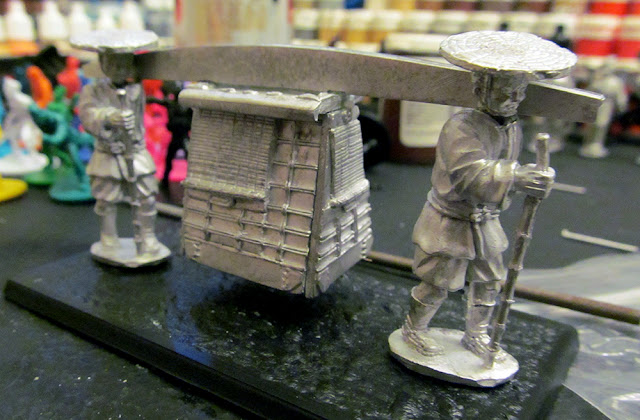 Thanks to Allison for letting me know that the "Kago" is actually the simpler, commoner's version of the Japanese palanquin, and that the more elaborate versions are actually called norimono, though, I think mine is a little on the low-end side of elaboration compared to some of the museum pieces I've seen.

Still, I will continue to call it a kago, only because it's shorter to type :)
Anyway, here is mine all assembled. Ideally, the larger kago should have four carriers (I think,) but I didn't want this model to get too overwhelming.I think a four-carrier version of this model could easily be made with the addition of a longer yoke and two more carrier figures.

To give you an idea of the size, the base these are on is 50mm x 100mm (figures are 42mm). The next thing I'm trying to figure out is if I'm going to paint the carriers and then afix them to the kago yoke, or assemble the how thing and paint it all at once. Has anyone here done something like a stagecoach or wagon with team? How did you approach the paint? Everything as one piece, or each element separately and then assemble?
Email ThisBlogThis!Share to TwitterShare to FacebookShare to Pinterest