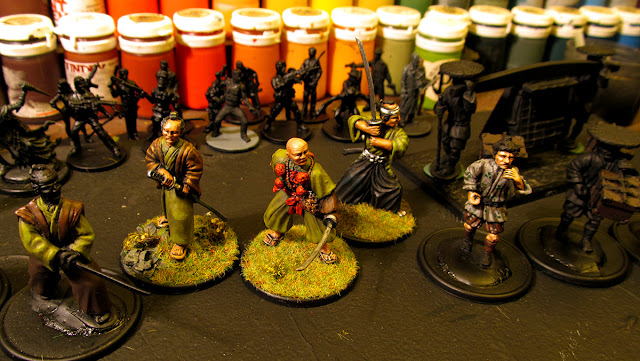 I'm still working on my samurai. I'm trying to finish up the previous order of samurai which will form the core of my new clan (so that I can have two clans to fight one another.)
Once they're finished, I just have some baggage carriers to paint up before finishing up with my kago/norimono/palanquin.

On the side, I've also been doing more of my Mouse and Friends art as well as working on a book for them. 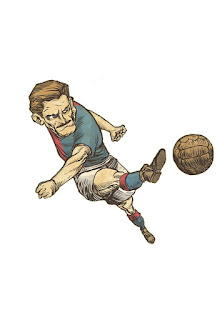 Check out the Soccer City kickstarter, which has just a couple days left to run (and has made its goal.) Definitely not for everyone -- it's soccer, a sports boardgame, and the look is all retro (1920s-30s,) but it's something different than the usual.

It also has minis!! (at an added cost.) At first, I was a little put off by the high price for the minis (which is reduced if you get the package deal,) but then I saw that the figures will be 40mm; that will make for a great-looking game. Each team you purchase will have 11 figures, though, you'll only have eight + the goalie on the field at any one time.

The other thing about the figures is that it looks like they're being sculpted to match the art -- cartoonish -- so, again, not for everyone. I know I will at least enjoy painting them (and playing the game.)
Even if you don't plan on pledging, check it out here.
Email ThisBlogThis!Share to TwitterShare to FacebookShare to Pinterest