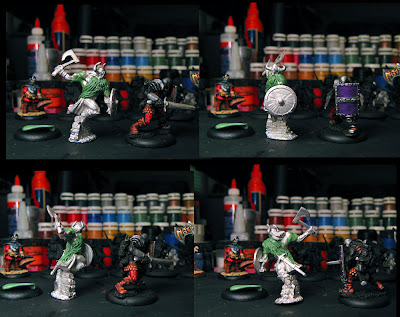 Well, I figure, as long as I'm not posting too many finished items, I should at least post what I'm working on.
The figure to the left is a newer viking from Reaper (Amon, Viking Warrior 3385), and the figure to the right is also Reaper (Urich, Adventuring fighter 3282.)
The viking, I picked up on a whim; I wanted a go at a beard with greenstuff. It looks ok. It's not as spectacular or graceful as I had hoped, but at least this viking certainly has his beard on.
Uric is actually a figure I've had for a while; I just never got around to painting him. He has been slightly converted. I'll cover that conversion in more detail when I post the finished figure.
Otherwise, the rebasing project is going slowly. I'll get the seadogs rebased for sure, but I'm not sure when I'll get around to repainting those that need it.
Email ThisBlogThis!Share to TwitterShare to FacebookShare to Pinterest