Vacation time- time for a project?

So I have a vacation coming in the middle of May. I recently picked up a PDF copy of T 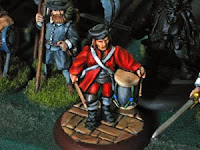 wo Hour Wargames Chain Reaction/Swordplay rules (available FREE!) And I have some old Foundry Swashbucklers I'd like to use. But I forgot how ugly the basing was. My tentative plan is to rebase the 20 or so figures I have (see pictures for some of them); they'll be switched from flocked coin bases to flagstone display bases (just like the drummer shown.) I'd like to use them for urban street fighting/skirmishes.

Of course, this may change. I change my mind a lot when deciding on what to paint. That's why I don't do a lot of reigments or large groups of figures anymore. In fact, if I get in the mood to do regiments, I already have an Empire army that needs repainting (you can see that many-year project began with these crossbowmen and gunners).

I do have some Swashbucklers I've already began repainting and rebasing for adventures in the New World; I'll leave these alone. Though some that were primed and ready to become New World adventurers now will become swashbuckling street fighters.
Email ThisBlogThis!Share to TwitterShare to FacebookShare to Pinterest