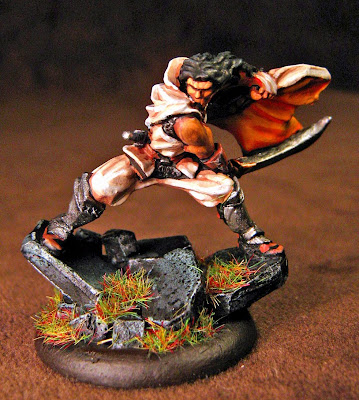 I decided against entering this into Steve Dean's painting comp. I don't think I lack the skill to be a contender; I just don't think this figure is yet good enough to beat what others enter into that competition.
The tab and integral base were clipped away, and the figure mounted on a base of dark rocks made from Sculpey. On the figure itself, I clipped away some of the cape because it was making the figure top-heavy (since the figure had been raised higher on the rocks.) This figure is inspired (again) by Conan the Cimmerian, this time as he might have appeared during his days as a hetman of the Zuagir. Since the original figure was a vampire, the addition of the long hair was also helpful in covering up the pointy ears.
This figure is almost exactly as I imagined it in my head, except the part where it's supposed to look like a Golden Demon entry; I still need to work on that.
Email ThisBlogThis!Share to TwitterShare to FacebookShare to Pinterest