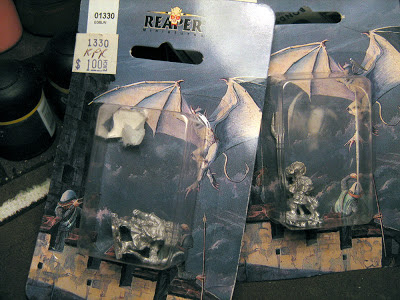 They're Reaper No.s 1329 and 1330. I wish I had a little more info (mostly a year) to attach to these just for a little historical posterity. They're certainly not the oldest figures I've painted, but they still retain a little of that old-school look I am starting to prefer these days. I'll probably paint them yellow-green to add to my friend Jeff's small collection of old school stuff. The New Dungeon Box was actually given to me by Jeff, but I'm painting it up slowly but surely and giving the box set back to him (along with the few random goblins and other old-school trinkets he's piled on my table.)
Email ThisBlogThis!Share to TwitterShare to FacebookShare to Pinterest