The theme here is supposed to be a Japanese garden, but when it's done, it won't look anywhere close to as prim, balanced and intricate as a true garden. But it will still provide a great arena for playing duels and small skirmishes with my 42mm (Steve Barber Models) samurai.

My original idea was to do a hill in the middle of the board, but that sacrificed a lot of playable space. With the hills pushed to the corners, I have fewer slopes to deal with (though, the larger-scale figures don't tip as easily; it's almost a none issue.) I also like having extra flat space so I can add trees, buildings and other terrain to customize each game.

I started with a large drawing board (25x20 inches) I got from Hobby Lobby. I took off a couple paper clamps that were on the board -- this left me with some great small holes to pass cables through so I can hang the board on the wall. The sketch board also has a handle built in, so I can carry the board around easily.

I stacked some blue foam and cut it with my foam cutter, slicing out some gentle gradients. I also used the foam cutter to cut the pond out of the ground board. Everything was glued together. I used paper mache to cover up the seams where the hills met the ground to provide a smoother transition.

The rocks are all real. Primed with black and drybrushed. (With a porous surface, these rocks take primer and paint like a champ.) I used generous amounts of epoxy resin to secure the rocks to the board, especially if I'll be hanging this board on the wall.

After the glue dried, I covered the board with acrylic (craft) paint. I also painted the bottom of my pond. I used a muted dark blue and added black toward the center of the pond to show where it is deeper. I know people say don't use blue, but screw that, it still looks good. (I guess, just don't use any bright blues.)

And what the hell, it's a Japanese garden. It needs Koi. These were surprisingly easy; they were just a few tiny random strokes of white and light grey, followed up with random stipplings of a couple shades of orange. I also have a large stepping stone (large enough to hold one 40mm base) that will go into the pond between the two schools of fish.

I originally intended to put a nice Japanese bridge over the pond, but that can wait until I find a nice bridge model (that will fit my large samurai) or get around to making my own bridge.
I'll be pouring some two-part epoxy resin into the pond to complete the water effect, but first I need to add grass to the whole board; I plan on putting grass all the way to the waters edge (no rocky/muddy bank this time around.)

For large-scale bushes, I want to pick up some Woodland Scenics foliage "clusters" which are much larger than the usual foliage clumps used on many minis bases. These clusters will be placed among the rocks to create little groups of landscape that will help separate the board into areas, providing hiding places for ninja, and forcing fighters to choose lanes during maneuvering.
My local hobby shop -- the only place I think has the clusters -- isn't open today, otherwise, I think I could finish this board. Oh well, I think it will certainly get done this week. Then the samurai will have a nice place to spill blood. 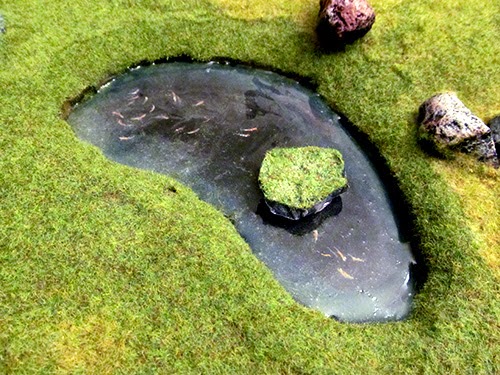 I applied the grass and the epoxy resin to the pond. At this point, I can call this finished, but I'd still like to add large bushes along the rocky areas. I'll be hittin' up the hobby shop soon.

The two figures in the photo are 42mm samurai to show the relative size of the board. It's not a huge board, but it's certainly big enough to accommodate a half dozen figures on each side of a skirmish. (I use THW Red Sands Blue Sky rules which work wonderfully for samurai.) 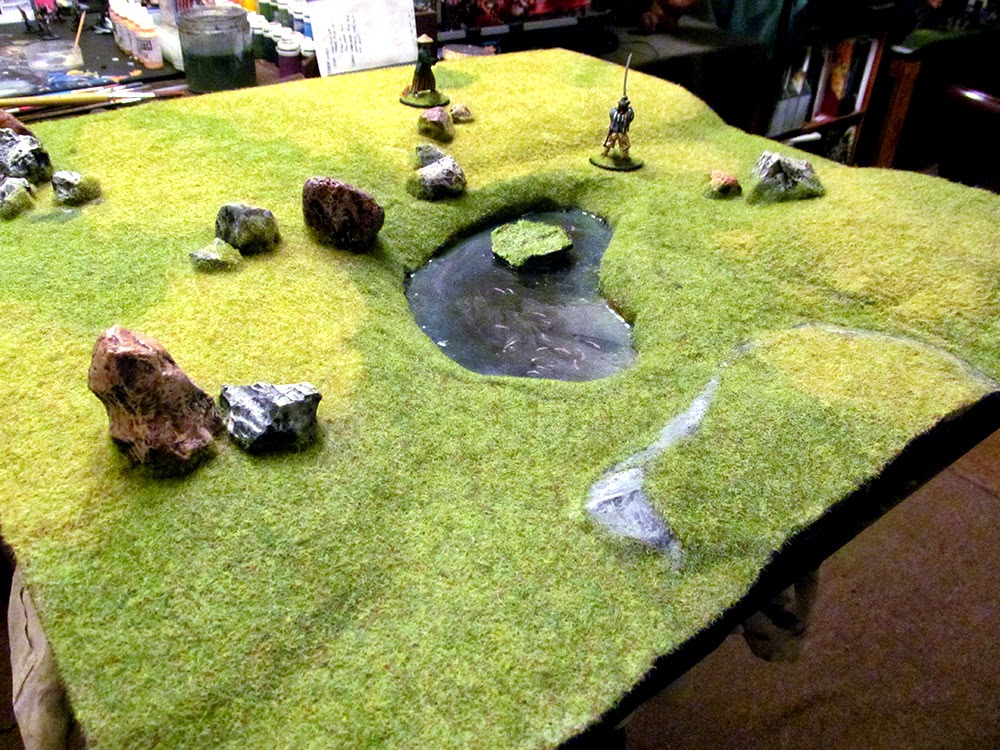