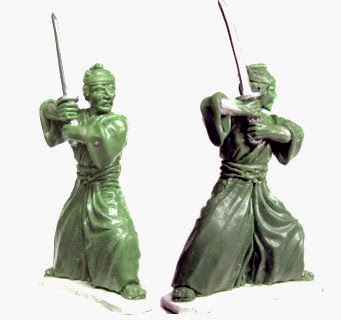 Steve Barber finished sculpting my latest commission, and it looks lovely as always. In this samurai, I wanted a new pose of the classic unarmored samurai. I believe the specific name for this stance is hasso no kamae.

I'm guessing the blade is a separate piece (as is usual for Steve's samurai). If you like making your own weapons, this will allow you to add your own blades for katana, wakizashi or maybe even a nodachi. I bet I could probably even arm this guy with a kanabo with little trouble.

The head is also separate allowing you a lot of choices as to what you want this guy to look like. There are around a dozen heads to choose from among all the figures I've commissioned. I don't know if Steve has put it in his catalog yet, but you could probably ask to buy a "head pack" with your next samurai order.

My original thought with this figure was to have him wearing a Kataginu, which has the exaggerated shoulders you see on some samurai, but I decided to keep them off because it would be easier to add some with green stuff than to file off those that were already sculpted on (Steve Barber uses good metal.)

An unintended result of leaving the kataginu off was that the figure is nice and clean with very little clutter. The only thing breaking up the kimono being the sash and the folds; this leaves a nice large canvas for painters to spread color and to brush with a loose hand. The folds give you a chance to practice layering and highlighting, and the unbroken swaths of area leave plenty of space if you like to paint nice patterns on your kimonos. So I think this is a good figure for both beginner and advanced painters.

When he goes into production, I think this sculpt will be good fun to paint. And he will make a nice addition to the collection, guarding the halls, roads, and gardens of my table.
Email ThisBlogThis!Share to TwitterShare to FacebookShare to Pinterest