Busy week at work kept me form the painting table until today. This fisherman was converted from a brand new figure in Steve Barber's 42mm samurai range. The original figure is a baggage carrier for a kago/norimono retinue, but it is easily convertible into a few different figures.

Here, instead of baggage, I've given him a rod (made from brass rod and twine.) The bucket is a thick disk of sculpey with a random bit to make it look like it has a center-hinged lid. I drilled a hole through the lower hand and passed twine through it and the bucket to create a carrying handle. The satchel on his belt in back is made from green stuff.
This was a fun figure to make. It's also the first civilian I have in the collection, now. With more to follow! 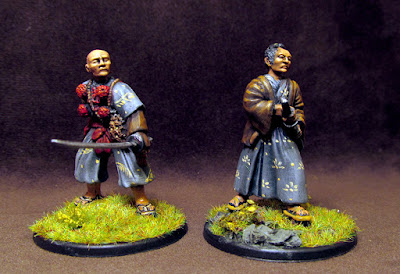 I also finished up a couple figures from the last bunch I bought from Steve. I'll probably try a different color scheme -- the gray is ok, but I think I'll go with a slightly olive green instead. Yep, it means I'll probably paint over these -- the clothing anyway. It wont be too difficult. They are in the same scheme because I'm going to make this batch into a new clan (I already have one clan; they need rivals.)

The master to the right is unconverted. The yamabushi to the left has a couple changes from the original figure: I used the bald head of a monk archer instead of the one with the little yamabushi cap. And instead of the bo staff held in the back hand, I made him a katana to hold in his front hand. 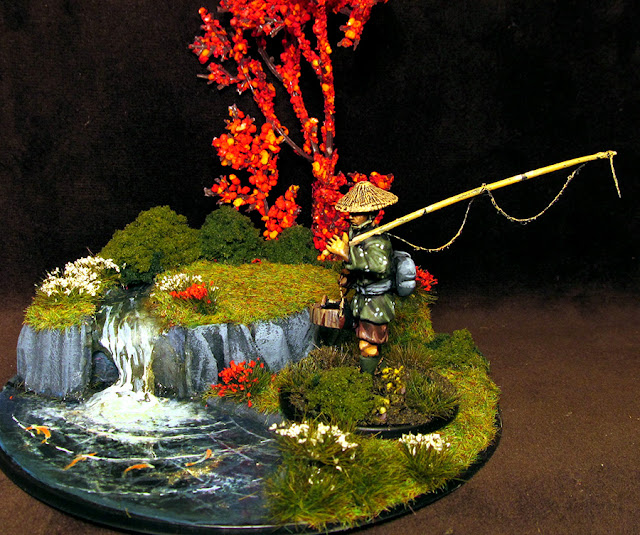