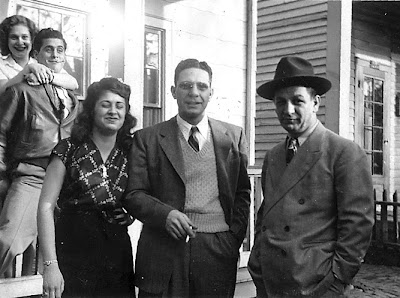 So I hear that Two Hour Wargames is making a pulp boxing game. They already have Friday Night Fights which is a straight-up boxing game, though, with minor variant rules for bareknuckle and street brawling. It's a real beer and pretzels game, but of all the Two Hour Wargames I own, this is the one I play the most.

I modified the rules a bit to add some maneuvering. With the ability to move added, that gave me a chance to model some terrain to fight around. I kept it basic. I bought a wooden plaque from Hobby Lobby and painted a simple boxing ring. Done. I tried a few games on it with my maneuver rules, and they worked out well. So  I turned the plaque over and painted some basic gray squares. Then I built a few components to make up a back alley: Dumpster, trash cans, pile of trash bags etc. That was a couple years ago.

I've since played many games on this board. When I found out Two Hours was working on a Pulp-specific boxing game ("Smokers," a term applied to pulp-era boxing), I dug everything back out. The new game is supposed to take place in the back alleys, wharfs, dives and dens of pulp-era port towns (as far as I can gleam.) I looked through my collection of terrain and suddenly realized I had bits and pieces to make a couple more venues. Now, I don't know exactly how Two Hours is doing the game mechanics-wise, whether it will actually be on a grid (probably not), or if it will use minis (probably will) or if different venues will make a difference (I'm guessing yes). But it was still nice to get all my stuff together and have another play at an older Two Hours favorite.

Below are pics of my original ring (which I think I may actually model now to complete this collection), as well as all the new venues, which all use the same board, just with different modular pieces to set a variety of scenes. I'm trying to think of other scenes I could build stuff for- pipes for a basement steamroom or factory floor; conveyor belts and tables for a cannery or fish market; tables, bar and a billiards table for a pool hall; or ropes, crates and cargo for a wharf. I'll wait to see how the new game is before I build anything new, but I am looking forward to the new game.

Lastly, before we go on to the photos: The photo at the top is of a true-life "smoker." The fellow, in the center, coincidentally with the cigarette, is my great uncle Frank "Scrappy" Saluzzi. He boxed in small halls and dens in Kansas City during the 1930s and 40s.