Ads and aft; Pulp street and my ship's interior

A couple things to show here. The first is from my gangsters (well, for my boxers since my gangsters are all in black and white.) I took my newspaper stand and added a bunch of "spicy" girly posters on the back. I also made an ad post with more period posters including movies, booze, races, cigarettes and fight bills. The post was easily built: It's two wood blocks based and topped with 25mm slotta bases. For the posters, I simply did a Google image search, Reduced everything in Photoshop, and printed in color. Cut, paste, done.
After doing this project, I'm leaning more toward doing a set of Copplestone Gangsters in color for my next project.

The second item is another continuation of an old project. I've finally started finishing the interior of my river steamer. Here is a pick of the unpainted crew quarters showing the bunks and the galley in progress. Nothing is glued in yet- I will paint it outside of the ship before installing it. This was all a mix of wood, greenstuff, Sculpey, brass, cardboard and felt, all of it scraps. There is also a set of lockers toward the aft of the quarters (this pic is looking for'd). All else I have planned for the crew quarters is a table across from the bunks. Later, I'll do the captain's quarters. I'd like to find a crew for this boat. There are a few figures out there, but I'd like to find something that's compatible with my Copplestone figures, sizewise. I like the Pulp Figures tramp steamer crew figures, but they are all much shorter than Copplestone's (at least as far as I've seen on the internet.) 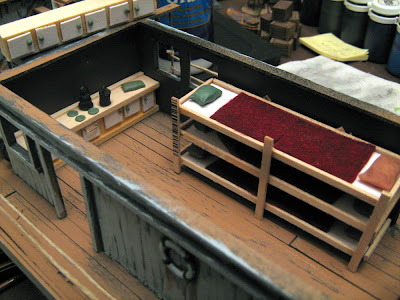