Custom tetsubo (and a Machinas game) 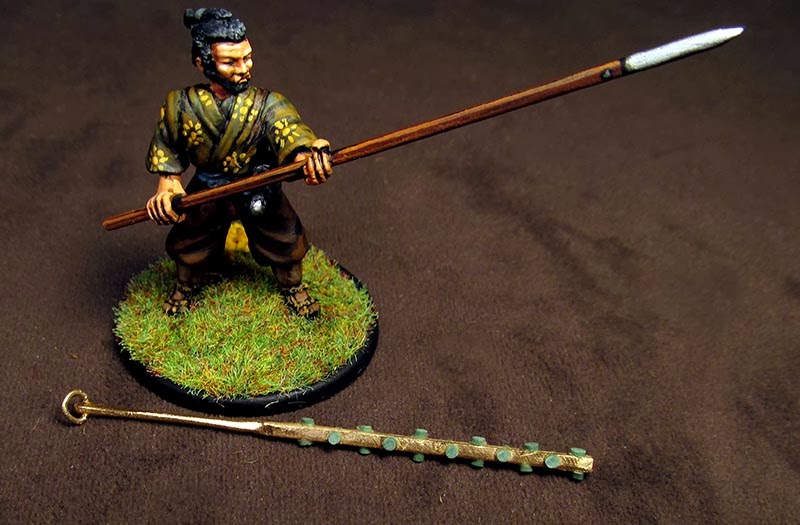 One weapon none of my samurai are armed with yet is an iron-studded tetsubo. So I went ahead and made my own. I started with a large-diameter length of brass rod and took my time filing it down until it had four long sides.

I drilled a hole in the end of the handle to accept a large ring I've seen in numerous photos. Then I cut studs out of a "rope" of green stuff I had sitting around. I glued the studs down, and that was that. After the superglue has had ample time ti fully set, I'll use a file to even out the taller studs.

I'll eventually get another copy of the figure shown in the photo, who will wield this bad boy in some wicked Japanese street fights. A final note: I'm not quite sure if this is a tetsubo or a kanabo. I know there is a wooden version of the weapon as well as an iron version; mine will be the iron version.

I ran a Machinas game for my friends this weekend. It started off slow as they learned the basics of the tables and jockeying for position, but once they knew what they were doing, they really got into it. I knew they were having fun when the sass started flying. They had more fun than I had expected (they're more the Euro-gamer types.)

It was also great to see passing strategies develop early; the players didn't just set up to pass, they kept an eye on what was going on further ahead when planning their passes (I wrote a strategy guide for passing in Machinas, which will either be posted to Two Hour Wargames blog or released as a free supplement.)

It was a good time. They learned the game and raced a three-lap race in about an hour and a half. One last thing, you can see in the photo the footprint of the game. The actual gameplay area in the center is barely a foot square. Then each player has his "dashboard" cards in front of him. This table (about poker size) easily had space for a six- or seven-player game. The game, with extra cards, and a little extra space (a dining room table perhaps) can accommodate a 10-player game.

Haven't pledged yet? Go check out the Indiegogo Machinas campaign.
Email ThisBlogThis!Share to TwitterShare to FacebookShare to Pinterest