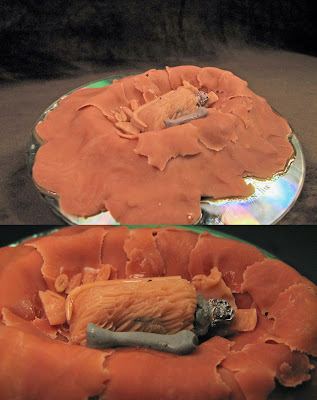 So I'm still using Sculpey. Here are a couple projects incorporating the medium: One is a firemaker for my prehistoric tribe. He is an ancient German figure from Foundry (but sculpted by Mark Copplestone, just like the rest of the tribe.) The sculpey bit here is the fire lantern he is carrying.

To do the lantern, I first sculpted tiny tusk/horn/bone bits. I baked them then glued them together with superglue. The bottom "plate" of the lantern is a scapular (shoulder blade) piece I had sculpted earlier (don't throw out anything you sculpt with Sculpey.) Once the glue was dry, I then place a small glob of greenstuff inside the lantern and sculpted a small fire burning over some tender. Wait 24 hours; glue to an unpainted figure; prime and paint!

The burial sit was larger but much easier. The longest part was actually building up the burial mound/hole. The bulk was built up over aluminum foil (see earlier post about building a prehistoric hut.) The hides were made (as explained in that earlier post) and used to line the grave. Tools, a small tusk and a large femur bone were sculpted to accompany my caveman to the afterlife.
The caveman is another Foundry ancient German (great alternative cavemen.) I used pliers to squeeze his arms together and straighten his legs a bit. Then I wrapped him with a flattened piece of sculpey. I engraved some fur into his covers and threw everything into the oven.
"You threw a lead/pewter figure into the oven?!"
Yep. 275 degrees for 40 minutes didn't melt him.
Once everything was baked, the mound was glued to a CD disk, and the covered body was glued into the grave along with his tools and trophies. As I write, the burial site is sitting in the back room drying from a coat of primer. I hope to finish the piece today.
I love the burial site. I remember going to the Museum of Natural History in Washington, D.C., with my dad and seeing a life-size diorama of a prehistoric burial site. So now I have myself a little token of that memory, also a nice terrain piece and objective marker for prehistoric games.
Email ThisBlogThis!Share to TwitterShare to FacebookShare to Pinterest