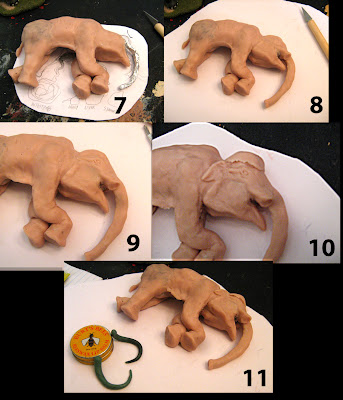 It's the second day I've worked on this project, but I worked for an hour, so I have two and a half total hours invested so far. I spent most of this session working on the head and trunk. The head is a little oversized for the body, especially the jaw, but I don't think it will detract too much from the overall piece.
The tusks are made from greenstuff. While I wait for those to cure, I'm going to practice sculpting fur and hair. Then I will "wooly-ize" my dead mammoth. Once the fur is added, the carcass will be ready to go into the oven at 275 degrees for about an hour to an hour and a half. I will then sculpt some organs- some to go inside the open body cavity and some to be strewn about on the base. The final assemblage will be of the tusks to the head. This will happen tomorrow; I'm going to give the tusks a full 24 hours to cure.
Among the harvested organs will be the intestines, stomach and heart. I'll practice sculpting some adipose (fat) tissue as well to spread about the open torso of the mammoth. Oh, it will be a gruesome scene.
Email ThisBlogThis!Share to TwitterShare to FacebookShare to Pinterest