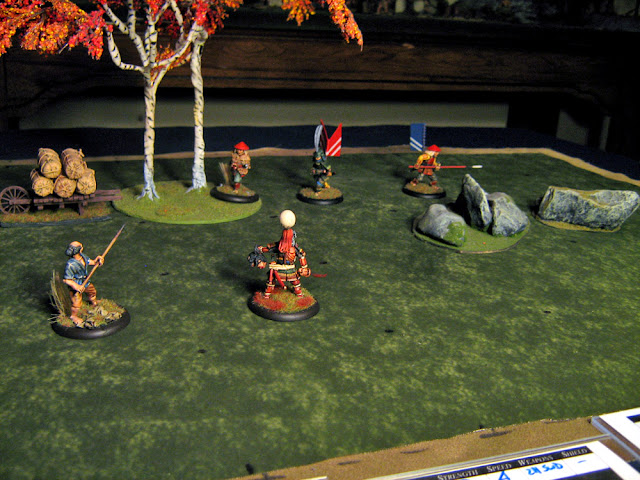 One of the things I like about Red Sand, Blue Sky (gladiator rules from Two Hour Wargames) is the ease at which you can re-skin it. Here, I've adapted the rules to a samurai skirmish game (using 42mm samurai from Steve Barber). I didn't have to change much -- no shields, no net attacks, and no mercy of the crowd or imperial intervention -- otherwise, I didn't have to change a thing with the mechanics. I'll have to write down some basic terrain rules, and I still haven't figured out rules for bows and muskets. I'd also like to figure out how to incorporate ninjas (when you have the figures, you just have to use them!) Otherwise, this game is good to go on my table.

There are other skirmish/battle games offered by THW that have mechanics better suited to dealing with multiple figures and other factors/reactions on the battlefield, but I like using RSBS because it simplifies movement (no more bumping terrain and figures while you measure with rulers.)* This is a biggie for me (and my friends) who are all boardgamers (and NOT big miniatures gamers.) It is a good compromise that is easy for the group to accept and play. I also prefer RSBS for the smaller skirmishes because I like doing battle where specific hit locations are involved. 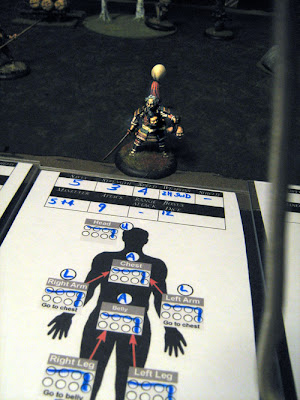 By the way, if you're not into samurai, Red Sand, Blue Sky also makes for a kickass Roman gladiator game.

* For the uninitiated, RSBS uses a zone movement mechanic; most figures move one zone at a time, and a maximum of three figures can occupy any one zone (though, others can try to force their way into a zone while forcing someone else out.) If you look at the top photo, you'll notice black dots on the field; these are what dilineate my zones.
Email ThisBlogThis!Share to TwitterShare to FacebookShare to Pinterest