Update about Victory Point Games
I emailed a couple questions to VPG and got a touch more info that I thought was interesting: Alan, over at VPG, tells me that the company is a "classroom," helping new game designers and developers bring their imaginations to fruition. I totally dig that. In fact, if YOU have an idea you'd like to develop, VPG has a series of articles to help get you started. Here's a link to the first article.

Alan also mentions that VPG doesn't take preorders, but that's because their games are printed on demand. I'll enjoy my copies of a few of their games knowing that those games are helping someone's budding career, and knowing that the game was specifically put together for me. (My first order, by the way, will be Nemo's War + the expansion and Zulus on the Ramparts +expansion, and maybe perhaps The Alamo Remembered.) Looks like I'll be having some fun after GenCon!

(Original post)
I have yet to play a game, but based on one read of one set of rules (Nemo's War), I think Victory Point Games is my next game company of choice. (Two Hour Wargames is still my all-time fav.)
What do I like about VPG? First of all, they have a wonderful diversity of your basic genres -- Science Fiction, ancients, Napoleonic, World Wars, sword and sorcery, Zulus, and zombies -- but they also have some stuff you don't see a lot of: Circus Trains (yep- manage a Circus train), Boxer Rebellion, French Revolution, Mountain climbing, Sherlock Homes, Space Opera, Tennis, Jules Vernes (the aformentioned, "Nemo's War," which I hope to purchase REAL soon), and (probably the best name for a boardgame ever) "Toe-to-Toe Nu'klr Comabat with the Rooskies," (inspired by "Doctor Strangelove.)

They also have a nice selection of highly rated (BGG) solitaire games among those genres. One example is Nemo's War, in which you play the title character himself, travelling the oceans spreading destruction, inciting rebellion and even undertaking scientific research. A few of the multi-player games may also be played solitaire.

Yes, it IS a small company, and I read that the bits and boards are lesser quality than usual (somewhere between print-and-play and professional), but, as they mention on their website, you're paying for the rules.  And many of its customers echo that sentiment on Boardgame Geek.

So I'm gonna give'em a try! I'll be ordering "Nemo's War" in a week or so. I may also throw in "Zulus on the Ramparts" (and the expansions that go with each game.) But what I really look forward to is their 1930s retro "Marooned!" in which 1-3 players try to survive being marooned on a remote and hostile planet. Both Nemo's War and Marooned! are designed by Chris Taylor.

GenCon!!
I'll be going to GenCon for the first time, so there'll be no new posts next week. Sure, I'm a miniatures guy and I'll be looking at minis there, but I'm also a boardgame guy, and that will be the focus of my visit. I'll be saying hello to my friend who works at Fantasy Flight Games (maybe I'll pick up Blood Bowl the card game), as well as all the fellas at the Hydra Miniatures booth (who were the first to print my art on the cover of anything ((the back cover of the War Rocket rulebook.))

I didn't sign up early enough to get in on most of the painting action, but that's all right; I want to walk around and get a lay of the land for the (hopefully) next time I go.

Painting
You all may notice I haven't been painting a lot lately. Work has been rough (newspapers), and I've been doing the boardgame thing, but mostly, I think I just burned myself out on projects (NOT painting; I WILL paint more.) I had been doing so many projects, I couldn't pull myself to do just random individual minis like I used to. My next 54mm order is a small one (just three figures). I think this will help transition me to doing random figures again (with the occasional small project.) But, to be honest, I have been enjoying taking a little time off from painting. It has given me a moment to assess my collection and to see what I am ready to sell (28mm gladiators and vikings for sure) and what I might even give away(?)

Until I return to painting in earnest, I'll enjoy reading a few more books, watching a little TV, and devoting a bit more time to political cartooning at work (especially with the elections about to pick up ... well, they are picking up here in Iowa.)

If you find yourself on my blog and there aren't any new posts, there is still plenty of older stuff to look at; Pick a month and a year, and see what there is to see!

Hey, and don't forget to take a look at Victory Point Games! 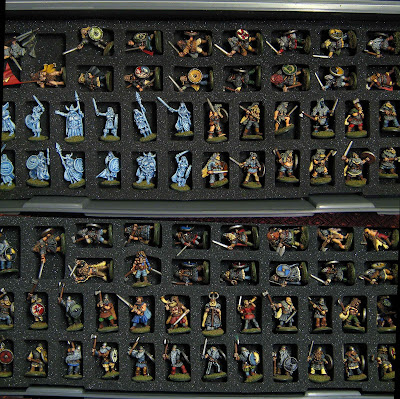 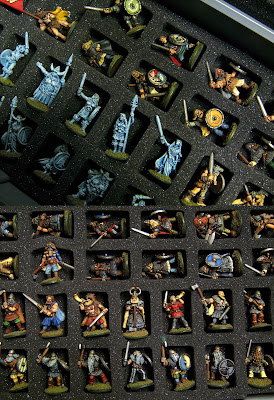